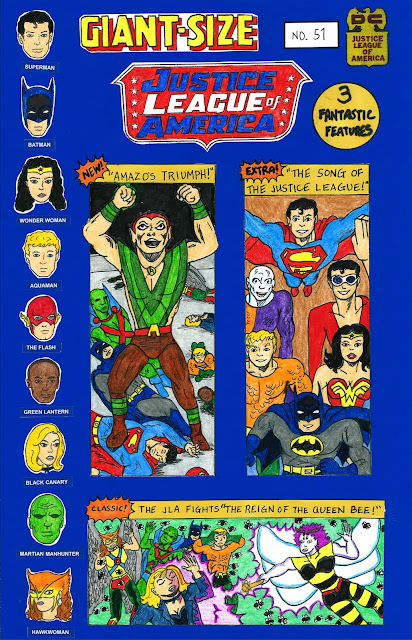 This is a special 50-page issue of my fan-fic JUSTICE LEAGUE!

BRAND NEW! An adventure featuring the return of Amazo, one of the JLA's most powerful enemies!  You must read
Amazo's Triumph!
Click HERE.

JLA FEATURE! A special feature for those of you who may not be familiar with Amazo we re-present a short origin featurette,
The Story of Amazo
Click HERE. 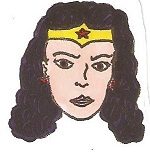 BONUS! As an extra we have an illustrated version of "The JLA Song" from the Songs and Stories about the Justice League of America" LP originally from 1968! 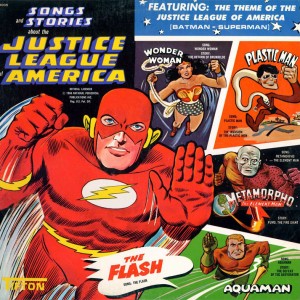 The Song of the Justice League of America
Click HERE.
FEATURE-LENGTH NOVEL!
Reprinting our very *first* JLA story, from waaaay back in 1991! 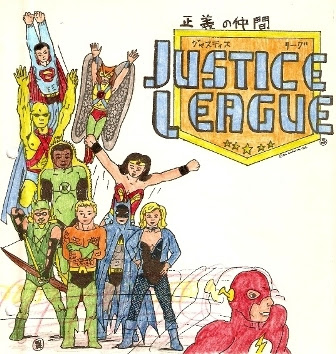 Posted by Russell Burbage at 6:05 AM No comments:

Welcome! Red Tornado here, ready to present to you an untold adventure of the Justice League!

This adventure came to light when I was reviewing our space station digital records...of a time before Zatanna, Elongated Man, Hawkman, or I had joined the Justice League!

This is a story featuring Amazo, that amazing android who absorbed ALL the powers of the original Justice League. And this time, he comes incredibly close to killing all of my friends! You must read,

Read more »
Posted by Russell Burbage at 6:04 AM No comments:

Justice League #51: The Story of Amazo! 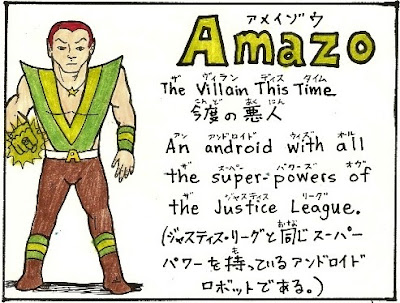 Aquaman here and I'll be your guide on this short featurette, "The Story of Amazo!" 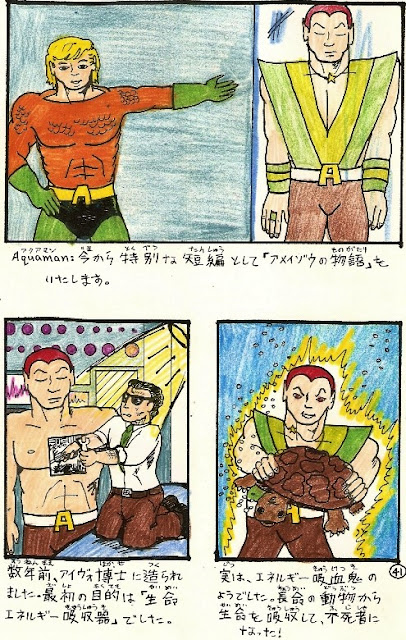 Amazo was built several years ago by Professor Ivo. His initial purpose was to absorb life energies.
He was actually an energy vampire. He absorbed life energy from long-living animals, and became immortal!
Professor Ivo intended to transfer his own brain into Amazo's body, so that HE would be immortal.
However, I investigated after finding several dead turtles and found Amazo! 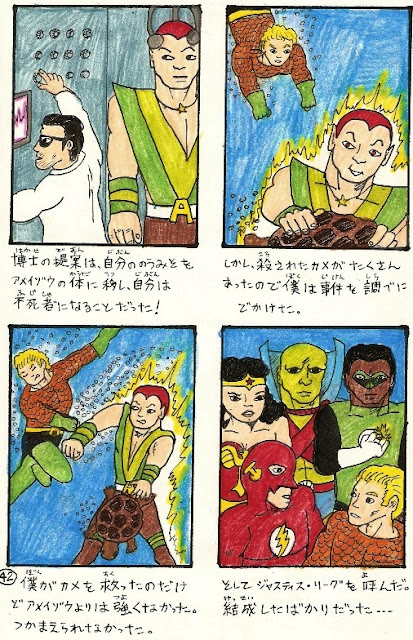 I was able to rescue the turtle, but I was not as strong as Amazo. I was unable to capture him.
So I called in the Justice League, which had only recently formed.
However, Amazo accidentally absorbed OUR powers! We were nearly killed! 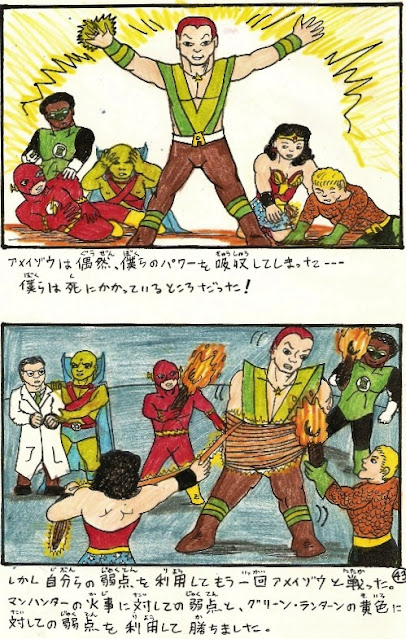 However, we fought Amazo again, using our weaknesses against him! Using the Martian Manhunter's weakness to fire and Green Lantern's weakness to the color yellow, we defeated him!
Since then, Amazo has returned several times. Each time it was a terrible battle, because he also absorbed our intelligence and we could never out-smart him the same way twice! 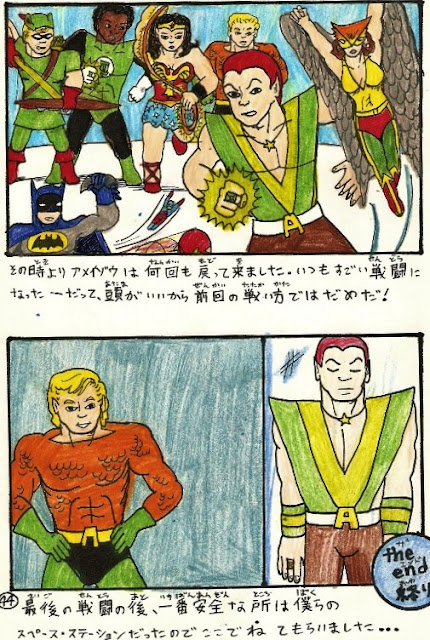 After our last battle with him, we locked him up in the safest place we could think of...our space station! He's sleeping here, still!
Return to Main Table of Contents
Posted by Russell Burbage at 6:03 AM No comments:

I would like to present something to you that is truly bizarre! If you are familiar with Power Records from the Seventies and Eighties, you may already know that there was an LP in 1975 called "Songs and Stories About the Justice League of America" that featured the Flash, Wonder Woman, Aquaman, and....Plastic Man and Metamorpho!?!? Read on! 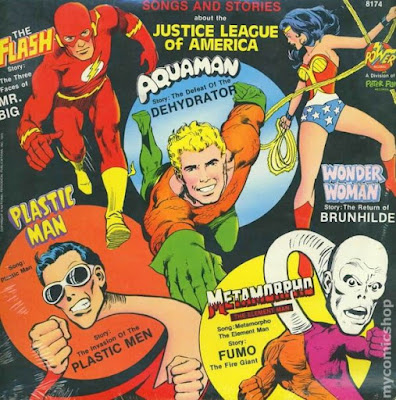 Read more »
Posted by Russell Burbage at 6:01 AM No comments: 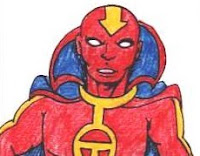 So, what did you think, Black Canary? Was that battle against Amazo as anxious for you to read as it was for me?

Yes, Red, that fight against Amazo was awfully nerve-wracking.... but I think for true fright, I would have to say that our first battle against the Queen Bee was my most anxious time as a Justice Leaguer! 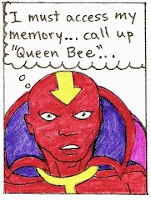 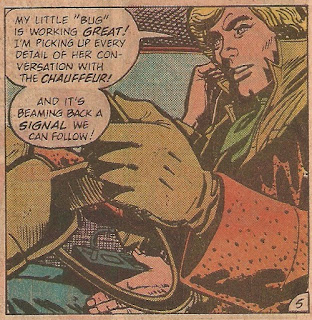 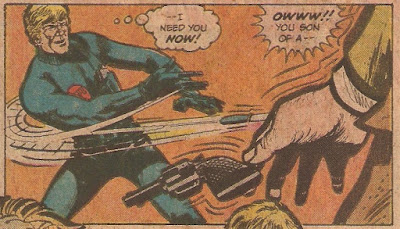 The JLA rushes to prevent a volcano from killing millions!

Introducing the new members to the press

The JLA vs Chronos!

The Secret Origin and History of the JLA!

VS the Injustice League!