So what did you think?

As I said in the Forward, I came up with this Queen Bee story at the same time I thought up the stories  that will be numbers 33 and 34. I ended up making my come-back with this story for two reasons. One, because the very first story I ever did featured Queen Bee, and I like the symmetry of using her in my come-back issue. And secondly, because this story is the most "straight forward" of the three: JLAer finds menace, contacts the League, they split up to battle the menace, and then come back together to finalize things. This technique would get boring if it is used every issue, but I do like it. And I think it really would be the way most JLA adventures would occur if they were real. Also, there is no guest-star in this issue, which I can't say about the next two. So there is that, too.

First of all, I apologize for all the mistakes. It's typical for the creator to find only mistakes in their own work, but in my case there really are a lot of them to overlook. Like I said before, I'm a story-teller and not an artist. So the art could be better; I know. You'll have to take my word for it, but in the issue I'm working on right now I think I *have* slowed down a bit and that I'm getting better. We'll see if you agree. I just finished coloring number 34 and I never want to find that many mistakes ever again!

Speaking of mistakes, did you happen to see the first mistake I made here? It's on the cover and title page....! I wrote the story as "Drones of the Queen Bee" but then when I went to draw the cover, for some reason I lettered, "Return of the Queen Bee!" in the upper right corner. It was too late to change all the chapter titles, and I had already colored the cover, so...it stayed. Oops!  I know that titles on covers sometimes don't match the actual titles inside, but I'll try not to make that mistake again, haha!

From when I was a kid I was a sucker for the "meanwhile" type scenes shown here, where we get to see what the various members are doing when they get the emergency call. And to help show everybody exactly who "my" JLA is, I included it here. Hope you got a kick out of cameos by Mera and Alfred. By the way, in my universe Black Canary dyes her hair blond; she wears a dark wig as Dinah Lance, not the other way around. I think this makes more sense, don't you? Also by the way, in my universe Kathy Sutton, the girlfriend of Red Tornado, was introduced as an African-American. I had no idea that I was starting a trend of changing the ethnicity of supporting characters when I did it, though! 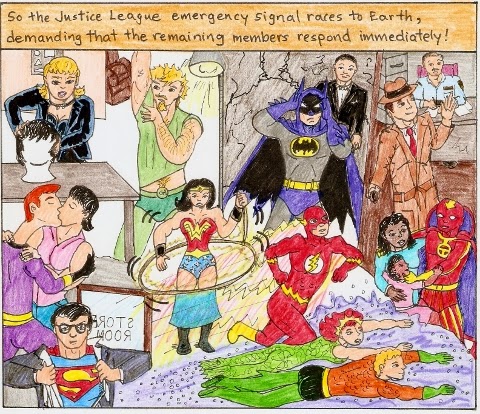 As I said, Queen Bee as a character appeared in my very first issue, back in 1991. However, it was done so badly that I have never scanned it and uploaded it here. So no one here has read it. To explain just who she is in "my" universe I relied on Red Tornado and his accurate memory chip. Thanks, Red. 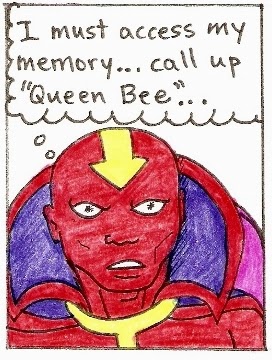 Speaking of Red Tornado, in an age of international communication I thought it made perfect sense to have Red be able to communicate with or in all the world's languages. I don't know *why* it occurred to me, but as soon as it did I liked it and kept it in. And I liked how he assumes it is not a big deal, although Wonder Woman thought it was. Red is always going to be the "ah, shucks" type of hero who doesn't even realize he is doing something wonderful.

Although I have to say I changed the blue in his cape so that next time it won't scan in to look so purple next time! 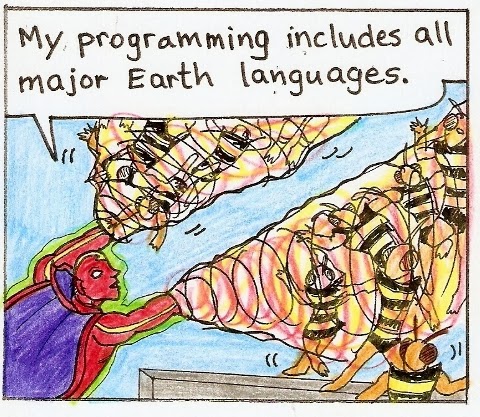 One of the many things I liked about the Steve Englehart run on JUSTICE LEAGUE in the late Seventies was his take on The Flash. Instead of being this world-weary cynic (like Green Arrow) I agree that he should be a guy who still sees the wonder in what he does. In that regard he and Elongated Man are similar, I think. Ralph shows his enthusiasm openly, but Barry doesn't. That's the big difference. And although Barry is friends with Green Lantern, a cosmic police-man, he never gets used to it. The Flash is a Mid-western boy at heart, and I like that about him. 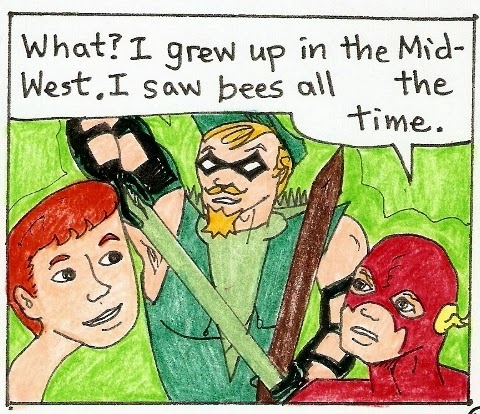 And lastly, just one word about my favorite member, Aquaman. I know he doesn't fit into every single story, but, really, nobody does, right? I think it's silly for comic-book writers to complain that Aquaman is "difficult to write" when he really isn't. Aquaman is probably fourth in terms of sheer strength (behind Superman, Wonder Woman, and Martian Manhunter); he's faster than most of them, and he's used to being a leader and tactician. So although he won't be in every issue, if he's around he's going to be doing stuff. 'Nuff said!? 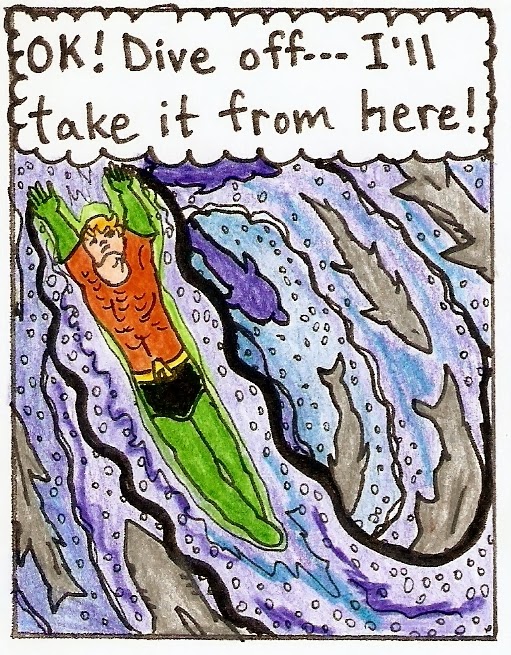 See you in another month with another brand-new adventure!
NEXT ADVENTURE ON-SITE THE WEEK OF MARCH 10
Posted by Russell at 7:00 AM