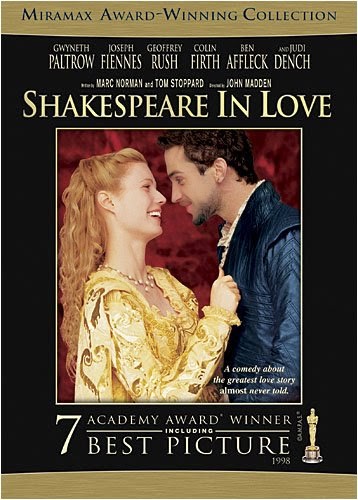 Full disclosure: Shakespeare In Love is one of my favorite films. Not only am I a huge Shakespeare fan, I am also a big fan of "behind the scenes" type movies (Singing In The Rain, Gods and Monsters, etc). So this film is right up my alley. And it does not hurt that one of the supporting characters is named Richard Burbage. I never took the time and money to verify it, but my family believes we are distantly related to Shakespeare's contemporary, and I am not going to argue it. 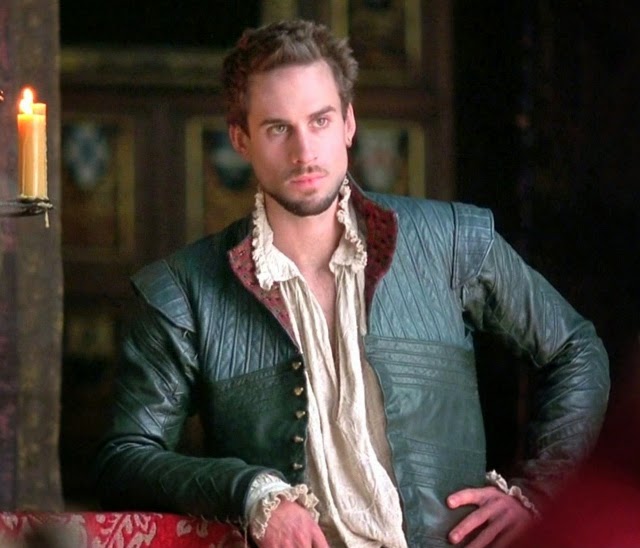 We are in London in 1593, and the two most famous theatres are closed due to the plague. The Curtain Theatre is run by Richard Burbage, and The Rose is run by Philip Hemslowe. Both employ playwright and actor William Shakespeare, who is unfortunately facing writer's block. He is trying to find his muse as he tries to write a comedy about pirates. Meanwhile, Viola is a lady of court, enchanted by Shakespeare's plays. She wants poetry, and adventure, and love in her life. Unfortunately for her, her parents are arranging that she marry Lord Wessex, who has quite a high social position but no money. 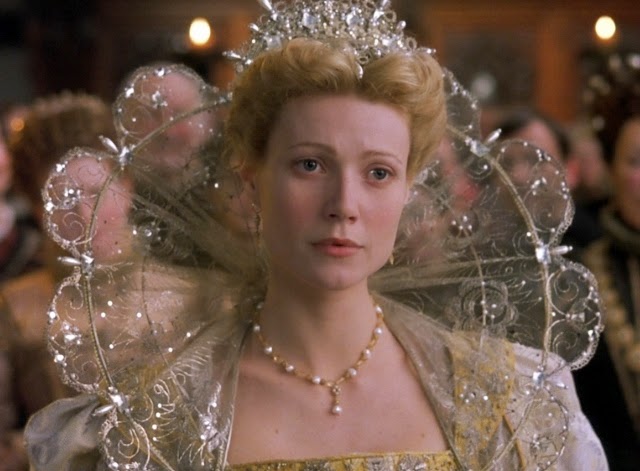 When the theatres are re-opened The Rose holds auditions for Shakespeare's newest play, Romeo and Ethel. He is writing it as they begin to rehearse. Viola auditions, made up as "Thomas Kent," winning the part of Romeo. Shakespeare follows "him" to her estate and meets her, falling in love with her. During their romance, they enact a balcony scene that he adds to the play. After several meetings he realizes that "he" is she, and they sleep together. Along the way, "Ethel" becomes "Juliet." There is a great montage of scenes of "Kent" as Romeo as she and Shakespeare rehearse as they fall deeper in love. The play becomes a romance, but as Viola's forced wedding to Wessex continues to approach, Shakespeare begins to turn the play into a tragedy.  All of the actors in Romeo & Juliet begin to realize just how good it is. They know that the play is turning into one of Shakespeare's best. 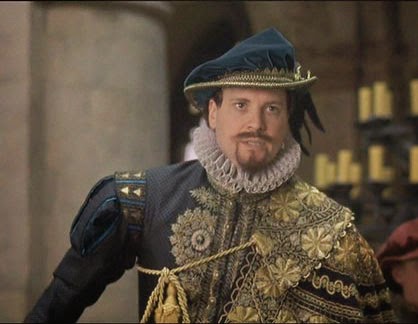 Meanwhile, in the "real" world, Wessex escorts Viola to an audience with Queen Elizabeth so she can approve of the wedding. Viola, not realizing what she is doing, disagrees with the Queen about whether Art can ever truthfully portray Love. They make a wager of 50 pounds, Wessex against Viola. The Queen is pleased with Viola, giving Wessex her blessing to marry her, but telling him that she can tell that Viola is no longer a virgin. Wessex is furious, guessing that Shakespeare (who he thinks is Christopher Marlowe) has slept with his fiancee. When the real Marlowe is killed, Shakespeare thinks that Wessex has killed him. Wessex, for his part, is freaked out because the man he thought was Marlowe is alive and walking around. And Violat thinks that Shakespeare is dead, so when she learns that he is not, they make love again. However, she has learned that Shakespeare has a wife and children, so they know their romance is over. 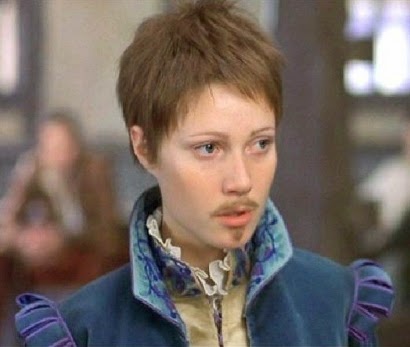 Later, Wessex comes to The Rose and there is a sword fight between him and Shakespeare. At the climax of the fight, however, "Thomas Kent" is unmasked as Viola, and the Minister of Revelry (the man in charge of running theatres in London) closes The Rose for public indecency (women were not allowed to act at this time). Everyone thinks that the play will never be presented. 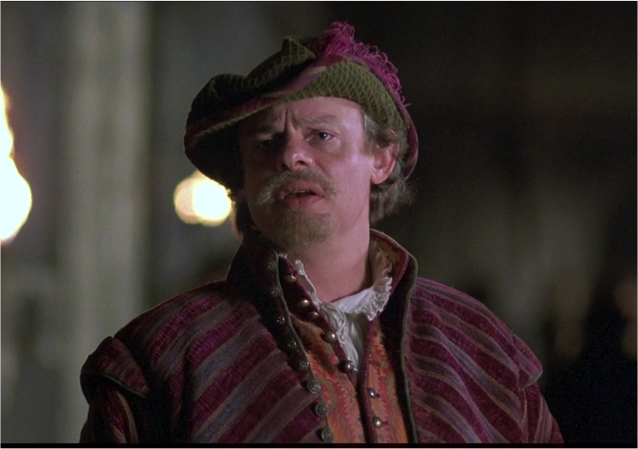 Enter Richard Burbage, who has heard that Romeo & Juliet is a fantastic show. He offers the loan of his theatre, The Curtain, to Hemslowe's troupe. On the day the play opens, Viola marries Lord Wessex. As soon as the ceremony ends Viola hears of the play's opening, and she sneaks off to watch it. Wessex guesses her destination, and follows her. Romeo & Juliet is a full house, but the teenage boy playing "Juliet" has hit puberty, and his voice is cracking. Viola overhears Hemslowe complaining that they have no Juliet, so she volunteers to play her. Hemslowe agrees, even though it is against the law. 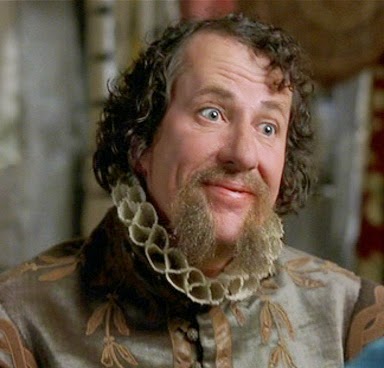 Therefore, William Shakespeare and Viola re-enact their romance as Romeo & Juliet, and the audience loves it. The Minister of Revelry closes the show as soon as it ends, but Queen Elizabeth reveals herself to secretly be in the audience. She passes judgment that Viola is actually "Thomas Kent," and the theatre is not closed. The Queen also passes judgment on the wager, telling Lord Wessex that he owes Shakespeare 50 pounds because this play definitely has represented Love. In their last moments together, Viola and Shakespeare begin to talk about a plot for a new play, a comedy, that will eventually become The Twelfth Night. Viola sails away with her new husband, but she is Shakespeare's muse for the rest of his career. 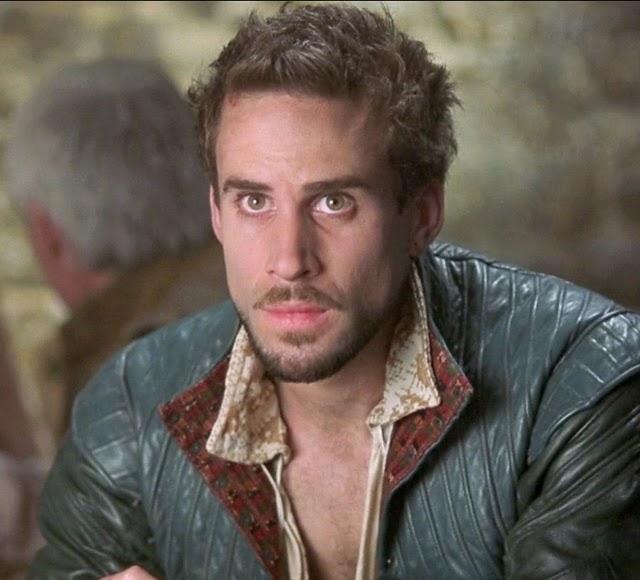 There is so much to enjoy about this movie, I really don't know where to start. The scenery is fantastic. The costumes and "look" of the film really make you believe that you are back in time. The constructed sets of the two theatres, the royal chambers, the inn, the castle, and the gardens....Obviously there were real locales in and around London, but everything is so well done that I could not tell what was real and what was created (or re-created). For example, take a look at the photo below of the theatre. Also, for fans of Shakespeare there are several incidents where lines of dialogue are from Shakespeare's plays....for example, a puritan smiting the terrible business of show is heard to proclaim, "A plague on both your houses!" This is of course, a line that finds it's way into Romeo & Juliet. The balcony scene between Shakespeare and Viola is also adorable, and finds its way (obviously) into the play. 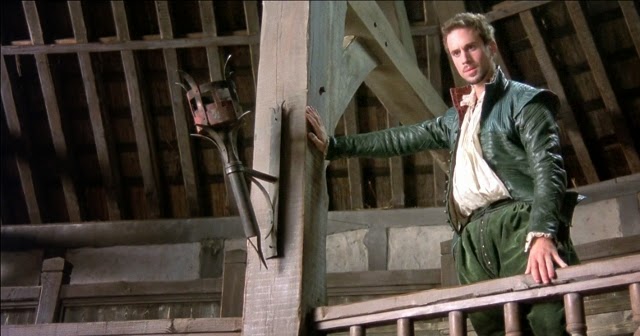 The direction is just as good as the script. For the scene where Shakespeare meets "Thomas Kent" for the first time, it is filmed from the point of view of Shakespeare in the theatre's balcony looking down on the stage, and from Viola looking up to him on the second floor. It's a wonderful clever staging. Likewise, the sword fight between Wessex and Shakespeare is terribly exciting, especially as the actors are in the midst of play-acting the duel scene from Romeo & Juliet just as Wessex bursts in, deadly serious. 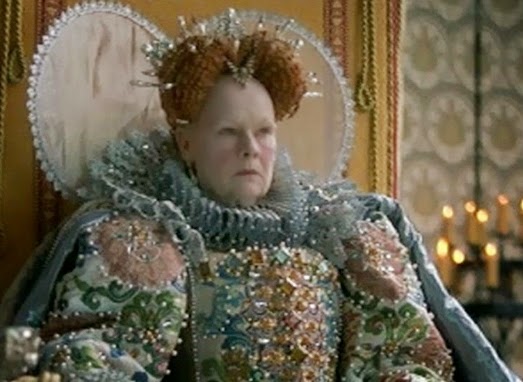 The cast is uniformly wonderful. Joseph Fiennes is a roguish, handsome Shakespeare. Gwyneth Paltrow is a strong yet beautiful Viola. For her role she won Best Actress, and she definitely had a strong presence on screen. I don't think anyone would believe her as "Thomas Kent," though. Tom Wilkinson is fantastic as the man with the money; he is against all things having to do with show business until he starts sitting in on the rehearsals and realizes what a great story the play is. Then he becomes the show's biggest fan. Geoffrey Rush is funny as the owner of The Rose, who never has any money but who is always optimistic. He only knows that things always DO end up fine; the "how" part is a mystery. Colin Firth is sufficiently evil as the strapped-for-cash Wessex who is unhappy with an independent wife. Judi Dench is simply awesome as Queen Elizabeth. She won Best Supporting Actress for her role, which lasted for less than ten minutes. And I can't end this review without saying that without Martin Clunes as Richard Burbage, the show never would have gone on at all.
Besides Best Picture and Best Actresses, Shakespeare In Love won Best Original Screenplay, Best Art Direction, Best Costume Design, and Best Musical Score. It did not win Best Supporting Actor for Geoffrey Rush or Best Director for John Madden, which was won by Steven Spielberg. There is a lot of talk that Shakespeare In Love should not have beaten Saving Private Ryan as Best Picture, and I'll get to that in a minute. But if you love light comedy, high tragedy, great historical drama, and British scenery, I can almost guarantee that you will enjoy Shakespeare In Love. It is an adult comedy drama that looks and sounds marvelous. Measure for measure, it's a gem.

This trailer gives you a few scenes that represent the "fun" of the production.


Also Nominated:
(in alphabetical order)
Elizabeth
Life Is Beautiful
Saving Private Ryan
The Thin Red Line
This is another of the rare years when the Best Director and Best Picture were not for the same film. As mentioned above, Steven Spielberg won Best Director for Saving Private Ryan, although the Best Picture prize eluded him. No one can be sure, but I think that he probably won Best Director for the D-Day Invasion scene that starts that film; after that, the movie is just another "search" film that I don't remember as being all that exciting. Coincidentally, Elizabeth tells the story of Queen Elizabeth, who as a character also appeared in Shakespeare in Love. The Academy awarded this Queen, but not that one, although Cate Blanchett was nominated for the title role. The Thin Red Line is another epic WWII film that I am sure I saw but I don't remember. And Life Is Beautiful is the real oddity here: it is an Italian film about an Italian Jew at a concentration camp, trying to keep his young son ignorant of what is going on around him. Roberto Benigni co-wrote and directed and starred in the film, which won Best Foreign Film. He also won Best Actor for his role, beating out such luminaries as Tom Hanks, Ian McKellan (in the under-rated Gods and Monsters), Edward Norton, and Nick Nolte. I only saw this film recently, and his performance *was* unforgettable.
Posted by Russell at 6:00 AM