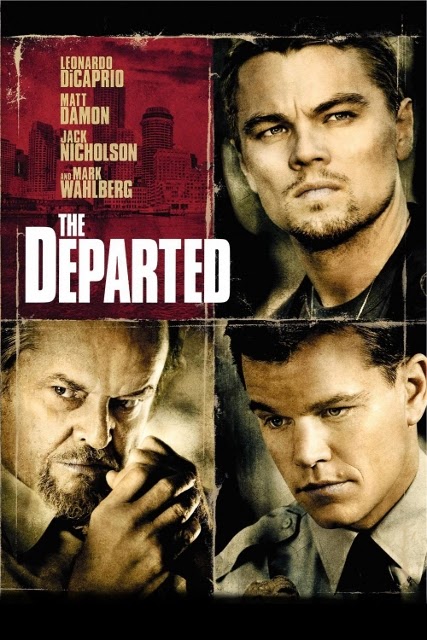 The Departed is a violent, brash, and complicated film. It stars Jack Nicholson as a gangster in Boston and Matt Damon and Leonardo DiCaprio as the police officers who are either trying to catch him, or to keep him free. The theme of the film is "identity," as everyone plays a different character depending on the audience. And it is the film that finally won director Martin Scorcese his first Academy Award for Best Director. The film begins in the past, with scenes of riots with a voice over from Nicholson. Then we see Jack, in the shadows, spinning his spidery web around the people of his Boston neighborhood. Then we see young, fresh-faced Matt Damon and tough, determined Leonardo DiCaprio in the police academy. They never meet, and in fact their lives are on parallel tracks. Damon is a mole for Nicholson, an informer and a bad cop through and through. DiCaprio, on the other hand, grew up badly treated and determined to make something of himself, but is recruited to be an informer in Nicholson's gang. So here we have the crux of the film: the good guy is pretending to be bad, and the bad guy is pretending to be good. Got it? Although we never know whether we can trust anybody else in the story, we know that these two are diametrically opposed to each other. 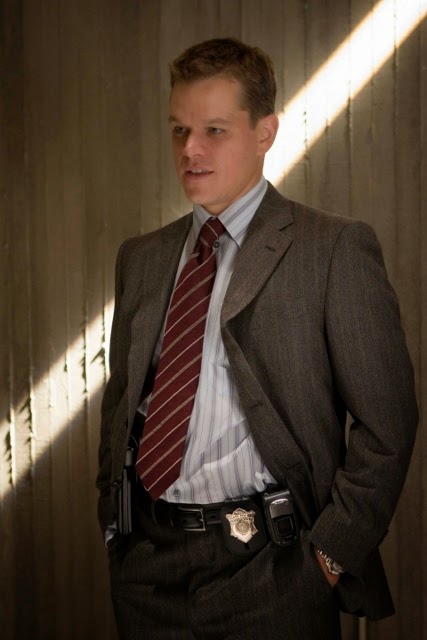 I don't want to give away too much of the story, but what I have written so far is only about the first half hour or so of the movie. Besides the latent drama of this situation, things really start to get tense when both the cops and the crooks realize that there is a "rat" in each other's organization. Then the situation is literally a cat and mouse game, as Dillon and DiCaprio battle to "out" the other without giving his own identity away. There are many, many tense scenes as each tries to act or re-act in ways to protect themselves. 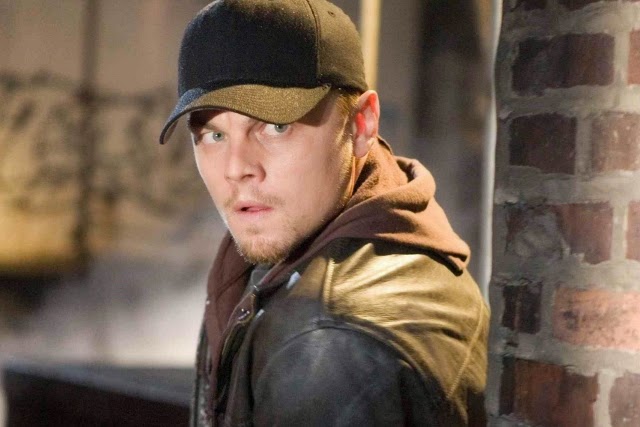 The cast is uniformly excellent. Jack Nicholson is absolutely believable as a gangster who could literally murder you, cut your hand off, and pull your wedding ring off to send to your widow. Matt Damon plays against type as the Boy Next Door who is willing to blow your brains out if he's cornered. And Leonardo DiCaprio gives one of his best performance ever as Billy, a man determined to do what is right but who is slowly killing himself with the stress of his charade. His scenes with his psychiatrist friend, who just so happens to be Damon's fiancee, are pitch perfect. It is a shame that DiCaprio was not nominated for Best Actor for this role. He was nominated instead for the film Blood Diamond, but lost to Forest Whitaker in The Last King of Scotland. The supporting cast is also great, especially the under-rated Martin Sheen as DiCaprio's boss in Special Unit. He is always calm, but he is also steely and determined. It is an unassuming role, but an unforgettable one. 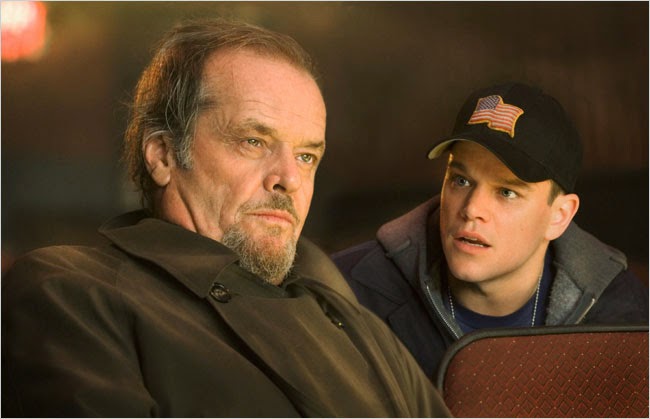 Director Martin Scorcese does an excellent job in guiding the complicated story. There are scenes bouncing back and forth between Damon and DiCaprio at the beginning, setting up the parallelisms (Leo goes to jail to create street cred, Damon rises in the ranks by solving crimes via tips from Jack). Then when DiCaprio follows an envelope from his gang to Nicholson to the police rat, there is a moment when he *almost* uncovere Damon....it's a terrifically filmed and edited encounter. Likewise, when Nicholson is "interviewing" DiCaprio to try to figure out if he is the informer, the two actors are filmed in extreme close-up, ratcheting up the tension and the paranoia.  Lastly, there is a scene where Damon comes across the cell-phone that has been used to call "the informer." He picks it up and calls it. DiCaprio, weary, knows that something is up. He answers, but doesn't speak. For uncountable seconds both actors stand there, holding the phones to their ears. The tension is so thick you could cut it with a knife. 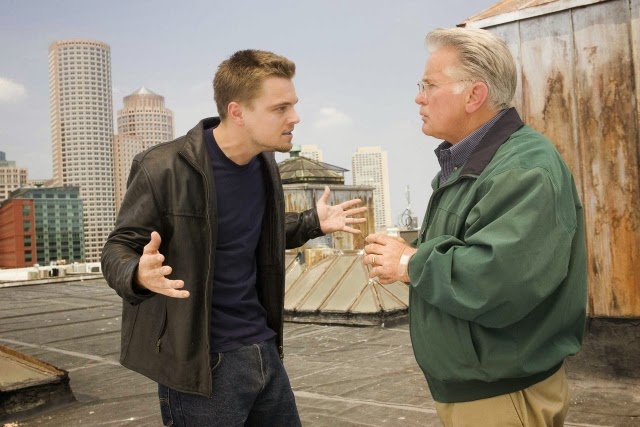 The Departed is based on a Hong Kong film called Infernal Affairs in English. (That might be why there is a Chinese gang in the middle of the action.) Screenwriter William Monahan took the basic story and transferred it to Boston, winning an Academy Award for Best Adapted Screenplay. Besides winning Best Picture, Best Director, Best Editing, and Best Screenplay, the film was nominated for Best Supporting Actor for Mark Wahlberg. He played a Special Units cop determined to clean his city up no matter what the cost. (He lost to Alan Arkin in Little Miss Sunshine.) 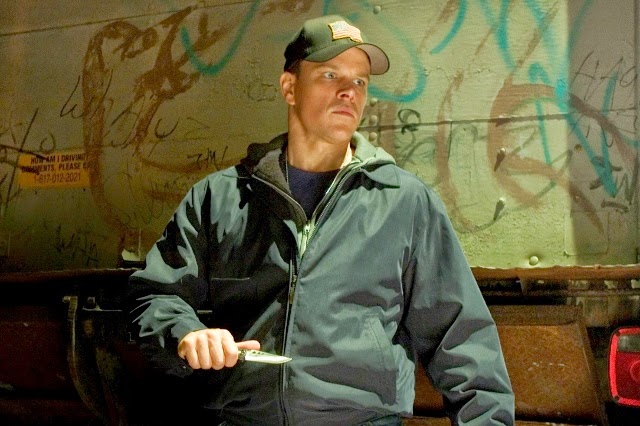 If violence and curse words disturb you when they are too numerous to count, you might want to steer clear of this film. However, if you like rough and tough police drama, The Departed will not disappoint. Consider yourself warned, though: you can not have this film on in the background as you are doing something else. It demands your undivided attention.

This is a great trailer. It really gives you a feeling of the film: the edits, the
tension, the drama, the scene set-ups. Nicely done, Warner Bros!


Also Nominated:
(in alphabetical order)
Babel
Letters From Iwo Jima
Little Miss Sunshine
The Queen
Babel struck me as being derivative to the multiple story-lined Crash, so I never saw it. Japanese actress Rinko Kikuchi was nominated for Best Supporting Actress for her role in it, but she lost to Jennifer Hudson in Dreamgirls (which was not nominated for Best Picture). Letters From Iwo Jima was the Clint Eastwood directed film about the battle for Iwo Jima as seen from the Japanese side. It's a marvelous film, I heartily recommend it. Little Miss Sunshine is a quirky independent film about a quirky young girl from a quirky family who wants to enter a junior beauty pageant. And The Queen is the story of Queen Elizabeth and UK Prime Minister Tony Blair reacting to the death of Princess Diana. Helen Mirren won Best Actress for the titular role.
Posted by Russell at 6:00 AM