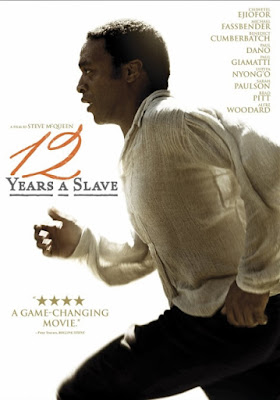 Twelve Years a Slave is the most difficult Best Picture to watch of all of them. It tells the story of a New York musician named Solomon Northup who was kidnapped from Washington, DC and sold into slavery in 1841. For twelve years he held out hope that he would somehow escape or get rescued. During that time he was beaten, shamed, threatened with death, whipped, and nearly lynched. So although I absolutely recommend that all Americans see this film, it is absolutely a difficult film to sit through. 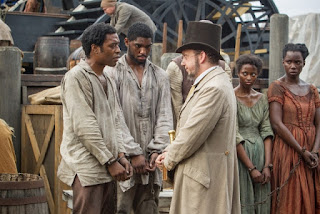 The facts of the story are these: In 1841, Solomon is invited to Washington, DC to play at a travelling circus. While he is there he is kidnapped; he finds himself in a slave house with no memory of how he got there. He is identified as a runaway slave from Georgia, and treated as such. He is shipped off to the South, where he is eventually identified as "Platt," and sold to Mr. Ford. When Solomon impresses his master by fording a riverway where the white land's keeper could not, he sets himself up for a beating. When Solomon actually fights back, the keeper tries to lynch him. Solomon is saved by the overseer, who does not take kindly to the keeper killing Mr. Ford's property. He lets Solomon dangle an inch from the ground for several hours, until Mr. Ford returns home. Ford then sells "Platt" rather than listen to his pleas to let him go. 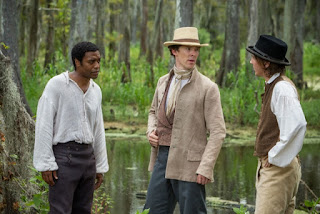 Solomon is sold to Epps, an insanely jealous master. He has the cotton pickers who come in with the lowest amount of cotton whipped. Solomon, not having grown up and knowing how to pick cotton, gets whipped nearly every day. Epps' eye is caught by Patsey, who tries to stay out of Epps' way by picking a large amount of cotton. Unfortunately, he notices her and rapes her and otherwise terrorizes her, much to his wife's disgust. She blames Patsey for whoring on her husband, and she blames him for being weak. She harasses Patsey, too, throwing things at her and scratching her face. Solomon tries to stay out of their way, but he notices things, and they notice him noticing things, which makes him a target, too. Epps' wife is always sending Solomon to town to get things for her at the store. He thinks she suspects that he is educated. He eventually steals a piece of paper, hoping to write a letter for help.

When an indentured servant, a white man named Armsby joins their ranks, Solomon decides to trust him. He asks Armsby to deliver the letter for him. Armsby, unfortunately, betrays Solomon's trust by talking to Epps. Solomon has to think fast when Epps corners him and wants to kill him. Then, in one of the saddest scenes of the film, Solomon burns his letter. He had spent so much time collecting ink and took so much risk to steal the paper, and in the end he lights the parchment on fire and watches it as it turns into absolute blackness. 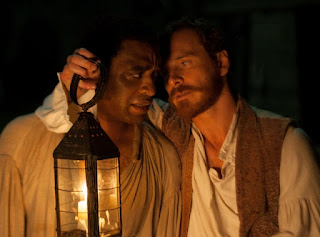 Degradations continue for several more years. Patsey begs Solomon to kill her because she is too weak to kill herself. When Patsey goes to another neighboring plantation to wash because Epps' wife refuses to give her soap, Epps explodes in a fury. Her orders Solomon to whip Patsey. When Solomon refuses, Epps threatens to kill all the other slaves unless he does. Solomon has no choice. In the most disturbing scene of the film, Solomon whips Patsey while she screams in pain. Then Epps takes over, and in an orgy of violence he screams, "You did this to yourself, Pats!"

At this point, Solomon gives up any chance of returning to freedom. He smashes his prized violin, overwhelmed with grief for himself and his fellow slaves.

However, soon after this a free-lance carpenter named Bass arrives to help build a gazebo for Epps. The two white men argue about slavery, as Bass is from Canada and does not approve of slavery. Solomon overhears him, and reluctantly trusts another white man. Solomon tells Bass his whole story, and Bass agrees to help him.

Several months later, a sheriff arrives at the Epps' plantation with one of Solomon's old New York City friends. They take him away, even as Epps is screaming at them. At last, Solomon returns to his family, apologizing for the pain he caused them. 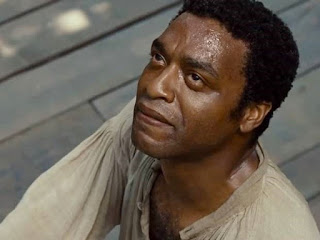 Chiwetel Ejiofor is fantastic as Solomon. Over the course of the two-hour film you watch him slowly degrade from a proud, educated gentleman into a scared, frustrated slave. It is a fabulous performance. His best scene is when he is confronted by Epps regarding Armsby delivering a letter for him: his expression goes from cornered animal to meek incompetent to indignant laborer to angry, loyal boy, all in the space of a few moments. And of course, throughout the film you can watch the pain on his face as he is enslaved, then sold, then betrayed, then asked to commit murder, then forced to hurt Patsey. At the very end, when he finally rejoins his family, his face is still sad for all that he has missed. It is truly a tear-jerking finale. Shockingly, Chiwetel Ejiofor did not win Best Actor for his work in this film. He lost to Matthew McConaughey in Dallas Buyers' Club.

Michael Fassbender as the crazed Edwin Epps is like a rattle-snake; you don't want to watch him, but you must. Every time he is on screen you are afraid that something bad will happen. He and Benedict Cumberbatch as Ford are strangely similar in their opinion on how to bring their slaves to religion. Both insist on their slaves going to "church" on Sundays, as they both read from The Bible passages to keep them enslaved. Fassbender was nominated for Best Supporting Actor for his role, but he lost to Jared Leto in Dallas Buyers' Club. 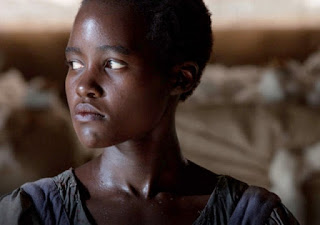 Lupita Nyong'o won Best Supporting Actress for her role as Patsey. She hides her contempt and anger from Epps, but lets it out with Solomon and the other slaves. Nyong'o has several strong scenes, such as when she begs Solomon to kill her, or when she is whipped by Epps but still defiant. When Solomon is freed, his one regret is having to leave Patsey behind with Epps. 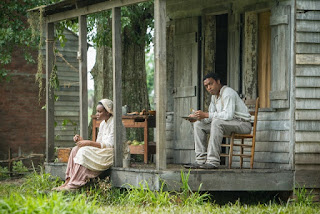 There are plenty of great scenes in this film. One of the first that made me sit up and take notice was the extreme close-up of the paddle-wheel of the ship taking Solomon into slavery. Director Steve McQueen lingers on the wheel, then "flows" with it as it moves and goes back into the river. We leave the scene lingering on the broken surface of the river, as the ship moves on and Solomon moves on to his destiny. As mentioned earlier, the letter being burned, with the camera lingering on the ashes as the last bit of light/flame/hope goes out, is also masterfully done. Towards the end of the film there is a funeral. The scene is expertly staged, with the blue of the sky, the green of the forest and grass, the dirty white clothes, and the dark skin of the slaves all coming together to create a beautiful tableau. Steve McQueen was nominated for Best Director, but lost to Alfonso Cuaron for Gravity.

In doing research for this review, I found that there were a few complaints at the time about the "truth" of this true story. Having already come across that concern while reviewing films like Argo (just last week!) and A Beautiful Mind before that, this does not surprise me. However, of the three films, 12 Years A Slave seems to have taken the least liberties with their story. Some incidents may have been moved around a little bit, sure, but the writer did not create brand new scenes that never happened to the lead character. For example, no slaves were killed on the slave ship taking Solomon to the South, but there is a scene like that in the movie. So...if that is the extent of the "lies" of the film, I am okay with that. 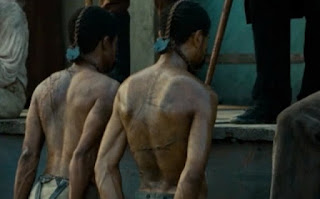 Twelve Years A Slave was nominated for 9 Academy Awards and won three: Best Picture, Best Adapted Screenplay, and Best Supporting Actress. I agree that this is a difficult film to watch, but if you have seen Gone With The Wind and liked that, you must see this film.

Also Nominated:
(in alphabetical order)
American Hustle
Captain Phillips
Dallas Buyers Club
Gravity
Her
Nebraska
Philomena
The Wolf of Wall Street
This is another year when I didn't make the time to see most of these nominees. American Hustle is the film about an FBI hustle in the late Seventies. It was nominated for 10 Academy Awards, but did not win any. Captain Phillips was the piracy film starring Tom Hanks. Dallas Buyers Club stars Matthew McConaughey and Jared Leto as men dealing with the AIDS crisis. My wife and I did see that, and both actors were fantastic in it. Gravity was the nearly one-woman show about Sandra Bullock as an astronaut trapped alone in space. As mentioned above, it won Best Director. Her is the sci-fi love story between Joaquin Phoenix and an artificial intelligence. Nebraska is about an aged Bruce Dern and his adventures on the way to Lincoln, Nebraska. Philomena is the Judi Dench drama about giving up a child for adoption. And The Wolf of Wall Street was Martin Scorceses' drama starring Leonardo DiCaprio.
Posted by Russell at 6:00 AM