BLB: The Man From UNCLE 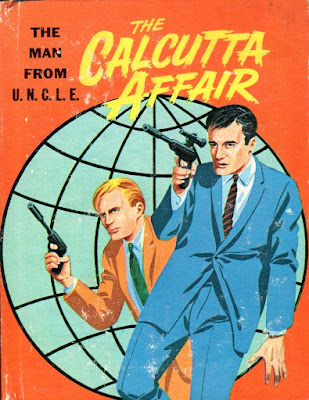 This time, I want to talk about The Man From U.N.C.L.E. in The Calcutta Affair, written by George S. Elrick and published in 1967. It is number 11 in the 1967 Big Little Book series. This is clever, as all UNCLE fans know that secret agent Napoleon Solo wore UNCLE badge number 11.

Big Little Books were a series of story-books published by Whitman Publishers from the 1920s thru the 1980s. The books I have are 250 pages but very compact, only 10 cm x 13 cm x 2 cm (approx 4 inches x 5 3/4 inches x 1 inch). There is text on one side and an illustration on the other. Although the writers were always credited, the artist never was. From 1967 thru the early 1970s such TV luminaries as Lassie, Flipper, the Lone Ranger, Bonanza, Shazzan, Space Ghost, Frankenstein JR, Tarzan, and, yes, Aquaman, were featured. Eventually the TV series' stars fell by the way-side and were replaced with returning, perennial favorites like Mickey Mouse, Bugs Bunny, and Woody Woodpecker.

The Calcutta Affair begins with our heroes already in Calcutta. UNCLE agent Napoleon Solo is in a local hotel, waiting for his contact to communicate with him. A mouse appears in his room acting weirdly, so Solo shoots it dead. Solo reviews the situation for himself, but also for us: the local UNCLE agent has suddenly developed bubonic plague. When another UNCLE agent sent to check on the first agent disappears, Solo and his team-mate, Ilya Kuryakin, are sent to investigate. 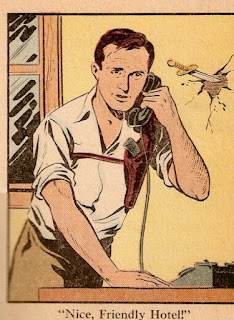 Suddenly, there is a knock on his door and Solo's mind returns to the present. He opens the door and is attacked by a THRUSH agent. He wakes up unharmed but confused. He calls Ilya, who is busy in his own hotel room searching for listening devices. Ilya comes over and they find an electromagnetic device  in the dead mouse and in the water faucet. They speculate that the initial agent did just what Solo had done: when he turned on the water in the bathroom, the flea-infested mouse was stimulated to attack. However, they guess that the first agent wasn't fast enough with his gun to kill the rodent. So from the fleas on the rigged mouse the agent developed the plague. 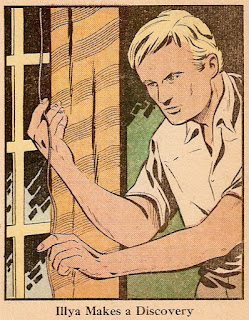 The next day the two agents discuss their plans while speaking in Navajo. Napoleon is going to visit hospitals in the area to investigate the bubonic plague while Ilya will check out the docks to see if he can figure out how THRUSH is managing to come and go unseen.

Napoleon poses as a heart specialists and visits with Dr. Von Sternberg, a British-educated local. Napoleon asks about the agent suffering from the plague, but the doctor denies the possibility of such a case. Instead he offers to show Napoleon another case who turns out to be the other missing agent. Solo is distracted just long enough to be stabbed with a hypodermic needle, then falls unconscious.

In the city, Ilya is travelling around trying to make sure THRUSH agents see him so that they will follow him instead of Napoleon. Solo's would-be assassin from the night before trails him, but when he confronts Ilya the UNCLE agent uses a rigged camera to knock him out. Ilya sees that the THRUSH agent is using a  communication device shaped like a tooth, so he decides to "wear" it himself. He throws the agent into the trunk of his car and drives it back to the hotel. 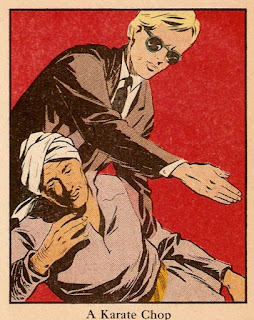 Napoleon wakes up in a room with Dr. Von Sternberg, who offers him tea. As they talk, the doctor tells Napoleon that his fellow agent has died of Leukopenia, poisoned by sand flies. Solo feels sick himself, suddenly realizing that he, too, has been poisoned. As he fights off nausea and a desire for sleep, Napoleon has no choice but to listen as Von Sternberg explains his plan. THRUSH will release radio-controlled mice covered with bubonic-plague infested fleas in order to spread the dreaded disease. He shows Napoleon the freeze-dried animals, but then Solo passes out. 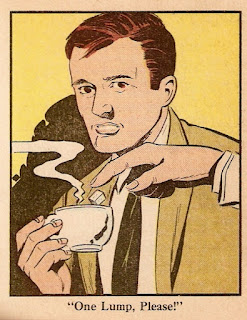 Meanwhile, Ilya has returned to the hotel with the THRUSH agent still in the trunk of his own car. Through the "tooth" transmitter Ilya learns that another agent is on his way to meet up with "him." Ilya pretends to be the THRUSH agent, learning that the reason they can travel without UNCLE seeing them is because they are using a submarine. After the second agent shows Ilya the bombs in their suit-cases, Ilya turns on him. Ilya captures him and threatens him unless he leads him to the submarine dock. 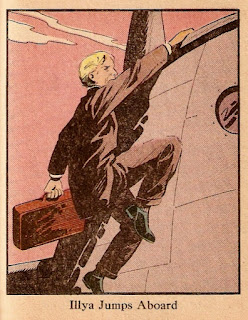 Ilya manages to sneak aboard the submarine, where he finds the freeze-dried mice and fleas. He plants a 9-minute timed detonation bomb, then runs into Dr. Von Sternberg. They tussle, and eventually Ilya is able to free Napoleon, inject with the antidote he needs, and get them both off of the submarine before it explodes. 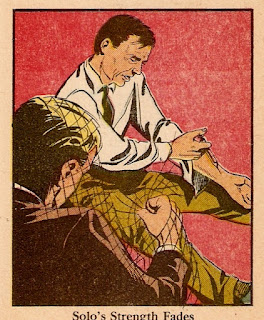 Commentary:
When I was a kid my father would read bed-time stories to my brother and I. I loved these Big Little Books because I could listen to the story while also enjoying the illustrations. However, The Man From UNCLE first aired between 1964-1968. I was only four years old when it went off the air. Clearly, this book was bought more for my brother than for me....or perhaps for my father, so he could atleast somewhat enjoy the stories he had to read to us.

By the time I was reading this story or it was being read to me The Man From UNCLE was no longer on the air, and it was never in syndication in St. Louis in the Seventies. So this picture-book was the only exposure to Napoleon & Ilya that I had for many, many years. When I finally had the opportunity to watch the TV-series, I compared it somewhat to this story.

First of all, there is no Mr. Waverly in this story. Not only does he not appear, he doesn't even get a mention. The action starts immediately in Calcutta, with no set-up or opening of channel D.

Also, there are no guest-stars. The TV series' hook was to involve innocent bystanders in the action, but there are no superfluous characters in *this* story. That includes any beautiful women for Napoleon to flirt or sleep with.

Other than those differences, this story reads like a genuine UNCLE adventure, or perhaps I mean as a straight-forward spy thriller. A plot to spread bubonic plague via frozen fleas!?! Fantastic. And the heroes are able to figure out the plot in a logical, methodical way. The story doesn't feel like there are any "fill-ins" for time or page constraints. Maybe that's just me, but it seems well plotted. And although no one is shot or killed out-right, Ilya is responsible for at least three deaths, and the men have to work with hypodermics to cure a fatal disease. Pretty serious stuff.

Clearly the writer and editor(s) knew that Ilya Kuryakin (as portrayed by David McCallum) was just as popular as Napoleon Solo (Robert Vaughn). Ilya gets most of the action scenes and saves the day. Of course, on the TV series he was always wearing black. The colorist of this story-book got that point wrong. Ditto Napoleon's dark black hair, colored here brown.

The un-credited artist gets the actors' features basically correct. In fact, as an adult re-reading this I noticed a few times where publicity scenes of the actors were clearly used as character models.

The story is simple but well told, with a surprising amount of tension and drama for a children's book. If you're a fan of Sixties pop culture in general or The Man From UNCLE in particular I recommend you hunting this book down. You will enjoy it. 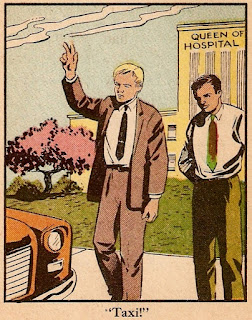