MB6: King of the Gotham Jungle! 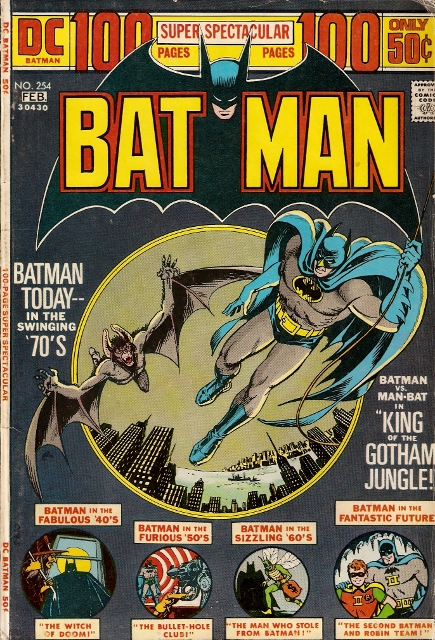 
Synopsis:
Kirk Langstrom is back at the Gotham Natural History Museum listening to the police-band radio as he works. Kirk remembers (for the benefit of new readers) that the original reason he created his bat-serum was to fight crime alongside his idol, Batman. 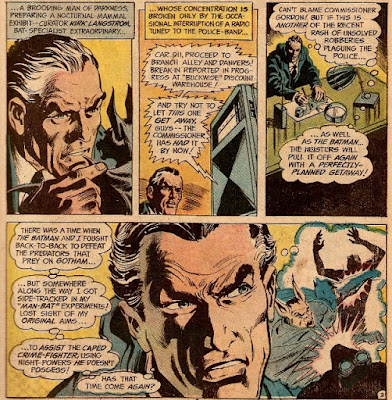 Meanwhile, out in the city there have been a rash of unsolved robberies plaguing the police. Batman thinks he has come across another incident, so he sits tight to watch what happens. He hopes to trail the criminals back to their base to nap all of the gang. However, eager GCPD officers try to catch the escaping thieves, lousing up Batman's plan. Then Batman realizes that the escaping van was only a distraction, and that the gang has escaped through the man-hole the van had been parked over. 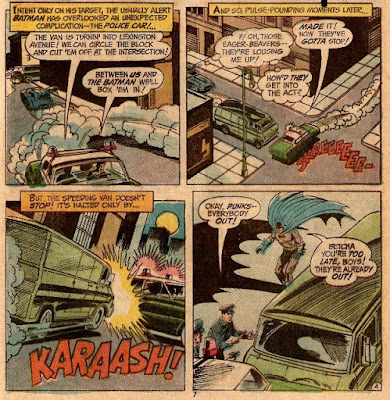 The next night, Batman comes across Ajax Warehouse. He rushes in, sure that he will encounter the gang. However, what he has found is a set-up that the so-called Getaway Genius concocted to keep him and the police busy. Across town, the real gang of thieves has completed another robbery when they are discovered by Man-Bat. 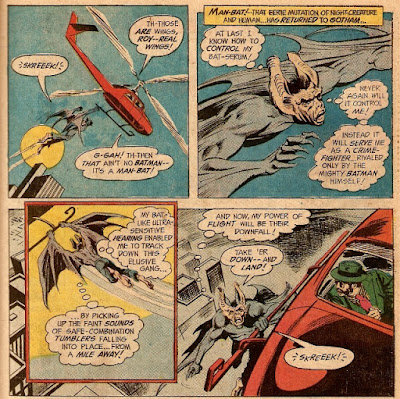 This time, the escape route was via helicopter, but the thieves didn't count on Man-Bat being able to fly after them. He grabs the helicopter, but doesn't have the brute strength to force it down. The thieves are about to shoot the would-be hero when the Getaway Genius stops them; he doesn't want a murder rap if/when he is arrested. 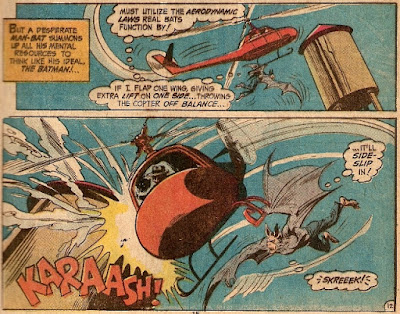 Man-Bat finally manages to maneuver the chopper into a water-tower, downing them by nearly drowning them. Man-Bat stops the gang, and Batman arrives just in time to stop the Getaway Genius himself. He shakes Man-Bat's hand, hoping that they might one day be partners. 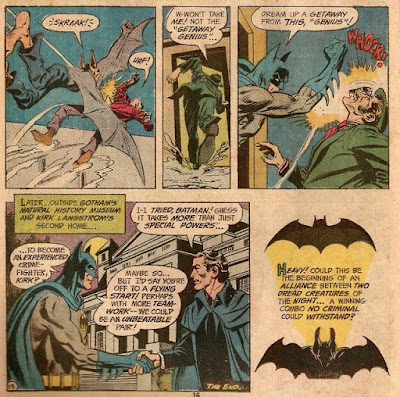 Commentary:
This is the first Man-Bat story that I think just doesn't work. The last time we saw Kirk Langstrom, he and his wife were in Las Vegas trying to cure her of being an actual vampire bat woman. This time, we not only never see her, we don't even hear about her condition. If this was the first time you ever came across Man-Bat, you wouldn't even know he was married, let alone how much drama there has been in his life. He's almost pedestrian here.

And that is a symptom of what is really wrong with this story: for the first time, Man-Bat is NOT the focus of the adventure! WAAAAAY too much time is spent on the Getaway Genius and how he is outwitting Batman. In this 13 page story, we never even see Man-Bat until page 9. That is unacceptable.

It's frustrating to see that Man-Bat creator Frank Robbins is treating him as a story device. We get no characterization, no camaraderie between him and Batman, and, as mentioned earlier, no small talk about Francine. We don't even have the usually super-concerned Batman asking Kirk if he really is OK playing Man-Bat....which was the plot point of, arguably, every previous Man-Bat story up to this one! Instead we get a "great, let's team-up again sometime!" ending tacked on that just feels...weird. It's like DC skipped a story somewhere in-between this one and Detective Comics #429.

As for the art, Nick Cardy draws one ferocious Man-Bat on the cover. Unfortunately, ferocity was never Irv Novick's forte. He is competent, but he was much better at drawing straight-laced characters like Robin, the Flash, and Commissioner Gordon than he ever was at Batman or Man-Bat. Dick Giordano does what he can but Man-Bat looks weak and ugly here instead of weird slash creepy and strong.

Overall not one of Man-Bat's better appearances.

This story has not yet been reprinted.....and probably never will be, unless it's a part of some all-inclusive "Seventies Batman" collection.

SKREEK!!
Man-Bat was created by Frank Robbins and Neal Adams
Posted by Russell at 9:37 AM