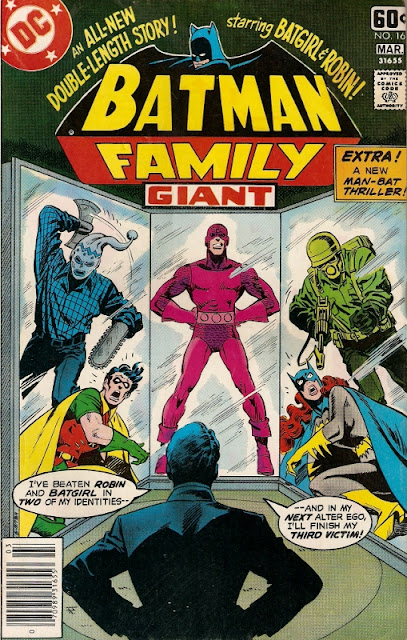 Synopsis:
This issue's story begins immediately after the last panel of last issue, as Jason Bard is fighting off Man-Bat because Man-Bat thinks Jason is the Shotgun Sniper. As they fight, Jason tries to prove that he is a private investigator, but Man-Bat refuses to believe him. 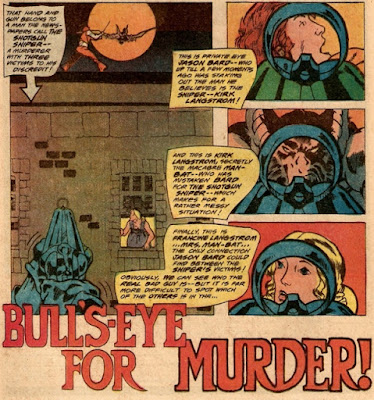 As Man-Bat flies around his own apartment complex, and Francine is at the window of their apartment trying to figure out what is going outside, the actual Shotgun Sniper is targeting one of these three. Man-Bat accidentally gets in the way of the Sniper as he shoots at Francine. Man-Bat dives into their apartment, giving Francine a chance to explain to her husband who Jason is and why he thinks Kirk is the Sniper.

Man-Bat flies out again in time to see the Shotgun Sniper sneak into an all-night diner down the street. He follows. Meanwhile, Jason Bard goes into the diner via the front door intending to call the police, still thinking that Kirk Langstrom is the Sniper. When Man-Bat walks into the back of the diner, Jason sees him and raises an alarm, alerting the real Shotgun Sniper, who fires at them both. The two detectives quickly confer, and Man-Bat agrees to be the decoy as Jason sneaks up on the Sniper and takes him out.

Later, Captain Daniels and the police arrive to arrest the Sniper. He was really a man named Randy Markos, who was at summer camp with Francine and the other victims several years before. They all treated him badly, so Markos went into the Army and when he came out, decided to hunt them down.

When Man-Bat arrives back at the apartment and tries to explain it all to her, Francine doesn't care. She calmly tells her husband that it is time to take her to the hospital for her to have their baby! 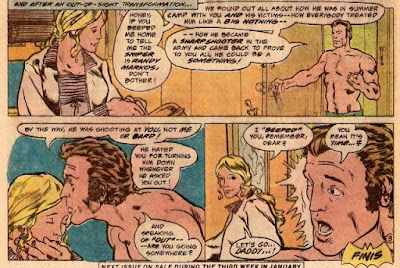 Commentary:
This is one of those back-up stories that could have used another page or two. As it is presented it seems rushed and confined. The battle between Man-Bat and Jason Bard on the roof of the Langstroms' apartment especially could have been "opened up" more. (I can only imagine what fellow tenant Ambrose Robertson thought when he saw/heard their battle! )

And the final scene in the diner did feel closed in and claustrophobic, but it was also hard to tell who was doing what at any given time. That might have been because artist Michael Golden was still new and might not have understood how to choreograph a battle, but I still feel like another page would have helped keep the story flowing better.

And that ending! I remember when I first read this story thinking how cool it was going to be that Man-Bat and Francine were going to join that small minority of super-hero parents. We'll see how that turns out next issue....!

Man-Bat Trivia Notes:
Status:
This story has not been reprinted. Because it is only nine pages, I re-present it to you now in its entirety.
For the sake of nostalgia, I have also included the letters' page from Batman Family #19 which features commentary on this story. 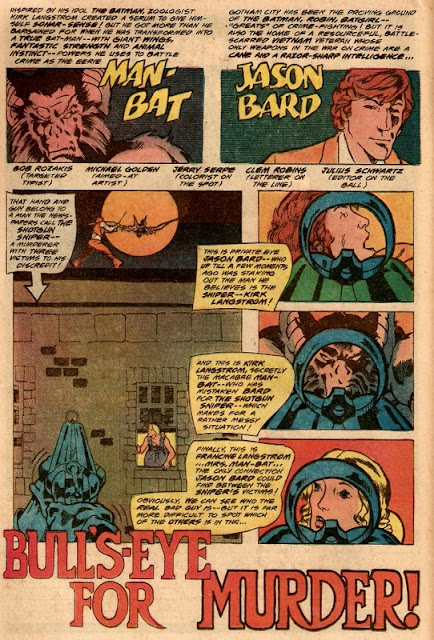 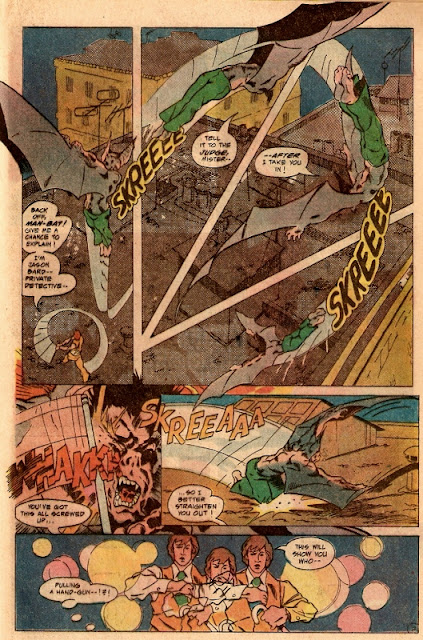 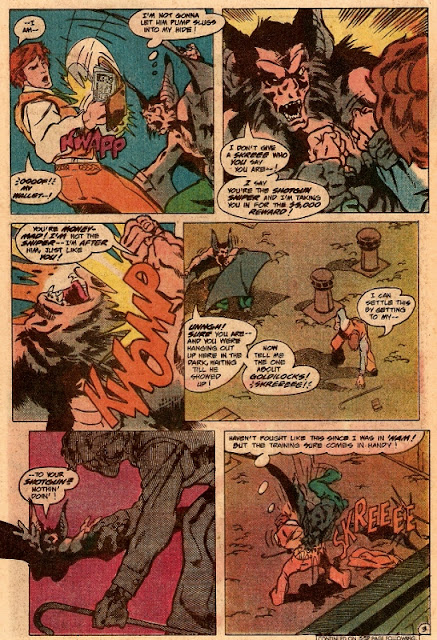 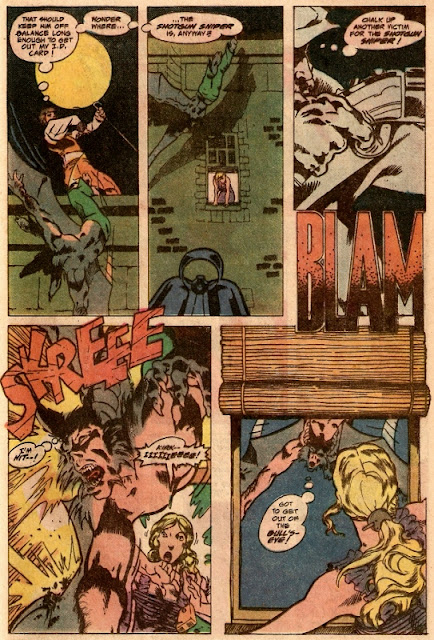 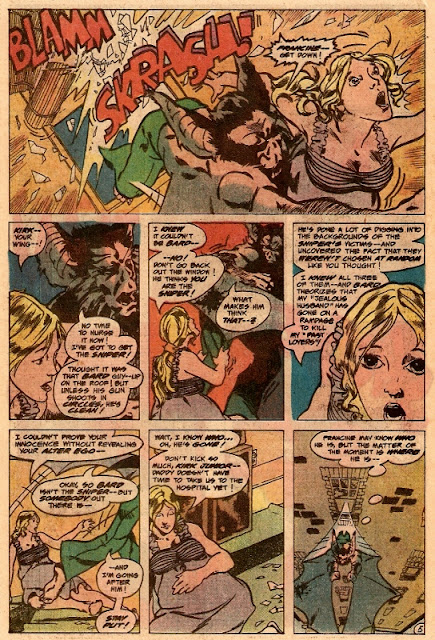 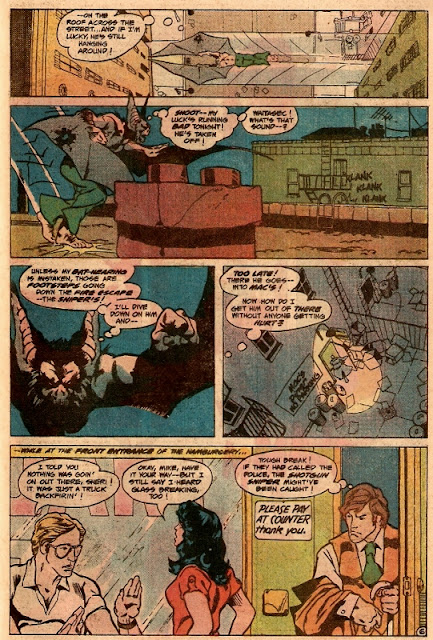 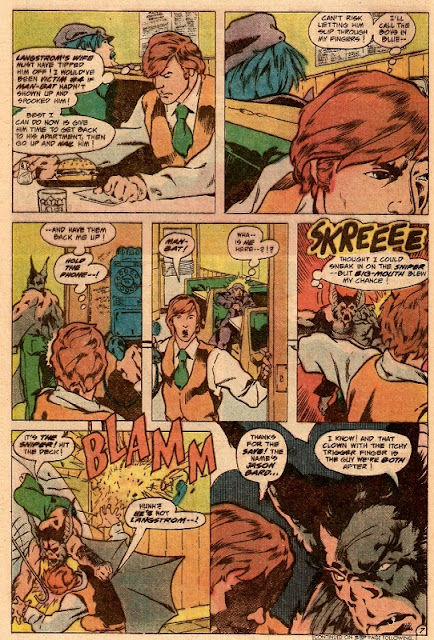 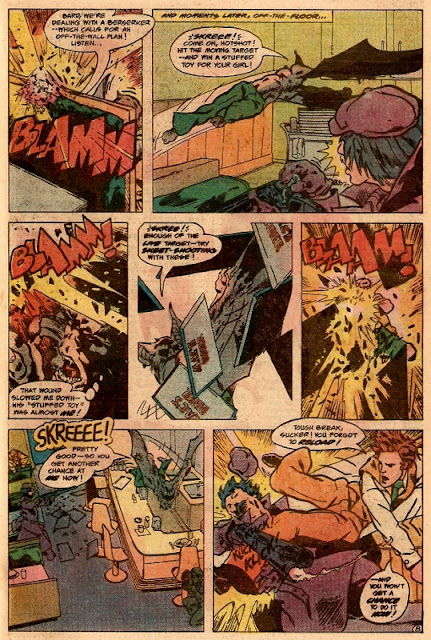 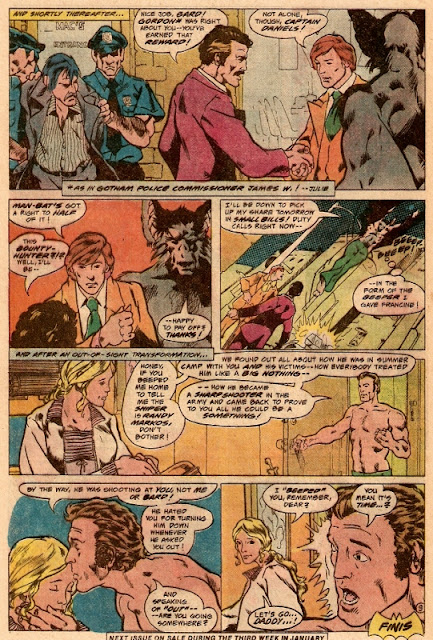 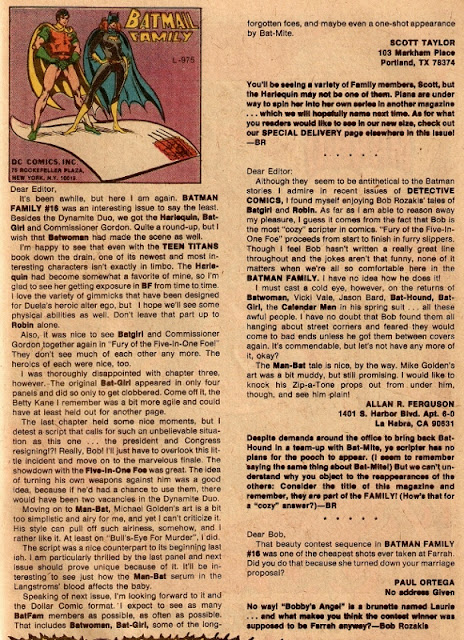 SKREEK!!
Man-Bat was created by Frank Robbins and Neal Adams
Posted by Russell Burbage at 8:00 AM