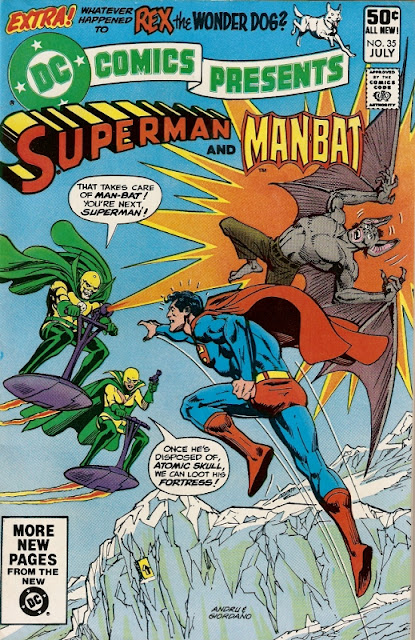 Synopsis:
As newscaster Clark Kent finishes anchoring The 11 O'Clock News, one of the crew asks him to return a reel of film to STAR Labs. He uses his x-ray vision to see if anyone is there so that he can fly over when he is surprised to see that Man-Bat is breaking in to the place. 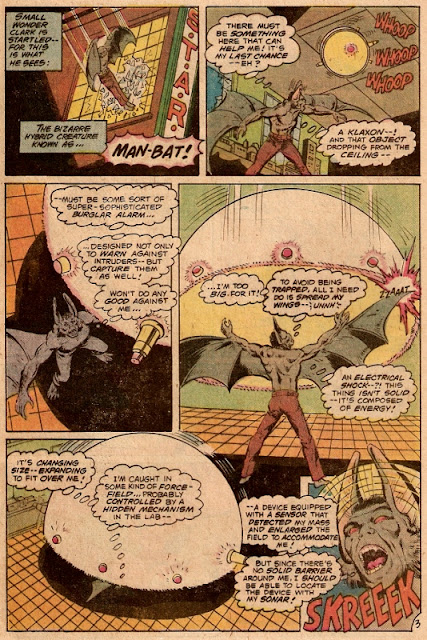 Man-Bat is being attacked by an automated burglar alarm and intruder capture system. He guesses that it is controlled by a hidden mechanism in the lab, and finds that control system by using his sonar power. He then pries open a floor tile and hurls it at the field generator. As the energy field disappears, Man-Bat is attacked by robot security guards. 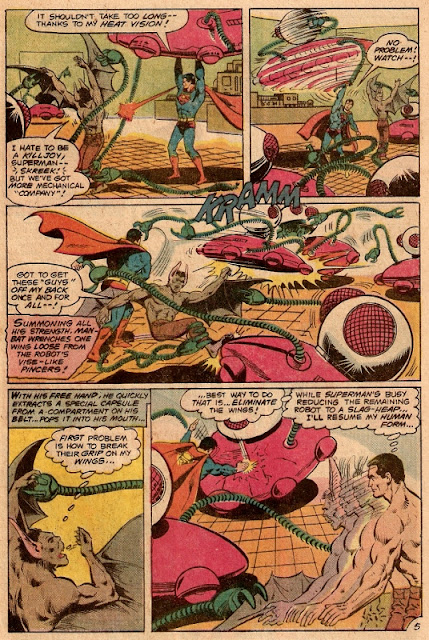 Superman arrives and helps Man-Bat battle the robots. During the battle Man-Bat changes back to Kirk Langstrom in order to free his wings from the robot's grasp. He then cracks "his" robot and faces Superman, who has taken care of the others.

Kirk initially doesn't want to reveal his true identity to Superman, but then decides to trust him because he needs Superman to trust him in-return. He wants Superman to let him look around STAR Labs for something to save his daughter's life. Kirk makes a comment about his wife and daughter being at a nearby hotel, so Superman offers to go back with him. Unbeknownst to Superman and Man-Bat, the Atomic Skull has planted a recording device at STAR Labs and is watching and listening to their conversation. He and his accomplice follow Superman to Man-Bat's hotel, intent on vengeance. 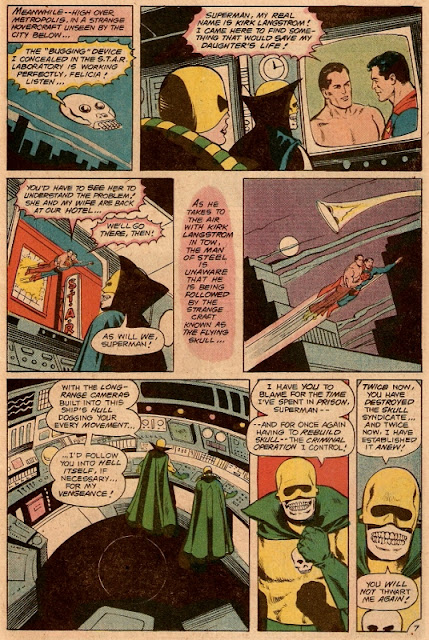 At the hotel, Kirk and Francine explain to Superman how he became Man-Bat, and how she was She-Bat, and how they think that their serum somehow affected their chromosomes so that their daughter, Rebecca, now suffers from acute hearing. Rebecca can't sleep, and if she can't sleep she will die. Kirk had heard about a recent experiment at STAR Labs and had hoped to surgically restore his daughter to normal using STAR's methods. Superman informs the Langstroms that those tests have been cancelled, but he thinks that he might have a device at his Fortress of Solitude that might be able to help Rebecca. Because it's an alien machine he doesn't want to move it, so he offers to bring all of them to his Fortress.

Still eavesdropping from the Flying Skull, the Atomic Skull and his accomplice, Felicia, decide to follow them to the Fortress of Solitude, break-in, and steal the alien device for their own use. The Atomic Skull then conveniently tells Felicia (and us) that doctors in prison had learned how to control the rare neurological disease that had given him his powers. So now the Atomic Skull can harness his radium powered energy at will, not randomly. 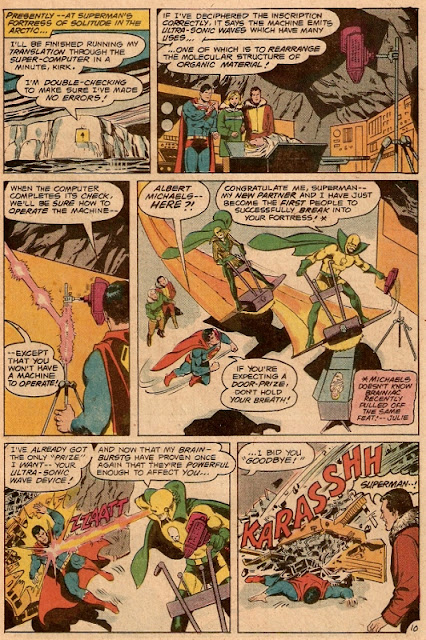 At the Fortress, Superman is about to use the ultra-sonic wave machine to re-arrange Rebecca's ear-drum when the Atomic Skull and Felicia break in on individual flyers and steal it. The Atomic Skull blasts Superman and flies off, but Kirk changes into Man-Bat, then he and Superman follow them.

Superman tries to stop the two villains from reaching their main ship when they blast him with the ultra-sonic wave machine. Then when Man-Bat tries to catch the falling Superman, Felicia hits him with a stun-ray.  The heroes fall into a snow bank. 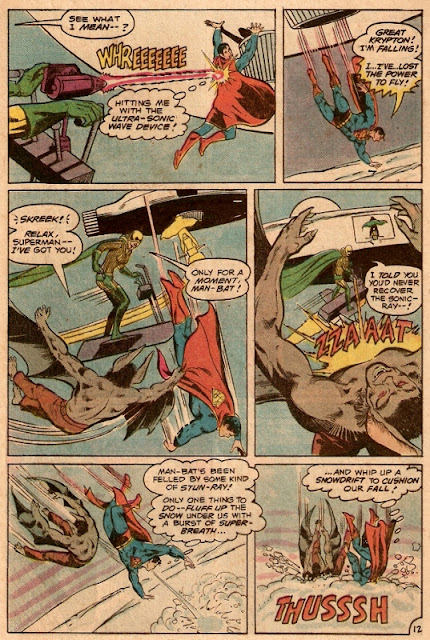 As they dust themselves off, Superman tells Man-Bat that the machine has altered his molecular structure so that he can only use one super-power at a time. As the Flying Skull disappears behind a cloaking device, Superman is ready to give up.  However, Man-Bat reminds Superman that he can track the ship using his sonar power. 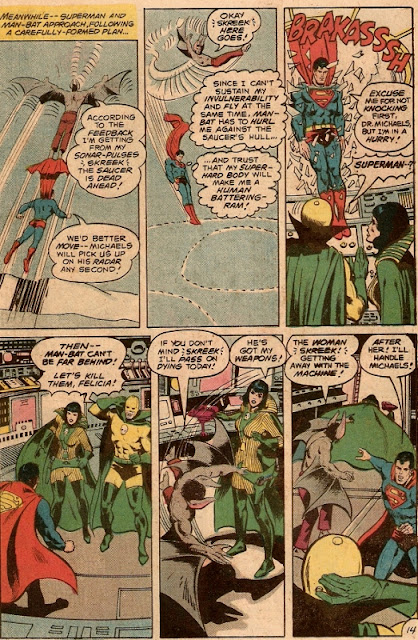 On the ship, Felicia needs the Atomic Skull to use the machine on her before she "changes back." Outside, Man-Bat "sees" the invisible ship and drops the invulnerable Superman onto it. He breaks in, allowing Man-Bat to follow. Man-Bat goes after Felicia, who is holding the machine. Superman faces off against the Atomic Skull. 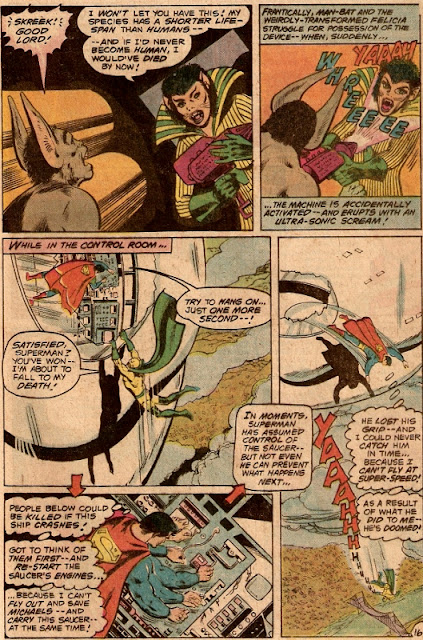 Man-Bat and Felicia fight over the alien machine until it suddenly blasts her. She reverts back to her original form, that of a black panther.

Superman finds the Atomic Skull's work diary, which reveals that Felicia was once a normal panther that the Skull had altered into a human woman. Because he had fallen in love with her, he needed the alien machine to make the change permanent. 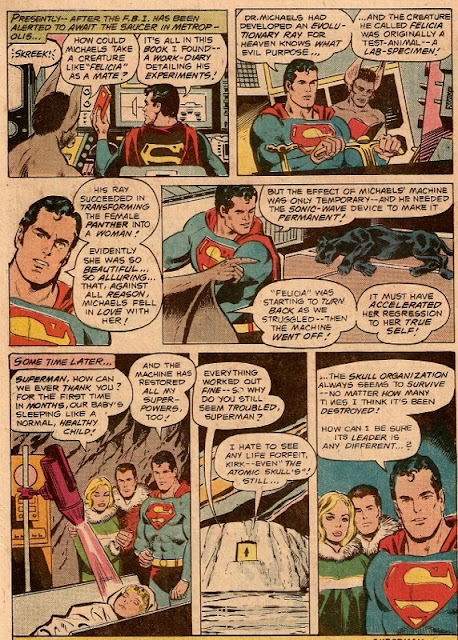 Sometime later Superman uses the alien machine to restore his full super-powers. He then uses it to cure Rebecca. Although Superman is sorry that the Atomic Skull died, he is afraid that the Skull Organization will someday return.

Commentary:
It is difficult to believe that this story was written by the same Martin Pasko who wrote the set-up in Brave & The Bold #165.  Nearly a year ago Pasko set up the scene: baby Rebecca was suffering from acute (dare I say "super") hearing that was preventing her from falling asleep. Concerned that if she didn't fall asleep she would die, Man-Bat began his quest to find a "cure" for her by facing off against Batman and some drug smugglers. This time out, Man-Bat looks for Science for help, and when that doesn't work he looks to Alien Science, which eventually saves her life. Along the way he spends more time in action as Man-Bat than he does whining away as Kirk, and the Atomic Skull is a much more interesting adversary than crooked doctor Lucerne.

However, as mentioned last time, not being able to fall asleep seems like an odd problem to be life-threatening. Surely giving the girl a dose of Z-Quil would have knocked her out? So right off the bat (sorta speak) I'm not buying into the premise of the story. Then I don't understand how when Superman, who has never met Man-Bat before, sees  Kirk breaking into STAR Labs, his first thought isn't to *help* the robots stop him? Superman has a throw-away line about "This must be the Man-Bat that Batman told me about" but how does that make it OK to destroy (?) several million dollars worth of security robotics? Things that make me go hmmmm.....

Likewise, the Atomic Skull just so happens to be in need of the same "metamorphosis machine" that the Langstroms are needing? How convenient! Seems like it would have made more sense (and been less of a coincidence) if the Atomic Skull simply wanted the machine for his own vague diabolical needs, instead of just so happening to need it desperately to keep his own black panther woman around. Also, ewww.

Artists Curt Swan and Vince Colletta are serviceable. Their Man-Bat looks sufficiently heroic while also looking mildly horrific. Check out page 3 reprinted above to see what I mean. Also, I think I like the splash page more than I like the cover (by Ross Andru & Dick Giordano), which is pretty pedestrian. 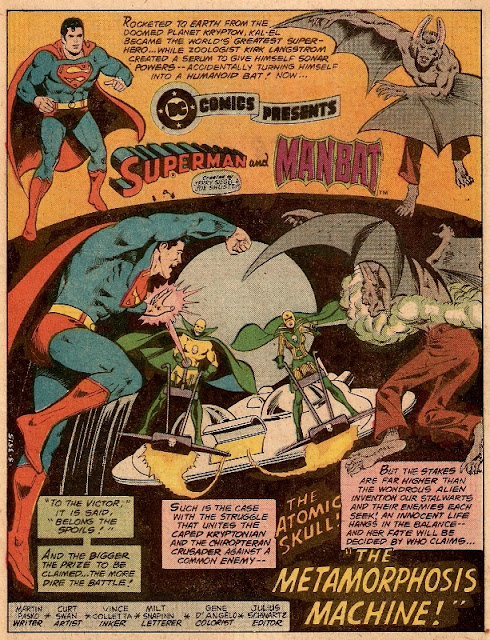 Although no one knew it at the time, with this story the heroic aspect of Man-Bat goes into hibernation. When we next see this great character, the tragedy of his split personality will again be the main focus.

Status:
This story has been reprinted in the following:
DCComics Presents The Superman Team-Ups Vol. 2 OR

Man-Bat Trivia Notes:
Status:
This story has been reprinted in the following:
DCComics Presents The Superman Team-Ups Vol. 2 TPB

SKREEK!!
Man-Bat was created by Frank Robbins and Neal Adams
Posted by Russell Burbage at 8:56 AM