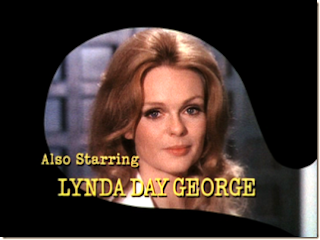 Tomorrow Dec 11 is Lynda Day George's birthday. The actress most famous as spy "Casey" in MISSION IMPOSSIBLE on seasons six and seven (1971-1973) was born in 1944 in Texas. 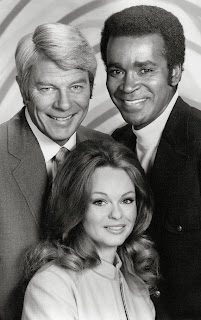 Lynda Day George was the first actress I ever knew from MISSION, as I started watching the show in its last season. In high school I had a photo of the leads from the last year on my wall. It wasn't until I was in college and happened across reruns of the original MISSION that I first learned about Barbara Bain, Lee Meriwether, Lesley-Ann Warren, and Barbara Anderson, the previous female spies. Now that I have seen all seven seasons, I think Barbara Bain (seasons 1-3) had the best episodes, but I will always have a soft pot in my heart for Lynda.

Here's an extended scene of Lynda from the last season episode, KIDNAP. In this episode IM leader Jim Phelps has been kidnapped and held for ransom. The rest of the team has to acquire a bit of evidence that is locked in a bank's safe deposit box...so Lynda poses as a rich widow with asthma in order to break in. You can catch a bit of her Texas twang while she's talking.