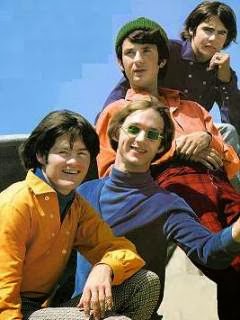 Because of three very important events that occurred in the history of the super-group The Monkees in the month of December, we are going to be celebrating the group ALL MONTH LONG!

First of all, a brief introduction. When The Beatles hit big (they were huge, by the way) they made a movie called A Hard Day's Night. This Richard Donner film about the daily lives of pop stars was also a huge success. Producers Bob Rafelson and Bert Schneider decided to come up with a similar idea for US television. So on September 8, 1965 they placed an ad in Daily Variety for an open audition for musicians and singers for acting roles. Eventually they chose David Jones, Mickey Dolenz, Peter Tork, and Michael Nesmith. The series The Monkees premiered in September 1966 on NBC-TV, and the world would never be the same.

The Monkees recorded as a pseudo-real rock band and eventually became a real presence in the musical world. They had a dozen popular songs and three Number One USA songs: Last Train to Clarksville, Daydream Believer, and one of my all-time favorite songs, I'm A Believer. It was originally written by Neil Diamond (check out *his* version of this song here if you're a Neil Diamond fan) but the Monkees made it their own. It premiered on The Monkees TV show and was released in the fall of 1966; it hit the top spot in December 1966 and was Number One for seven weeks, making it in some lists I've seen the Number One Hit of 1966.

Email ThisBlogThis!Share to TwitterShare to FacebookShare to Pinterest
Labels: Music Monday, The Monkees