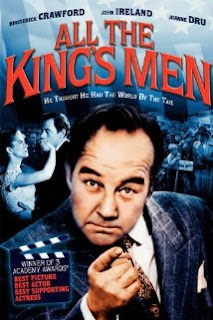 All The King's Men is an odd movie about an odd book. Compared to contemporary Best Picture winners such as Going My Way and The Best Years of Our Lives, this film seems to suggest that there is a definite veneer of evil behind all things "good." It's a cynical, depressing story told well; in that regard it's more similar to The Lost Weekend or Going My Way. From a historical point of view, it seems like the United States was looking at "the evil that men do" and trying to comment on it. 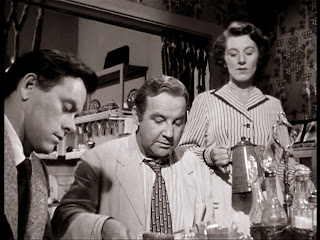 The film tells the story of Willie Stark, a lawyer who runs for treasurer of some podunk town named Kanoma County in an unnamed state (which appears to be Louisiana). He runs up against the political machine and loses that race badly. However, one of his talking points is the cheap bid on the local elementary school construction. When a fire escape collapses a few years later, Willie is remembered for championing against the slipshod work. At the same time, the governor is running for re-election. His jaded political staff decides to get Willie to run in the race as well, hoping to off-set the governor's opponent's votes. Unfortunately, Willie believes he is drafted to run because of his integrity. When he learns that he is being played, he gets drunk and then, in one of the best scenes of the movie, makes a speech where he actually begins to really run for the governorship. He embraces the challenge and the dirt and the "do evil to do good" mandate. He loses this run, but four years later is elected governor.
The story is also about Jack Burden, a ne'er-do-well who is working as a reporter when the film opens but eventually becomes Stark's public relations man. He believes in Stark at the beginning, and is instrumental in opening his eyes to the fact that he (Stark) is being used by the then-governor. However, Jack comes to realize that Stark is embracing darkness in order to achieve power. And the film begins to present to us the question, DOES the end justify the means?
Because, slowly but surely, Stark becomes a womanizer and old-style political boss. He hires the very people who opposed him in his original race to be treasurer in Kanoma, "to keep an eye on them" but also to take advantage of how to win elections. He learns how to win, and more importantly, how to stay in power.

To build up his support across the state he had chosen a respected retired judge (an old family friend of Jack's) to be his Attorney General. However, this ends badly when the judge eventually learns of a scandal involving kick-backs to the Governor's staff. The judge goes public with the charges, and Willie has to fight it out on the floor of the state senate as well as in the field of public opinion. Things continue to go badly for the political machine of Willie Stark, even as the state begins to prosper and the average citizen's lot in life improves. Finally, when Governor Stark black-mails the judge to shut him up, things really go badly. 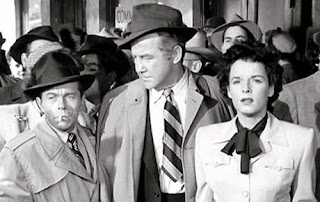 I read the novel in high school Social Studies class as a "biography" of Senator Huey Long of Loisiana, but the author, Robert Penn Warren, is on record as saying that the story of Willie Stark is NOT the story of Senator Long. Suggested by it, maybe, but not OF it. So when I saw the movie a few years later, I knew what I was getting into. The book is better, because it is able to talk about the inner demons driving Stark and Jack to be better, even when they are doing evil. The film, on the other hand, suffices with close-ups of John Ireland as Jack looking pensive or Broderick Crawford as Willie being bombastic. Broderick Crawford won the Best Actor for this role, and it is a doozy. He goes from "country hick" to slick governor in a believable style. He makes the film watchable; he is riveting. Mercedes McCambridge won Best Supporting Actress as the political staff-woman who originally works against Willie and then works for him. She eventually falls in love with him, even though he has no idea. She, too, is riveting in all of her scenes; she portrays a strong, feisty, almost unlikeable female character the likes of which we don't see very often in Hollywood films.

Something that I didn't really understand was the relationship between Jack and Anne Scranton; when she is introduced they seem to be engaged. Pretty quickly, however, Anne is shown to be the governor's mistress, and how that eats up Jack is never really explored.

As a political thriller there isn't much to this film. As a political melodrama, it begins to sink under its own weight towards the end. But as a character drama, or as an allegory of "Good" versus "Evil", it is definitely worth watching.


Also Nominated:
(in alphabetical order)
Battleground
The Heiress
A Letter To Three Wives
Twelve O'Clock High
This is another year where I haven't seen the majority of the nominees. Battleground was absolutely unknown to me. I have seen The Heiress because it was on Japanese TV once. It won Olivia deHaviland Best Actress for her role as an unattractive yet wealthy woman being wooed by debonair Montgomery Clift. Twelve O'Clock High stars Gregory Peck as a bombardier commander; one of its actors, Dean Jagger, won Best Supporting Actor. And A Letter To Three Wives won Best Director and Best Screenplay for Joseph Mankiewicz, but I had never heard of it before researching this article. By the way, this is the second year in a row where the Best Picture and Best Director were not awarded to the same film. Anyway, we'll talk more about Mankiewicz next week.
Posted by Russell at 7:00 AM