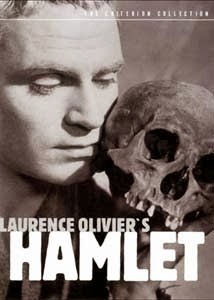 The Best Picture of the year 1947 as chosen by the Academy of Motion Picture Arts and Sciences was Hamlet, from a story originally written circa 1590. This makes this film the oldest screenplay to ever win an Academy Award for Best Picture.

Full disclosure: I love William Shakespeare and have since high school, when I read Romeo & Juliet and saw the (1968) movie. In college my advisor was a Shakespearean scholar. I own a copy of The Complete Works of William Shakespeare and have read or seen most (?) of them. One of Shakespeare's friends was named Richard Burbage, the lead actor of his troupe. It is usually assumed that he was the first actor to portray not only Hamlet but also King Lear and Othello, among other characters. So I sometimes wish I knew for sure that we were related. I like to think that we are. 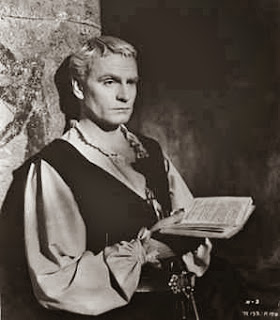 That being said, Hamlet is my least favorite Tragedy and this particular version was especially annoying.

Hamlet is a story about a man who initially cannot make up his mind as to what he should do. When he does decide on a course of action, he has to pretend to be crazy in order to hide his true ambitions. So as an actor it is a plum role. You are a man in mourning in Act One, you have to argue with yourself to decide what and who you believe in Act Two, you have to act crazy (or, perhaps, act on your insanity) in Act Three, you have to connive against your enemy in Act Four, and then you have to face the consequences of your actions in Act Five.  So there is a lot of emoting to be done, and as an actor you are in the vast majority of the scenes. However, if you are not a likeable presence with a strong attraction to the audience your self-loathing and indecision becomes not tragic but annoying. You're not musing, you're whining. You're not plotting, you're confused. See where I'm going with this? 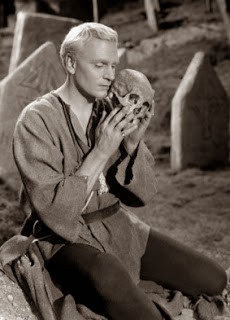 For those of you who may not be familiar with the story: Hamlet's father The King has died, and Hamlet's uncle Claudius has taken the throne. (Why it didn't go to Hamlet, I have no idea.) Not only that, but Claudius has married his sister-in-law, Hamlet's mother. So Hamlet is not happy about what has happened. Suddenly, a ghost, who appears to be the dead king, tells Hamlet that Claudius actually murdered him in order to usurp the throne. Hamlet believes the ghost but can't decide what to do about it. He turns away from all of his friends and his erstwhile girl-friend, Ophelia, because he believes them loyal to Claudius. Keeping his own console, he eventually decides to let Claudius know that he knows. Hamlet kills Polonius, the Royal Chamberlain, thinking it is Claudius. Polonius' daughter Ophelia basically has a nervous breakdown and then drowns herself. His son Laertes returns and swears revenge on Hamlet; they duel, but Claudius conspires to kill both of them. In the end, everyone dies. I'm not really spoiling anything; by definition in Comedies everyone falls in love; in Tragedies, everyone dies.

The actual play has been clocked at running 4 hours, but the film is only two, so there were quite a lot of things cut. The only thing I noticed, however, was the editing out of Rosencrantz and Guildenstern, two friends of Hamlet's whom Claudius uses in his plot to kill Hamlet. 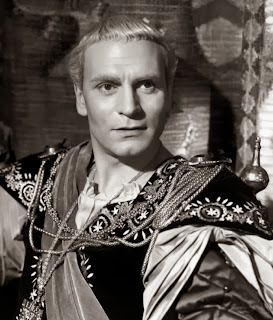 So what didn't I like? Right off the bat Olivier chooses lines from the play to begin, which is fine, but he also  "breaks voice" and says, "This is a tragedy of a man who could not make up his mind." First of all, adding to Shakespeare? Uh, not required, thanks. And trying to summarize a classic story in one line, right before you *tell* the story? What was he thinking? Right off I thought, "Uh-oh."

There's a lot of fog in Denmark.

The set was impressive. However, how many times did we have to see stairwells, walls, windows, and halls in the castle? The huge room where Act Five is set was stupendous, but the rest seemed like just so many stages with tapestries on the walls. 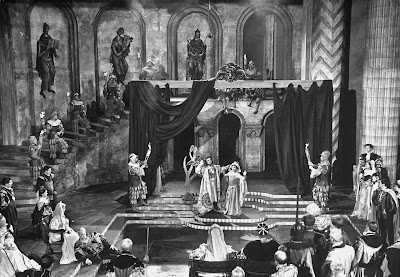 The first forty-five minutes were interminably dull. I think we could have lost the first scenes where we establish that there is a ghost and moved the story along a lot faster. Because one of the themes of the story is whether Hamlet is crazy or not, establishing that there really is a ghost under-cuts that notion. This is fine; it lets the audience "in" to the fact that the murder really did take place, but in the grand scheme of things it just
wastes time. It would have been just as good if Horatio had come to Hamlet and told him that he had scene the ghost of the dead king....which is what happens, anyway!

Olivier as Hamlet seems old. He was born in 1907, which means he would have been about 40 here and, unfortunately, he looks it. Jean Simmons, who played Ophelia, was actually twenty years younger than he. Hamlet is supposed to be a young man, so right from the start I had trouble believing him in the role. His dyed-blonde locks didn't help, and their scenes together don't gel whatsoever. She played sufficiently crazy as the pawn between her father and the King and Hamlet, though. 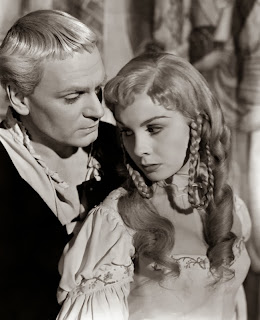 Speaking of the women in the film, Eileen Herlie plays Hamlet's mother The Queen. She goes from stoic ("I did what I had to do") to frantic (thinking Hamlet is going to kill her) to resigned (drinking poison meant for Hamlet). She is, literally, all over the place, and not very believable in any but the first characterization. Likewise, Claudius (portrayed by Basil Sydney) does not get to be the mustache-twirling back-stabbing villain that I expect him to be, yet he isn't possessed by any remorse, either. He is subdued and then frantic. It is almost as if he did his plotting out of love, in order to marry The Queen. This seems possible but a bit odd, as he plots to kill his nephew in order to strengthen his grip on the throne. 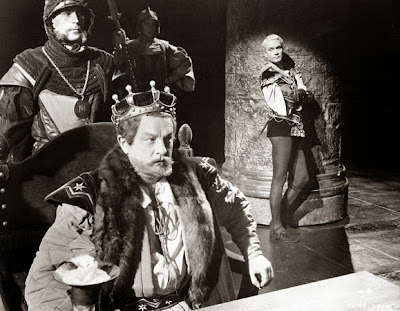 I have no doubt that in 1947 this film was a stellar example of film making. It somehow convinced the entire Academy that it deserved not only Best Picture but also Best Costume Design, Best Art (Set) Direction, and that Laurence Olivier deserved Best Actor, It was also nominated for Best Director, Best Supporting Actress (Jean Simmons), and Best Score, but did not win these. However, it's a lumbering work of unappealing characters doing nothing and going crazy while not doing it. Stick to Romeo & Juliet (1968), Macbeth (1971), Macbeth in Japanese, Throne of Blood (1957), or King Lear in Japanese, Ran (1985). Or even To Be Or Not To Be (1939), the comedy about Jewish actors putting on a production of Hamlet while trying to escape from Nazis. I enjoyed all of these much more than I enjoyed Hamlet. 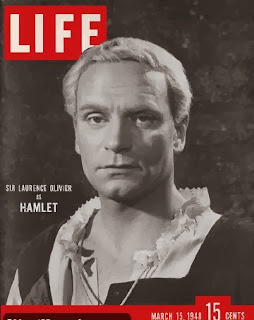 In lieu of a trailer, here is all you need to know about Hamlet.

Also Nominated:
(in alphabetical order)
Johnny Belinda
The Red Shoes
The Snake Pit
The Treasure of the Sierra Madre
I have seen Johnny Belinda, which is a melodrama about a deaf-mute woman who is raped and believed to be an idiot by the towns-people but who is actually smarter than most of them. Jane Wyman, who had co-starred with Ray Milland in The Lost Weekend, won Best Actress for her role It's a great role, but not a great film. The Treasure of the Sierra Madre is the John Huston film that won Best Director, Best Screenplay, and Best Supporting Actor (Walter Huston, John's father). Humphrey Bogart is at his best at being bad as a drifter in Mexico who happens to hit it rich. If you have never seen this movie, you should see it. Unfortunately, the movie did not win; in my opinion, it should have. This is one of the few times that Best Picture and Best Director were not for the same film. This was a great year for John Huston, though, who also directed Claire Trevor in Key Largo to her Best Supporting Actress award. As for the other two, I had never even heard of them before doing research for this article. The Red Shoes is a British film about ballet. The Snake Pit is a film with Olivia de Havilland as a woman stuck in an insane asylum with no idea why she is there. Evidently it helped push for reformations of institutions after it was made.
Posted by Russell at 7:00 AM