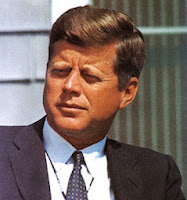 President John F. Kennedy died fifty years ago today. To help mark this anniversary, I thought it would be appropriate for Film Friday to look at several of the films made about that terrible day.

First, of course, is the "home-movie" made by Abraham Zapruder on and at and during that terrible event in Dealey Plaza. Mr. Zapruder sold the rights to the film to Time-Life in 1963, who kept it under wraps for several years, doling it out in snippets for magazine specials and articles of their own. Rights were then transferred back to the Zapruder family in the late 70s or early 80s. The family eventually sold the film as a historical artifact to The Book Depository Museum in Dallas. 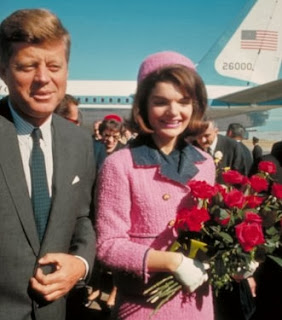 This film is not for the squeamish; make no mistake, it is a film of an actual murder. For me the worst part of the film is the short sequence between the time that the President and his wife realize something is wrong (he's been shot through the throat?) and the fatal shot to the head. If the driver had only sped up during that short window of opportunity, the President would have lived....

A few years ago I came across a film called Image of An Assassination, which was the digitized and clarified version of the actual film. I found it at the Columbus Library, so if you are interested in this you might check your library, too. It is the High Definition version of the grainy hand-held camera film. 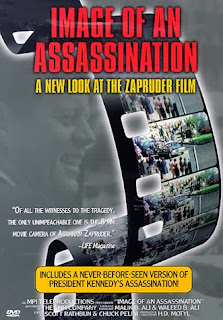 I almost didn't imbed the following youtube version of the film here. It is a terrible, terrible scene to watch. However, it is history. And I wondered how many people reading this have actually had the chance to see the actual film, and not just a snippet or two from other news documentaries or films. The deciding factor to post it here was that the stop-image shown below as the link was not one of the more graphic scenes. So I leave it to you to choose to watch it or to skip on.

The most famous actual film about the assassination is Oliver Stone's JFK (1991). Leonard Maltin says it best when he writes about it, "Full of startling scenes and bravura acting, as dramatic movie-making it's superb. Not to be mistaken for a documentary, however, despite it's sanctimonious attitude towards the truth."

I saw the film twenty years ago when it first came out, and in preparation to write this review I watched it again.

First of all, what the heck is the DVD (poster) image suppsoed to represent? I get the red and white stripes of the flag, but what is that underneath Kevin Costner's face. It looks like a body or a hand or something....I have never understood this image for the twenty years I've seen it.

The film starts with a short mix of actual documentary footage: President Eisenhower's final speech as President in 1960, footage of Viet Nam, and President Kennedy's speech at American University in Washington DC. Then when we see Kevin Costner as New Orleans District Attorney James Garrison, the assumption we have to make is that what we're seeing now is the truth, too. Because Lee Harvey Oswald had lived in New Orleans, Garrison and his staff investigates his activity there. That leads them to believe that there was a conspiracy to kill President Kennedy, and that it had started in New Orleans.

There are a lot of odd things in this film, but it is definitely presented with panache and style. And there are questions raised and comments made that sound convincing. For example, there is a throw-away line about somebody named "Oswald" buying trucks for a shady CIA operative in New Orleans; Oswald was definitely living in the Soviet Union at that time. Is this true? If so, what does it mean? Likewise, the question of why Oswald did not shoot the President as his motorcade was coming towards the Book Depository, rather than driving away from it. There might be a perfectly simple explanation, but it is a good question. However, Garrison's hypothesis seems to be that there were three snipers ready to kill the president in a crossfire. Yet he admits that most of the shots these snipers allegedly fired MISSED their target! So where did they go? The film is a technical marvel, but sloppy police work. 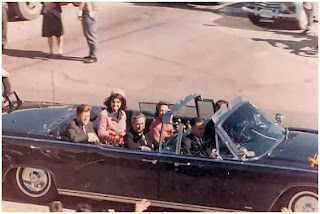 Even though Costner portrays Garrison as a beacon of moral fiber, eventually he starts to appear to be a tad paranoid. Every rhetorical question is answered with , "Because there's a cover up!" The staging of the "Magic Bullet" scene in the courtroom is well done, but all through it I kept thinking, "what if the position of the two victims (the President and Governor John Connelly) was off; wouldn't that explain the trajectory? If there was some way to sit the two men at the same line of fire as the bullet, wouldn't that explain it? Also, if there WAS more than one "magic" bullet...where did it/they go? Neither of the wives were injured and no bystanders in Dealey Plaza were wounded, either.

After I saw JFK the first time I managed to buy a copy of the book by Jim Garrison, On The Trail of the Assassins. It was interesting reading, but did not convince me that the CIA or anybody in the US government had conspired to kill the president. Soon after that I also read the 1993 book Case Closed by Gerald Posner. It basically debunks a lot of the myths, half-truths, and rumors around the assassination. It specifically makes the case that Oswald could have done all that he was alleged to have done. What I remember most about the book was that Posner interviewed the people close to Oswald at the time. One swore that Oswald brought what he claimed were curtain rods to work that Friday morning. And Oswald's wife swore she took the notorious photo of Oswald in the backyard posing with his guns. So there seems to be a clear trail to this particular assassin. I also have read parts of Vincent Bugliosi's book Reclaiming History, which criticizes the film from top to bottom. (I have his book to thank for my earlier comment regarding the quality of the marksmanship of the professional assassins that Garrison believes did the work that day.) Most importantly, although Oliver Stone (and Jim Garrison, I guess) tried to paint a picture of a conspiracy, that picture ignores the dozens of actual witnesses who *saw* the rifle jutting out of the sixth floor window of the Book Depository and *heard* the three shots come from that rifle. 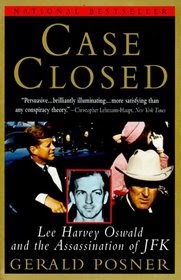 For another point of view, I recommend the 1973 film Executive Action. In this film, Will Geer ("Grandpa" from The Waltons) plans the assassination of the president. It's a chilling account of how a conspiracy would work if it had happened. Like movies such as Raise The Titanic, however, it's patently (?) fiction.