The Bridge On The River Kwai (Best Picture 1957) 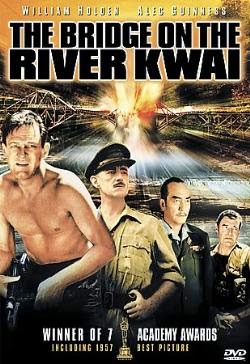 The film The Bridge On The River Kwai begins with a haggard bunch of British forces marching through the forest. It turns out that they are prisoners of war being escorted to an internment camp. The first character we meet is William Holden as he and a buddy are burying bodies. They wonder aloud at how long these new prisoners will last. Disheartened, they bribe their guard to get put on sick leave so they can rest for a day or two. 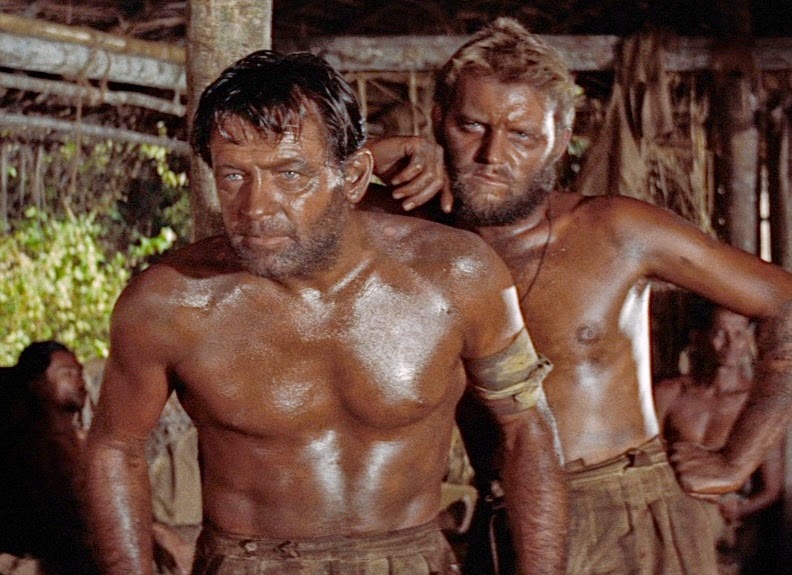 As the British march into the camp, they have metamorphosed from disheartened losers into His Majesty's Troops. They are lead by Colonel Nicholson, portrayed by Alec Guinness. Nicholson is a stubborn and somewhat odd officer who still manages to command his men's respect. Immediately the troop is presented to Colonel Saito, played by Sessue Hayakawa, the commanding officer of the camp. He tries to impress his authority on the men, insisting that the bridge they are building will be built by all the men, including the officers. Nicholson refuses, and the drama at the core of the film has begun.

The rest of the film deals with how these two incredibly stubborn and insecure men deal with their power: over their men, over each other's men, and over each other. When Saito orders Nicholson to comply and Nicholson refuses, he throws Nicholson into "the oven." When Saito realizes this will not break the will of the Englishman, he uses flattery and praise instead, playing Nicholson as the proud idiot that he is. When Nicholson believes that he has won the war of nerves against Saito, he ends up giving him everything he had earlier demanded and more. It's one of the great ironies of the film that the two main antagonists never understand each other. In a late scene after the bridge is built Saito is looking at the surrounding scenery from atop it and says, "It is beautiful." Nicholson thinks he is talking about the bridge, and when he goes into a critique of the architecture Saito looks at him as if he were crazy.

So let's talk about the bridge. Saito has orders to complete it by May, but without the cooperation of the British prisoners there is no way that he will meet this deadline. He is actually contemplating suicide for his failure. Then Nicholson gives him the idea to harvest the British know-how and pride instead of trying to overcome it. Saito in effect becomes the CEO of the camp with Nicholson becomes the President! Nicholson decides to use the bridge as a tool to keep his men's morale up. Only one of his staff argues against cooperating: he sees it as traitorous to build the bridge for the Japanese. Nicholson over-rules him and dismisses his concerns, saying that this officer obviously doesn't know anything about the Army. If there is a flaw to the film, it is its lack of effort to try to show Nicholson's opinion more clearly. While morale, fitness, and discipline are certainly things that the prisoners should strive for, building a bridge to help their enemy certainly sounds traitorous to me! Either Nicholson is incredibly naive or incredibly stupid, we're never sure which.

Meanwhile, Shears and his buddy attempt an escape. His friend is killed, but Shears somehow manages to make it to a local village and then into the ocean, where he is picked up by US Naval forces. The parallel story of Shears' escape and return to civilization helps paint the desolation and pain of the camp in even more stark contrast. The Allies have heard that the camp is building a bridge over Kwai and realize the importance of it. They decide that the Japanese must be stopped, and discuss with Shears all about the location and conditions. Much to Shears' chagrin, he is then ordered to help lead a group of demolitionists back to the camp to destroy the bridge.

The film is a classic and deserved to win Best Picture for the overall production and scale as well as for all of the little moments. For example, look at those photographs above. This film was photographed on location in Ceylon (now Sri Lanka) by Jack Hildyard. The greens, blues, browns, and golds are luscious. You can't feel the heat, but you can definitely appreciate the beauty that Saito sees. As for the characters, there is a wonderful bit where Nicholson is dragged/carried from "the oven" to see Saito in the middle of the night. He refuses to budge and is put back. When Saito relents and calls for him again, this time in the daytime, Nicholson refuses to be carried by the Japanese troops; he insists on walking, however slowly and gingerly, to show his troops that he had not been broken. It's a telling character trait. 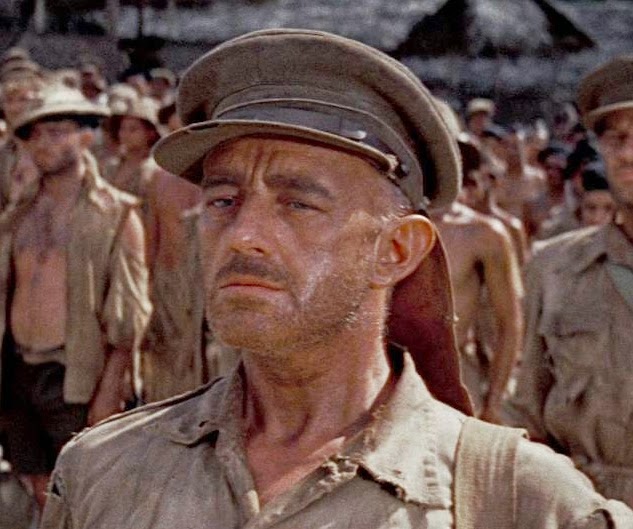 Alec Guinness and Sessue Hayakawa are terrific as the officers involved in the main drama. Guinness plays Nicholson as an idiot; or is he clever like a fox? Even at the denouement does he do what he does knowing what he is doing, or is it an accident? It's a wonderful performance. I have read that at times he thought that director David Lean was having him play Nicholson as an idiot; however Nicholson never thought of himself as anything less than an example of His Majesty's Forces. Hayakawa, although he has less screen time than Holden and Guinness, manages to bring such a presence to his scenes that you never forget that he is like a crouching tiger. In an early scene he intends to slaughter the entire British officer corp until the doctor stops him; during this scene, he barely moves. In one of the Saito-Nicholson face-offs he goes on a rant, screaming at Nicholson, 'I hate the British!" It is the most emotional he gets in the film, but instead of helping you understand him it makes you anxious that there definitely is something to fear from him. Hayakawa was nominated for Best Supporting Actor, but lost to Red Buttons playing an American in love with a Japanese woman. 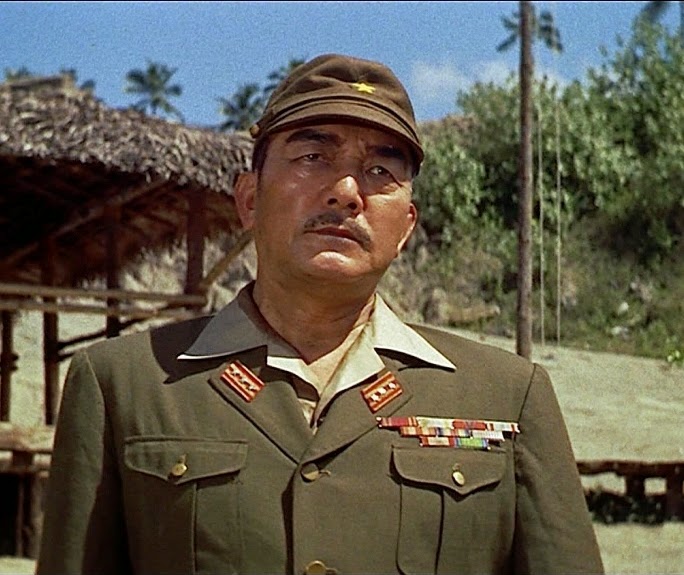 The film The Bridge On the River Kwai is fictional, but the story is based on camps that existed during Word War II. The screenplay was based on the French book by Pierre Boulle, who also wrote The Planet Of the Apes. I would recommend this film for the story, the acting, and the location scenery. As the world continues to get smaller, this is an important film about how some people simply don't have the same "shared" ideas, and nationality has nothing to do with it.
The Bridge On The River Kwai
*Academy Award Best Picture of 1957*
Produced by Sam Spiegel
Directed  by David Lean
Screenplay by Pierre Boulle, Carl Foreman, and Michael Wilson
Based on the book by Pierre Boulle

TRAILER
Wow, except for not calling out Claude Rains, this is a great trailer!
It makes me want to see the movie again!


Also Nominated:
(in alphabetical order)
Peyton Place
Sayonara
Twelve Angry Men
Witness For the Prosecution
I have actually seen all five of these nominees! I had seen all of them before except Peyton Place, so I borrowed that from the library recently to watch it. It was surprisingly good; I could totally see why and how it started a whole "melo-drama" sub-genre on film and television. Lana Turner and a young Hope Lange (later of "The Ghost & Mrs. Muir" and "New Dick Van Dyke Show" fame) were both nominated, but neither won. (JoAnne Woodward of The Three Faces of Eve and Miyoshi Umeki of Sayonara won.) Sayonara is another Japanese-related film: in this one, Marlon Brando plays an officer who falls in love with a Japanese actress. Red Buttons and Umeki play husband-and-wife who help them in their relationship. Buttons won Best Supporting Actor, preventing Hayakawa from winning for Bridge. Hayakawa's loss was the only nomination that Bridge did not win. Twelve Angry Men is the Henry Fonda court-room drama of the jury in a murder case going over the case until they can reach a verdict everyone agrees with. If you have not seen this yet, you should. And Witness For the Prosecution is probably the best film made from an Agatha Christie story. Tyrone Powers is accused of murder, Marlene Dietrich is his wife, and Charles Laughton is his lawyer. Doesn't that make you want to see it? If you know anything about murder mysteries by Dame Agatha, you know that everything is not as it seems.
Posted by Russell at 6:00 AM