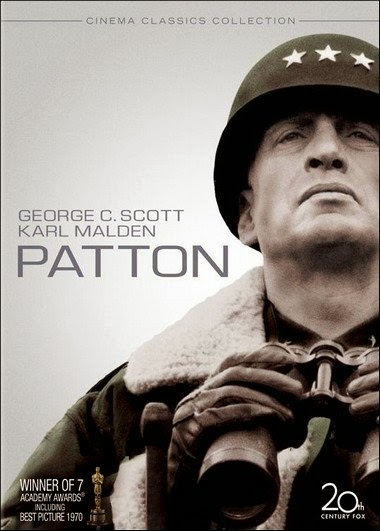 This film is absolutely not my kind of motion picture. First of all, the subject holds no interest to me. I am not a big fan of war movies, but if the story is about the generals in control (?) and not "the boys" actually living and fighting and dying, I am absolutely not interested. Give me "Platoon" or Letters From Iwo Jima" over this type of "epic" any day. Then on top of that if the main charcter is loud and obnoxious and difficult to deal with, my interest goes down even more. Such was how I looked forward to watching Patton for the first time.

This film begins with the famous image of General Patton walking up onto a stage in front of a HUGE US flag and giving a speech. It's iconic, but within the context of the film, it doesn't make any sense. Who is he talking to? He says things like, "You boys..." but it's a monologue, and no audience is present. He has all (most?) of his medals pinned to his chest, but he seems to be speaking from a time before he was a "hero." What does it mean? If I were an audience member in 1970 would I know?

As soon as he finishes his speech and walks off the stage, the film begins properly, somewhere in Africa. An army unit with no discipline has been routed by the Nazis. Their new commanding officer (guess who) shows up early and begins to instill Army discipline immediately. For example, he insists the field doctor wears a helmet at all times. Soon, Patton plans a charge to face Nazi General Rommel's forces. His troops rout them, and he begins his ascension in the press. The rest of the film is a series of battles, both military and political. You see, Patton may be a genius on the battlefield, but he is an idiot in the field of public relations. Every time he wins a fight somewhere, it seems, he opens his mouth and says something stupid. The most famous example was when he slapped an enlisted man in a field hospital and accused him of cowardice because the young man was suffering from shell shock and didn't want to fight any more.  The negative publicity surrounding this action creates a situation so bad for Patton that he is ordered to apologize to the man and to the man's entire outfit. In his mind, he is punished by "the brass" for this by not being given any role in the D-Day Invasion. (It couldn't be because he's a self-centered gloryhound?) He is instead shuffled off the main stage to help his rival, British General Montgomery, and his former underling-now superior, General Bradley, in the rear lines. When US troops near the German border need support, he volunteers "his boys" and they make rapid time to the scene of the fighting. Then when his troops run out of supplies, he is stalled, both literally and figuratively. Patton admits that he lives to fight, and resents not being allowed to. 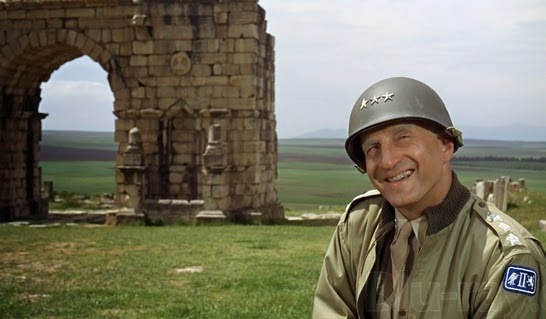 While watching Patton I could not help being reminded of an earlier war-hero biography, Lawrence of Arabia. Both men were egomaniacs, and neither one particularly interested me. Patton read histories, so believed he knew how events were going to transpire based on how they had transpired before. He also read things like Rommel's autobiography, so he thought he knew how the Nazi General thought. There are several scenes where the German forces are shown, talking about how Patton is the Allies' greatest general. Patton also believed in reincarnation; there was one scene where he stopped in a deserted village and talked about how it had faced war thousands of years ago, and that he had been there. So he was something of a sensitive type. On the other hand, when Patton dined with a Soviet General after both sides assisted in the liberation of a French village, it's the Soviet General who was better at politics. The Soviet toasted the US forces and her General, but Patton refused to drink with the Soviet, calling him "a son-of-a-bitch." The Soviet laughs and says, "You are a son-of-a-bitch, too!" This makes Patton laugh, defusing the situation, and the men drink. But this is the kind of man Patton appears to have been. 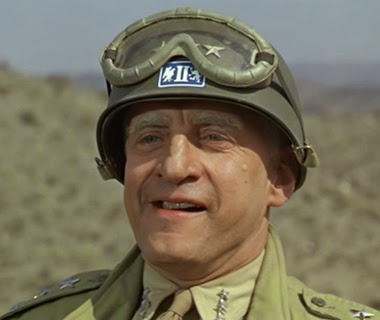 George C. Scott is a wonderful actor, and he owns every scene he is in. Unfortunately, he's in all of them. Patton is rude, small-minded, self-centered, and lacking in thoughtfulness. These traits over-shadow his intelligence and loyalty. After three hours with him I felt I knew him, and was glad that he won the Academy Award for Best Actor....but I never wanted to see him again. By the way, in true Patton style Scott won the Oscar but refused to accept it, questioning the audacity of the Academy to judge five men and choose one as "best."


Also Nominated:
(in alphabetical order)
Airport
Five Easy Pieces
Love Story
MASH
Of the five nominated pictures, I never got around to seeing Five Easy Pieces. This is the Jack Nicholson drama with the famous diner scene about the sandwich. If you don't know what I mean, go to youtube and you'll find it. By the way, up until the time I did research for this review, I thought the title referenced coins or money of some kind; I was surprised to learn that it references musical pieces. I remember watching Airport as a kid; I loved playful and loveable Helen Hayes, who won Best Supporting Actress for her role as an elderly woman who sneaks onto airplanes and rides for free. Airport as a movie could be blamed (?) for starting the Seventies' "Disaster Movie" trend, but it really is a pretty good film. However, Love Story is not! I  had never seen this weeper but I had heard of it, of course. At only about 90 minutes it's silly and pretentious. And (Spoiler Alert!) who starts a movie about a shocking death by announcing it in the first scene? Lastly, MASH is more famous now as a television series, but the film is definitely cutting edge Hollywood. If you only know MASH from the TV series, you should try watching the film. You will be surprised how dark and different it is.
Posted by Russell at 7:00 AM