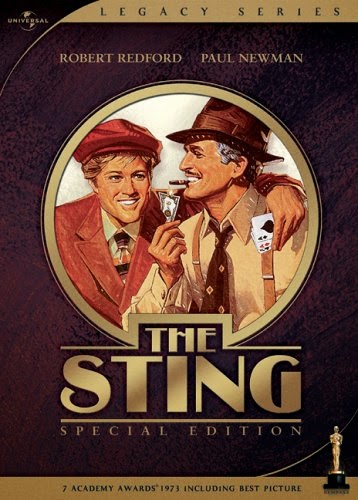 The Sting is one of the greatest films of all time. If you haven't ever seen it, you should go to your local library TODAY and reserve a copy. It is fun, dramatic, exciting, and, most important, entertaining. 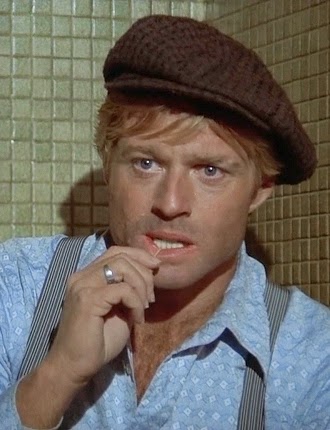 Paul Newman plays Henry Gondorf, a one-time Big Name grifter (con artist) living in Chicago. Robert Redford plays younger grifter named Johnny Hooker, who with his partner Luther steals money from a money-runner working for the powerful crime syndicate belonging to Doyle Lonnegan. Lonnegan has the patsy killed and orders Hooker and Luther killed as well. Luther is thrown out of his apartment window, but Hooker escapes to Chicago. Crooked cop Snyder (Charles Durning) follows him, wanting his cut of the money. 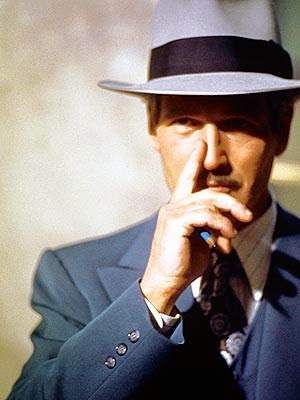 Together, Gondorf and Hooker plot a way to get back at Donnegan (an evil Robert Shaw). They come up with a con based off of horse-racing, and slowly but surely reel Donnegan in. All the time they are plotting their "sting" operation, Donnegan's assassins are still chasing Hooker. Snyder, too, is in the background making life rough for Hooker. And the FBI appears to want Gondorf on an earlier sting of a Congressman. Will the boys and their gang maneuver through all of the dangers they are facing, or will the plot collapse like a house of cards?

Everything about this film is wonderful. The costumes, the sets, and the cars all evoke the mid-Thirties. Each "chapter" of the film is divided into a different section with "cue card" type introductory illustrations: The Set-Up, The Hook, The Tale, The Wire, The Shut Out, and The Sting. The cast is perfect. Besides Newman and Redford, the cons of note include character-actor Ray Walston (South Pacific, "My Favorite Martian"), Eileen Brennan ("Private Benjamin"), and Harold Gould ("Rhoda"), all of whom add a certain panache to the proceedings. 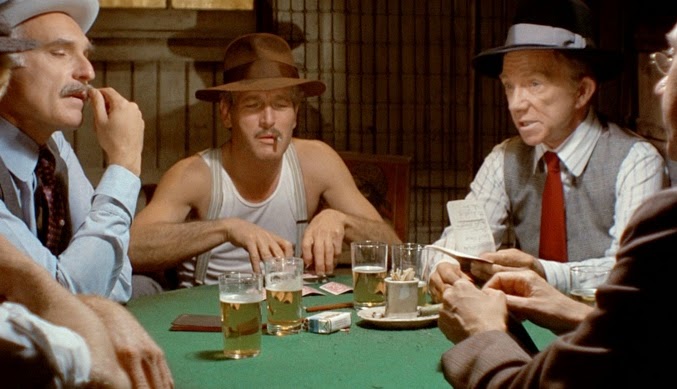 My parents took me and my brother to watch this film when we were kids. I was enthralled; I was already a fan of the TV show "Mission:Impossible", but this was creating a "make-believe" story much more in-depth and dangerously than anything I had seen on *that* show! Every time I watch this film I see something new (and it is one of the Best Pictures that I actually own and have seen numerous times). For example, Paul Newman plays poker with Robert Shaw on the NYC-Chicago train, and they both cheat. It's infinitely entertaining to me to watch each of these great actors rip into the scene, yelling "he cheated better than me!" after the action is over! 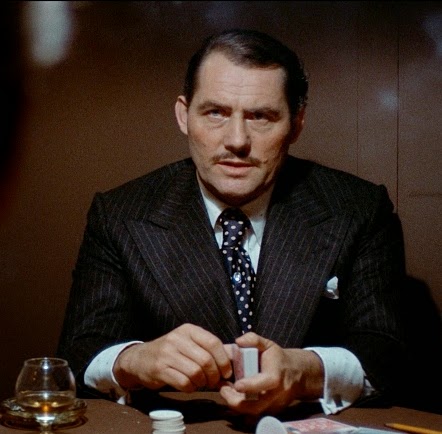 Paul Newman, Robert Redford, and director George Roy Hill met on the set of Butch Cassidy & The Sundance Kid. That film did not win the main Academy Awards, winning only Best Screenplay, Best Cinematography,  Best Score, and Best Song. However,  The Sting was nominated for ten awards and won seven, including Best Picture, Best Director, Best Screenplay, and Best Score (which included "The Entertainer" by Scott Joplin, as adapted by Marvin Hamlisch). Redford was nominated for Best Actor, but lost to Jack Lemmon (Save the Tiger). George Roy Hill later directed Redford in The Great Waldo Pepper and Newman in Slap Shot. 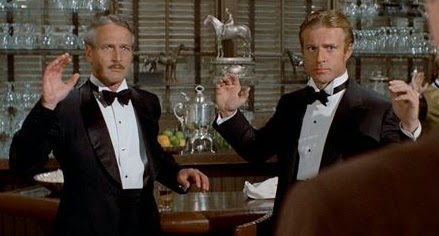 The Sting is one of those movies, like Casablanca or It Happened One Night, that never gets old. It is a timeless film that can be enjoyed by anyone and everyone. The only condition is that you must WATCH it. You can't have it on in the background or half-watch it. To enjoy it totally you need to commit to it. With that stipulation, I absolutely guarantee you will enjoy it.

Gosh, this makes me want to watch it AGAIN...!

Also Nominated:
(in alphabetical order)
American Graffiti
Cries And Whispers
The Exorcist
A Touch of Class
American Graffiti is, of course, the classic "coming of age" story directed by George Lucas that helped create the TV series "Happy Days" and the Star Wars movies. The Exorcist is, of course, the classic horror film about Linda Blair being possessed by a demon. Blair was nominated for Best Supporting Actress, but lost to Tatum O'Neal (Paper Moon), who at 9-years old was the youngest actor to win a performance award. A Touch of Class is a comedy about a married man falling in love with a divorced woman. Glenda Jackson won Best Actress for her role in this. And Cries and Whispers is a Swedish drama by Ingmar Bergman.
Posted by Russell at 7:00 AM