Happy Birthday To Me 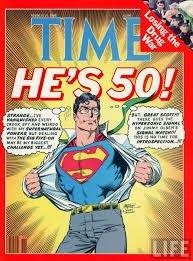 When I was a kid in junior high and high school in the late Seventies I used to think that the year 2000 was SO far away. I couldn’t wait to move forward into the 21st Century….to turn sixteen…then eighteen…then twenty-one. Eventually, however, we entered the New Millennium and I turned into Jack Benny; I wanted to stop at age thirty-nine.

As a younger person did you ever look at a certain celebrities and think, “he’s old!” As a kid everybody is older than you, but some “look” older to you, right? And some never look their age. Jimmy Carter was 52 when he was elected US President in 1976. Tom Bosley was 47 when he started playing Howard Cunningham on TV’s “Happy Days” in 1974. And Julie Andrews was 29 when she won an Academy Award for “Mary Poppins” in 1964.

Speaking of age 29, traditionally that was the age of Superman, Batman, and Aquaman. DC Comics had announced that their heroes were in their late 20s because they didn’t want to break that psychological barrier of having them turn thirty. And when I turned 30, I actually stopped and realized, “Wow, I’m now older than Superman.”

Now I guess I’m as old (or nearly as old?) as Jonathan and Martha Kent, the foster parents of Superman!
I always thought James Dean was young when he died at age 24. George Reeves, who portrayed Superman on TV, died when he was 45. Marilyn Monroe died too young at age 36. Robert Kennedy was murdered when he was 42. Dr. Martin Luther King, Jr was murdered when he was only 39 years old. Flo Ballard, one of the original Supremes, died at age 32.  Elvis died at age 42, but let’s face it, by that point his body was physically much older than that. Three years later John Lennon was murdered at age 40. Marvin Gaye was murdered when he was 44.
And every time I surpassed these celebrities’ ages I thought, “Wow, I’m now older than (that celebrity) was when s/he died.”
Not to be maudlin, but is it natural to think about these things as you get older? Or am I just weird?


Closer to home, my paternal grand-mother died when my father was in high school. So she died relatively young. However, my paternal grand-father and maternal grand-parents all lived until they were quite old. My mother died last year at age 79, although my father is still alive at the same age. I’m the youngest of four kids, and my older brother and sisters are all still quite well. So it’s not like I’m exactly at Death’s door. I recently saw the movie “Annie Hall” and Woody Allen’s character went off on “fear of death” soliloquies twice in that film; his character was age 40. That isn’t me.


So here I am, looking at “the twilight” of my years. It’s been a great life, and hopefully I still have a lot more years of fun and friendship to enjoy. There are stories I want to tell, movies I want to watch, books I want to read, places I want to go. I realized years ago that I will never have the chance to do every single thing I wanted to do in or with my life. Don’t we all get *there*? But I relish every single day, and every experience, and I appreciate every one of you who are out there supporting me. Looking over my fifty years I don’t have any particular regrets. Although I’m reminded of the song “Jack & Diane” (Life goes on, long after the thrill of living is gone), I am also reminded that “it’s really been a wonderful life.”  I guess I’m pretty lucky to be able to balance that dichotomy. If you’re reading this because you meant to (you’re not here by accident to read, say, a review of “The Deer Hunter”) then this is addressed to YOU: Your love and friendship has helped make my life worth living, and I appreciate you more than I can possibly say. Thank you for being there for part of my fifty years, and I look forward to many more adventures with you. Happy Birthday to Me gets a Thank You to You.

By the way, the reason I arbitrarily picked out Jimmy Carter, the late Tom Bosley, and Julie Andrews for my example above is because we all share the same birthday: today!

Email ThisBlogThis!Share to TwitterShare to FacebookShare to Pinterest
Labels: My Birthday, Opinions