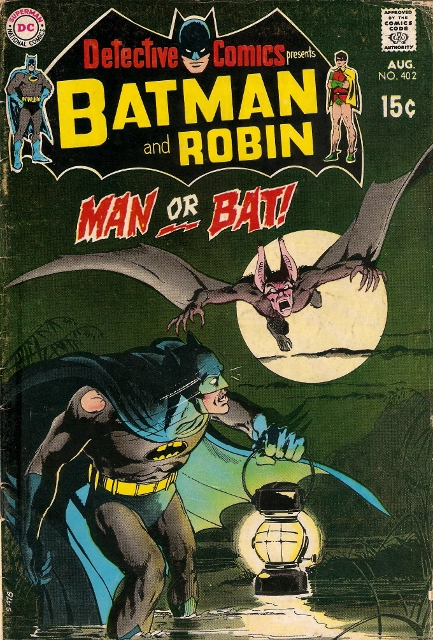 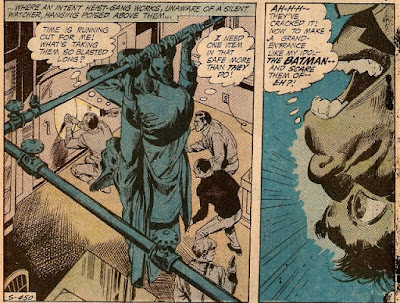 Synopsis:
At Biochem Ltd, Man-Bat is anxiously waiting for crooks to break open a safe. He is hoping to acquire the last ingredient he needs to finish an antidote for the bat-serum he rashly took (in Detective Comcis #400). Unfortunately, Batman bursts in to capture the crooks. Man-Bat has no choice but to help him catch them. After the crooks are all knocked out, Man-Bat insists on leaving money to purchase the drug he needs, but Batman tries to stop him. However, Batman is momentarily shocked to find that what he thought was a disguise is real. This allows Man-Bat to escape. 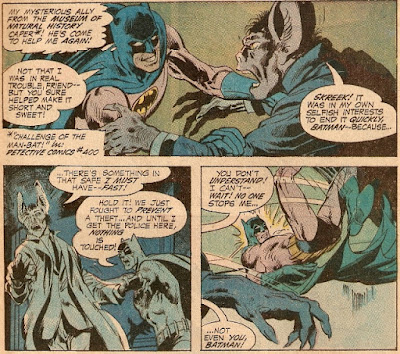 Man-Bat returns to the Gotham Museum of Natural Hisotry. Batman thinks that bat expert Kirk Langstrom might be able to help him with his Man-Bat problem, so he goes there, too. There he meets Francine, Kirk's fiancee. She tells Batman that Kirk never went to Chicago, so they storm into Kirk's laboratory. Kirk, momentarily taken aback, drops the vial with the potential antidote. He then drops out of the window, three flights below, cursing Batman while he does so.

Batman gives chase, following Man-Bat to a nearby cliff. Distraught, Kirk jumps off. Surprising himself as well as Batman, Kirk sprouts wings and flies away. He follows an actual bat into the night sky as Batman calls the police and requests an All-Points Bulletin. 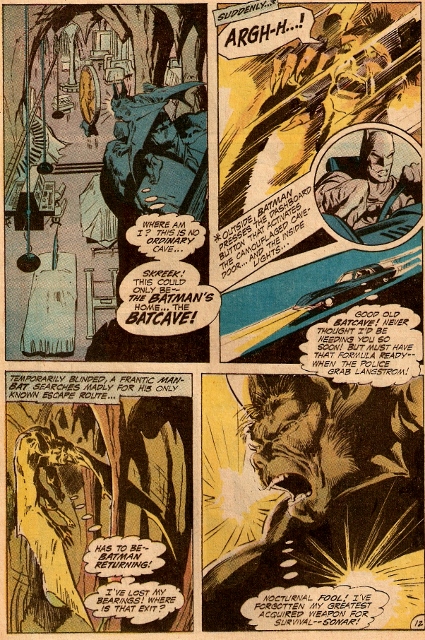 Man-Bat arrives in a cave that turns out to be Batman's Batcave. Before he can really do anything besides get his bearings, Batman arrives. Man-Bat is now frantic to escape, but is blinded by the bright head-lights of the Batmobile. 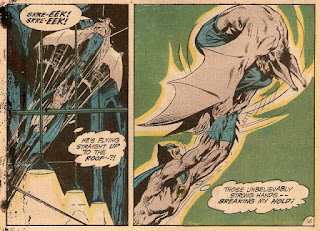 He and Batman fight, then Batman closes the garage door on him, knocking him unconscious. Batman swears to create an antidote to either save Kirk or kill him as a man. 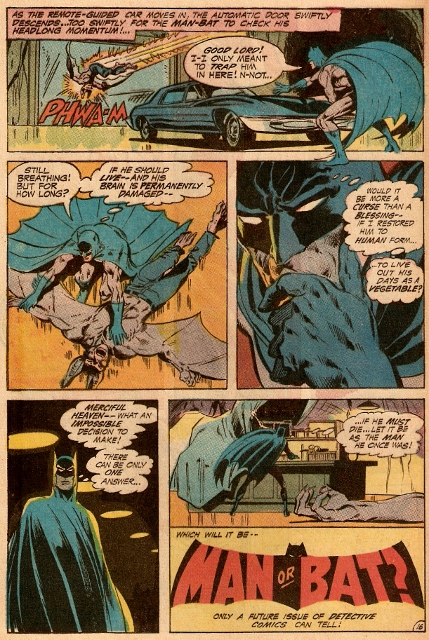 Commentary:
With this chapter, Man-Bat's story veers straight into melodrama. It is one thing to fight over drugs and trying to create an antidote. That is very "Invisible Man" or "They Fly" or "Dr. Jekyll." Wiith the inclusion of a love interest, however, Man-Bat now has an extra level of angst to deal with.

Also, is it too much of a coincidence that Man-Bat flies into the Batcave? I wonder about the geography of Gotham City, what with museums near cliff-side lakes (the ocean?) and then only one big cave full of bats? What if Man-Bat had been guided to a barn out in the middle of farm country....would he have met The Scarecrow, instead?

This story reads like a "part two." And like the initial story, it ends without a real ending. Hopefully something more dramatic and permanent will happen in the next installment.

The visuals are as great as last time, as Neal Adams and Dick Giordano are two of the greatest Batman artists of all time. No complaints about them at all.

This story has been reprinted in the following books:
Batman: From The Thirties to the Seventies
Man-Bat vs Batman (1984 reprint collection)
Batman Illustrated by Neal Adams vol 2
Showcase Presents Batman vol 5

SKREEK!!
Man-Bat was created by Frank Robbins and Neal Adams
Posted by Russell at 6:00 AM