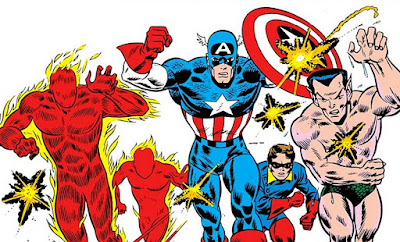 I have always read comic-books. I of course love new stuff, but like new TV, movies, or music you sometimes don't enjoy it as much as you would hope. However, with OLD stuff, you can relive the joy over and over again.

This time I want to talk about a little-known but much-loved series called The Invaders. It was published by Marvel during the mid-70s (1975 ~1979 to be precise). It starred Captain America and his young partner Bucky, the Golden Age Human Torch and his young partner Toro, and the Sub-Mariner. Although it was published in the Seventies, it was actually set during the early days of World War 2...early 1942, I believe.


The stories were set predominantly in England, as these five heroes helped the Royal Air Force keep the Nazis from defeating the United Kingdom (and therefore taking over all of Europe.) It also featured some stories set in Egypt, Russia, and the United States, but mostly it was set in Europe. 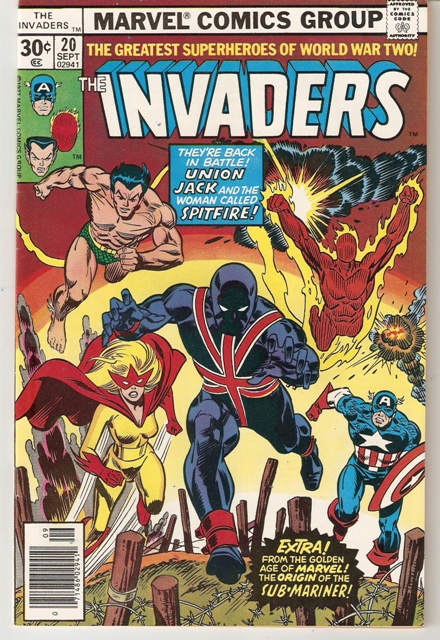 Through 41 issues and a Giant & an Annual, the membership stayed the same with the core three; the young partners left for awhile to help form The Young Allies and as shown here, two British heroes, Union Jack and Spitfire, joined up on several adventures. Other early heroes at Marvel (known as Timely at the time) were also featured, most notably The Whizzer and Miss America. (I am not making this up.) 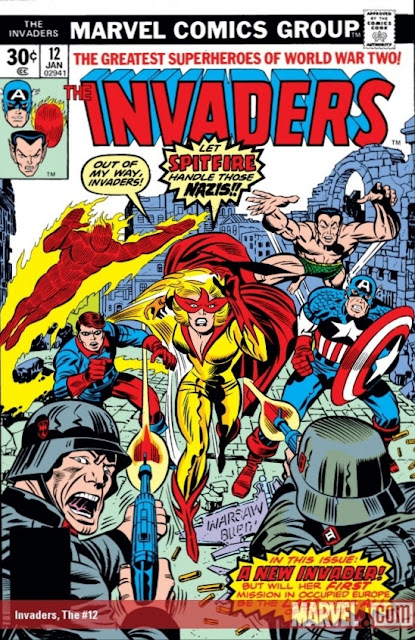 The stories were originally written by Roy Thomas, with art in the early issues by the love-him-or-hate-him Frank Robbins. I was not a fan of Robbins on Batman or Captain America, but for some reason I really enjoyed him on this series. Somehow his style made a series set in the Forties look good. When he left he was replaced by the very capable but less "unique" Alan Kupperberg. Roy left as writer with issue #37 and was replaced by Don Glut, but he remained the editor. 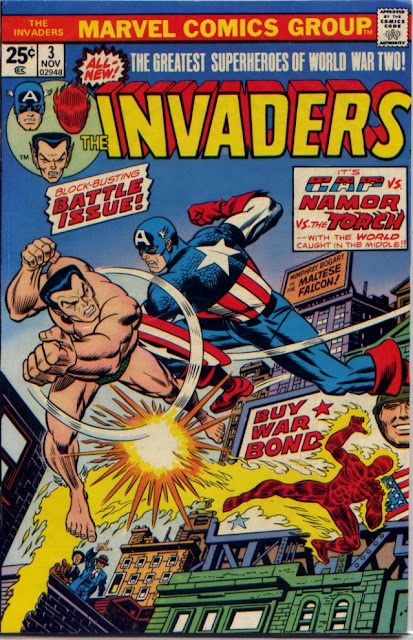 Along the way the Invaders (which was really a stupid name; it was never really explained why they used it) came across WWII versions of Thor, Frankenstein's Monster, the Liberty Legion (an American-based group of super-heroes mostly created at Timely during the actual era), and a living vampire. It was fun stuff, but I think the premise was inherently weak: how many times can we have super-heroes fight off "Ratzis" with any sense of drama? We know the Allies won the War, and we know these heroes (basically) survived. Plus, there were a few stories about such "high message" themes as racism, patriotism, and humanity, but they mostly seemed "dated" in ways the other, straight dramas didn't. 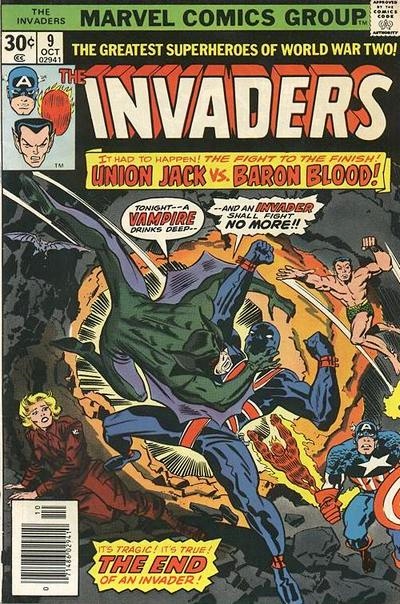 Two of the best story arcs in the series were the introduction of the new Union Jack and the debut of Baron Blood. Both involved the British nobleman Lord Falsworth and his family, and it is this drama that revolves around the War, instead of vice versa, that makes these two stories memorable. 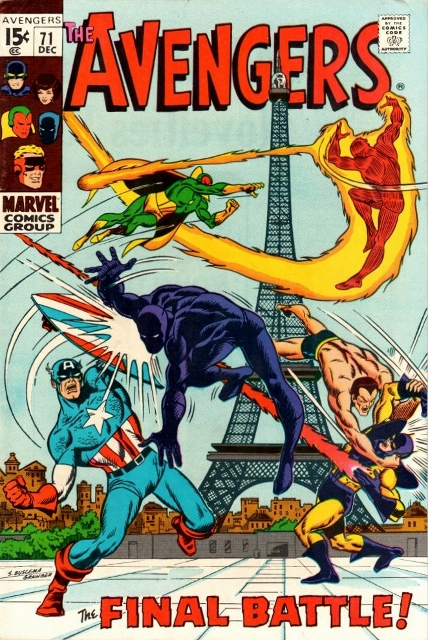 The story behind the story....in 1969 as part of an Avengers plot, writer Roy Thomas had three Avengers time-travel to meet Captain America, Namor, and the Human Torch during World War II. Roy became so fond of this throw-away idea of Timely's biggest heroes working together during the war that he wrote it up as a story-idea and it became The Invaders. Of course, after he left Marvel and went to DC he did the same thing with DC's Golden Age characters, creating the All Star Squadron. The series has been collected in four volumes, so if you think this stuff sounds fun, head over to your neighborhood library or comic-book store and check it out!