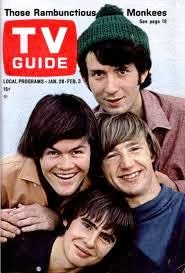 ...Continuing our Monkee Month, today is the anniversary of the very FIRST Monkees concert: December 3, 1966 in Honolulu, Hawaii.

When The Monkees premiered on TV in the fall of 1966, there were plans for NBC-TV's recording company, Screen Gems, to release their music. However, because the four leads were so busy actually filming the series, only the vocals belonged to them (and sometimes not even then; the background vocals were not always the boys). Famously, Glen Campbell was one of their initial guitarists.

However, as soon as they were making actual music, the critics started arguing that the band was "The Pre-Fab Four." To begin to "own" their own identities, the four began to practice every night after they had completed filming on the series. Because they had no actual shared musical history, the group went "Off Broadway" to debut their show; hence the trip to Honolulu.

The show was a huge success, and the surviving members are still touring to this day.

Heres' the last episode of their first season, The Monkees On Tour. There is some fun concert footage, from when the concert tour went to Phoenix.