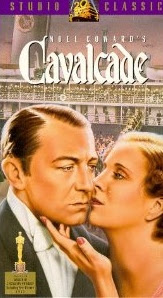 As I write this, Cavalcade has not yet been released on DVD in Region 1. Therefore I tracked down a video-cassette copy of it and had to watch that. It wasn't restored, the picture was crappy in certain spots, and the sound was uneven. However, I did get to watch it. (Oddly, Clive Brook has a mustache during the entire film. I'm not sure why he's shown clean-shaven on the video box!)

Similar to The Broadway Melody, I think Cavalcade happened to be the right film at the right place at the right time. I can't explain any other reason for it winning the Best Picture Academy Award! The story, for what it is, is simply a series of vignettes regarding the two main families as time passes them by. There is no character development whatsoever, and what drama does exist in the background never gets brought to the forefront. I think this is partly because of the different ways we tell stories compared to some 80-plus years ago, but let me try to give you a few examples of what I mean. 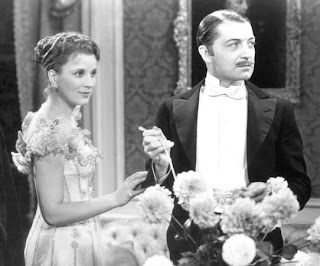 The film begins on New Years Eve 1899, at the beginning of The New Century. The music on the soundtrack is "Pomp and Circumstance." Similar to how people felt more recently on New Years Eve 1999, there is a pervasive sense of hope and joy everywhere. Jane and Robert Marryot and their in-house staff, Alfred and Ellen Bridges, prepare to toast the New Year. However, this is London and Great Britain is fighting The Boer War in South Africa, so the happiness is mixed with some melancholy. Robert and Alfred are preparing to depart soon to fight in the war, leaving their young children and wives to fend for themselves at home. Thus England rushes "head-long into the cavalcade of the 20th Century" (an actual line from the film). 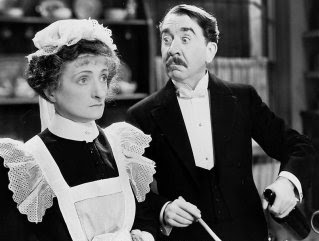 After the men have left, Jane's friend Margaret drags the sad and lonely Jane to the local musical theatre, and it is there during a performance of some Gilbert & Sullivan-like operetta everyone learns that the war is over. Fairly quickly after that scene the men come home unscathed.

Immediately after they return home, however, London marks the funeral of Queen Victoria (she died in 1901).

Next we see Alfred as the proprietor of a Pub, having used his savings as the Marryot's butler to open up a place of his own. Unfortunately, he is an alcoholic failure. When he runs into the street after his dancing daughter, he is run over by a Fire Truck and is killed.

Next we move on to 1909 where the Marryots meet with Ellen and the same dancing daughter,  (Fanny), who has just won a local dancing contest. This is where we see Burt from "Mary Poppins" sing, "Beside The Seaside." Oddly, there are no penguins. Then we learn that the Marryot's eldest son is in love with Margaret's daughter, and we then proceed to their honeymoon on the RMS Titanic. You can guess what happens next. 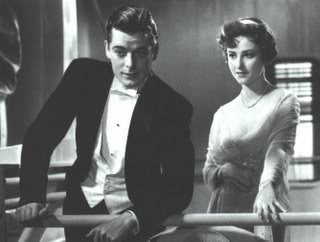 doomed lovers on the deck of Titanic
Next we switch to 1914 (we know these things because the dates flash up on the screen while a real cavalcade of knights and maidens ride through a valley, no subtlety here!) and if you know your history you know what's going to happen: WAR! Fanny dances at a nightclub/restaurant, and the Marryot's youngest son falls madly in love with her. We then have to endure a montage of war scenes as 1915, 1916, 1917, and 1918 flash by on the screen. Atleast twice I saw an image of a Christian cross that I guess is supposed to suggest that God was on the side of England. We see Fanny again and she says that although she is 18 and of age to marry, she can't marry Marryot. He goes back to war, either broken-hearted because  he knows she is right OR determined to win her when he gets back; we never find out which. He stops to see his father stationed in France, and the foreshadowing and sense of foreboding is overwhelming. Will the older veteran or the younger officer perish? You can probably guess. 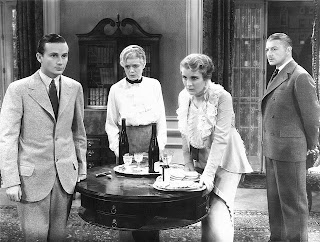 "It's WAR!" (World War One, that is....)
When we switch back to London to the mothers, Jane and Ellen, you just know something is going to happen. Ellen is visiting to talk to Jane about the possibility of her daughter Fanny being in love with their son, Joe. This is the scene where I expected some real drama: are the mothers going to argue class virtue? Is Jane going to forbid her son to marry a "common dance-hall girl"? Or is she going to symbolize the true cavalcade of civilization and begin to break down some of the walls between classes? We never find out, not only because the actresses both play the scene with an air of detachment, but because there is a telegram, and---you guessed it--- Joe is dead.

The last section of the film is all over the place. There is a musical montage of peaceniks, poison gas, liberal Marxists, church leaders praying for the masses, anti-church reactionaries, and the roaring Twenties as Fanny sings, "Twentieth Century Blues." Then we are in 1933 on New Years' Eve as Robert and Jane look back on their last thirty-three years. In their toast they say in part, "To England, dignity, greatness, and peace." The last image is the cross on St. Paul's Cathedral lighting the way into the future. The end. 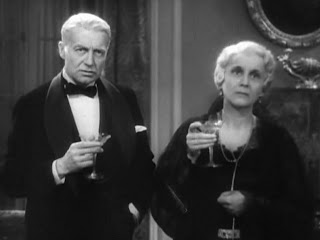 The actors, especially the younger ones, do an admirable job. Diana Wynyard as Jane and Clive Brook as Robert are sufficiently British upper-crust, which means I didn't really feel anything for them, haha. Wynyard has her best moments when she is worrying about her husband's fate during The Boer War. After that, she comes off as aloof and uncaring, which I hope she wasn't really going for. I have trouble relating to Ellen and Alfred, too, because both are mostly played for laughs. You might recognize Uno O'Connor (Ellen) as the "crazy village woman" from Frankenstein; I know that I did. And Herbert Mundin (Alfred) I had just seen in Mutiny On The Bounty (1935) which I saw before I saw him in this. Ursula Jeans as Fanny probably did the best job; I could never tell if her character  was sad for her life or for her station in life. Either way, she was excellent, and her scenes with Frank Lawton (Joe) really sparkled. It's a shame they didn't have more "meat" to the script, but I guess some things were just not talked about. (I was a bit surprised when Jane and Ellen are talking about their children and Jane asks point-blank, "MUST they....marry?" Ellen in a fit says, "Nothing like that, no! My Fanny is a good girl!")

One other casting note: investigating the cast I found that I knew one of them already! John Warburton, who played doomed son Edward, was familiar to me as a  Romulan on the Star Trek episode, "Balance of Terror," a role he had thirty years after this one.

Going in, I really hoped Cavalcade would have more of *that* type of drama, and so I was disappointed. As a time piece, however, it's worth the two hours to takes to watch it. This type of film may not have been done before, but it has been done better since.


this was labeled "trailer" on youtube but it looks like it is just the first four minutes of the film!


Also Nominated:
(in alphabetical order)
A Farewell To Arms
42nd Street
I Am A Fugitive From A Chain Gang
Lady For A Day
Little Women
Private Life of Henry VIII
She Done Him Wrong
Smiling Through
State Fair
I'm not sure why, but this year there was another expansion in nominated pictures, beating out 1932's then-record of eight with the new record of ten! Finally I am beginning to recognize some of these nominees, too: Little Women featured a young Katherine Hepburn; 42nd Street is the classic "go out there a dancer, come back a star!" musical (the only one here I've actually seen); She Done Him Wrong features Mae West and Cary Grant; and Henry VIII won its star, Charles Laughton, the Best Actor Oscar. A Farewell to Arms stars Helen Hayes and Gary Cooper, but I'm more familiar with the remake starring Rock Hudson and Jennifer Jones twenty years later.
Posted by Russell at 7:00 AM