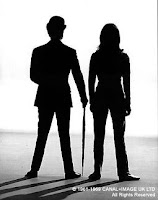 I can't remember when I first saw the TV show "The Avengers." It had to have been after 1974 because I remember already being familiar with the comic-book group with that name and being somewhat confused that THIS group had nothing to do with THAT group. (see this article if you aren't familiar with them.) I seem to recall watching the reruns on CBS on Friday (?) nights at 10:30 pm after our local news. Was this one of CBS' ways to try to battle Johnny Carson over on NBC? If so it worked, atleast at our house! I remember my Dad and I watched the show together. He had seen them when they were first run in the US in 1966-1969, but to me they were all brand new. I remember thinking that Patrick Macnee as John Steed was dapper, debonair, and dangerous. He was the kind of gentleman I wanted to grow up to be. And as for his female partners....what can I say? I grew up with huge crushes on three famous females: The Bionic Woman, Batgirl, and Emma Peel!

Mrs. Peel, as Steed always called her, was a "talented amateur" to Steed's professional. It was established that her husband had been a pilot who had been killed several years before. She was a scientist and a scholar as well as a black-belt in karate and an Olympic-level fencer. Often when Steed would investigate murders or radicals or mysterious incidents, he would do it as an official representative of Her Majesty's Secret Service. Meanwhile he would have Mrs. Peel planted as an undercover "spy," as a nurse or a secretary or dance teacher or what-have-you. Then, in the same manner as all of the best partners, they would work the case from two sides until they met in the middle, squeezing the bad guy in the process.
If you have never seen this show, I recommend you try to borrow a DVD from the library or watch some of the episodes on youtube or hulu because I simply can't explain just how GOOD Diana Rigg was. From the first time you see her you totally believe she is what she portrays: smart, sexy, self-confident, and willing and able to kick your ass if you try anything illegal, haha! In the color season especially her bright colored outfits (often dubbed Emma Peelers) and her beautiful auburn hair set many a male heart a-flutter. Even now, for men of a certain generation, if you talk of strong female archetypes you are certain to hear "Emma Peel-like" as a descriptive phrase. 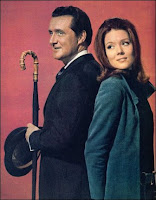 I've since read several books about "The Avengers" and have heard that Diana Rigg auditioned for the part of Mrs. Peel as a lark, never expecting to get the part. After she did, because she was not a house-hold name *until* "The Avengers," she was paid less than some of the stage crew/staff. In a huff (and rightly so!) she demanded more money and decided to quit after one more year. She has since said that if Patrick Macnee had stood up *with* her against the network bosses etc (he was a co-producer of the show) she would have stayed several more years. Ah, what might have been....!
Although I did not know it at the time, Emma Peel was not John Steed's first partner. I've never actually seen any of the first season (or "series," in British parlance), but at that time Steed's partner was Dr. Keel, played by Ian Hendry. After one year he was replaced by reluctant heroine Cathy Gale, played by Honor Blackman. I hadn't seen any of her episodes until *very* recently, but I knew who she was: Honor Blackman was the actress who played Pussy Galore in Goldfinger. My Dad was a huge spy fan (had you noticed?) and he took all of his kids with him to the James Bond movies.

The Avengers started off battling crime bosses, mad scientists, psychotics, and other spies. Their adversaries began to become more and more wild as The Sixties continued: they eventually faced such exotic problems as body-switching, "aliens," time travel, being shrunk, and memory-erasing drugs. It was during this last adventure, "The Forget-Me Knot," that Mrs. Peel said good-bye to Steed and quit being an Avenger. Her position was taken by Tara King, played by Linda Thorson. Tara, aka Tara-la-boom-dee-ay, was a professional spy like Steed, yet less a fighter than Emma. Whereas Mrs. Peel would gladly use karate, judo, or jiu-jitsu to take down an opponent, Tara was more likely to hit somebody with her purse or pull a gun. Linda Thorson was a lovely actress, but the characterization just wasn't right for the show's fans. After only one year with Tara, the show was cancelled.

Meanwhile Diana Rigg went on to make such movies as The Hospital, The Assassination Bureau, and, most notably, On Her Majesty's Secret Service, where her character ended up marrying James Bond! I always thought that if anybody would marry 007 it would have been Emma Peel, haha! Likewise, after "The Avengers" ended Patrick Macnee appeared as the new boss of UNCLE in the TV Move "The Return of the Man From UNCLE." He also appeared as James Bond's old friend in Roger Moore's last 007 picture, A View To A Kill.

In 1978 "The New Avengers" tried to recapture the magic, which come to think of it was probably one of the reasons CBS was showing the reruns. Patrick Macnee returned as Steed, now partnered with two other agents instead of one. However, JoAnna Lumley and Gareth Hunt were not attractive to the US audience, and the chemistry between the three leads was not as good as it had been between the two. The New Avengers, too, only lasted one year. In 1998 The Avengers movie was released. It starred Ralph Fiennes, Uma Thurman, and Sean Connery. It was a nice take on the Steed-Mrs. Peel adventures, but basically it was forgettable. It just goes to show that magic just can't be recreated once it's gone.

I leave you now with the famous theme song and closing credits from the Mrs. Peel era, written and performed by Mr. Laurie Johnson. This is the color version featuring Diana Rigg for the episode "Escape In Time," circa 1967.