After I discovered comic books in 1974 via The Justice League of America I went in search of other, similar examples of wonderment. I knew there were other DC books out there from the in-house ads. I soon came back around to MARVEL, too. AVENGERS #113 was the first Marvel book that I actually remember owning. There were others, for sure, before this: I distinctly remember the Spider-Man vs Mobius issue in SPIDERMAN #101, and I have a vague recollection of reading some CAPTAIN AMERICA & THE FALCON story where they face The Grey Gargoyle. But this issue, now....I liked it, and I kept it. Here's Captain America again, with Iron Man, The Vision, Scarlet Witch, the Black Panther, and Thor: six of Marvel's best characters, all in one book. I took an immediate liking to the first five, and tolerated Thor. In this issue they faced off against a racist group of suicide bombers wanting to stop the romance between a mutant and an android. Definitely not the subject matter appearing in JUSTICE LEAGUE, but fun none-the-less. I was hooked. 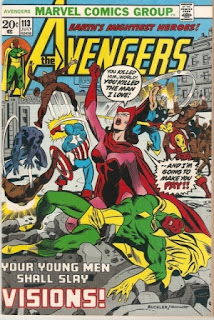 However, even though I loved this issue of THE AVENGERS, I didn't buy another issue until #125, more than a year later. Why? Well, I've read that Marvel was having trouble with their distribution company, so maybe that's why I never found another issue to buy. I know I could always find SPIDER-MAN and MARVEL TEAM-UP (which featured Spider-Man and various guest-stars, allowing me to try to figure out who was who and what was what in the Marvel Universe), but everything else seemed to be hit-or-miss, and for THE AVENGERS I was definitely missing. One more thing about Marvel team books. Their flagship title was FANTASTIC FOUR but at this point it was produced by very stable but not very exciting Ross Andru and Gerry Conway. Also it featured Medusa in place of the Invisible Girl. I was never a big fan of The Thing, so although I did buy an issue around this time, I didn't stay with it. I eventually would pick it up for about three years, though. 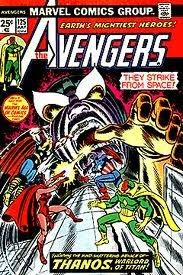 So I picked up #125 and if I had really liked #113, I positively loved #125. Not only were the same characters still around, but there were even more added to the mix. (Have I said I liked team books?) Besides Mantis and the Swordsman, Marvel's version of Captain Mar-vell (I always put the accent on the second syllable out of deference to Fawcett's original Captain Marvel) was leading the team against the cosmic villainy of Thanos, God of Death. And the art was by the super fantastic (but sadly one-time only) team of John Buscema and Dave Cockrum. After I read this issue, I *knew* I had to try to figure out the distribution schedule and find this book on a more regular basis. Long story short, I decided to subscribe. I had already made my commitment to JUSTICE LEAGUE and I thought I was ready for another title delivered right to my home.
Unfortunately, after I sent my check off to NY I must have mis-counted "6 to 8 weeks" for my first issue to arrive. I saw one then two then three issues on the stands and did not pick them up, thinking one of them would undoubtedly be waiting for me in my mailbox the next day. This was frustrating, to say the least, and eventually very annoying. FINALLY my subscription started with #135, a story that tied into GIANT SIZED AVENGERS for its conclusion. Given my random experiences with Marvel comics, I had no way of knowing of their fondness for cross-overs and continued stories; and although I knew #125 had continued in CAPTAIN MARVEL I was still not really ready or amused when a month later I got #136 and it had *nothing* to do with #135. In fact, it was a reprint of an AMAZING ADVENTURES story featuring The Beast vs Iron Man. If this was the way Marvel did things, then I was a committed DC man!!

Suffice it to say that the next few issues made me regret my decision to subscribe to THE AVENGERS. The characters I had liked were gone, replaced by nobodies like Yellowjacket, Moondragon, and The Beast.  The art by George Tuska was not the same as by John Buscema. After fighting some nobody bad-guy named The Toad they faced a Red Tornado spin-off (haha) named Whirlwind. Was this what I had missed!?!

And then I got AVENGERS #141. Captain America was back. The Vision and Scarlet Witch had returned from their honeymoon (!?) at the end of the previous issue, so now they were back, too. And more 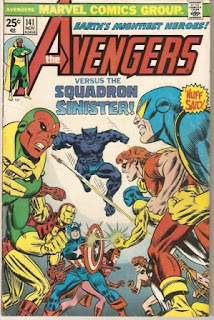 importantly for this story, the artist was some new guy named George Perez. He brought a fantastic and unique style with him to the book that I fell in love with immediately. THIS was The Avengers!! With this debut he became the main AVENGERS artist, off-and-on, for the next five years, until he left Marvel to move to DC and handle....yes...JUSTICE LEAGUE (as well as NEW TEEN TITANS and some mini-series called CRISIS).  He ushered in a new era with this story, bringing "Earth's Mightiest Heroes" back to the top of the Mavel chain. I was hooked (again) as the team split up, one group to face the JLA knock-offs The Squadron Sinister and one to go back in time and fight the Marvel version of The Time Lord called Kang. 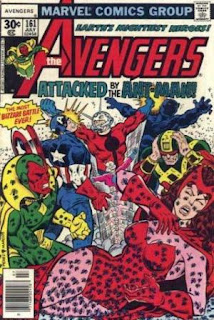 However, the chaos that seemed to surround THE AVENGERS (or was it Marvel itself?) never seemed very far behind. In the *middle* of this multi-parter there were two issues that had absolutely NOTHING to do with either storyline or with the continuity of the title. I learned years later that it was a GIANT SIZED AVENGERS story that had been cut in two to take up two issues of the norml monthly, so had been written without any thought to the continuity of the series. Then there was another reprint in #150. There were "guest artists" and "fill-ins" all over the place as the "permanent" creative teams played musical chairs. Still, most of the main characters stuck around, and most of the issues were entertaining. George Perez came back and left again. Then he came back and left (again). 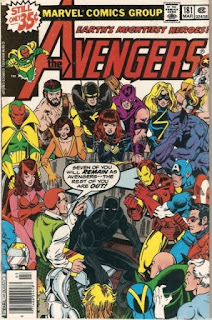 There was a run from #181 through to about #200 that was another good series of issues, with art by John Byrne. During this time the US government took over the administration of the group, and because the US followed Affirmative Action programs, the Avengers had to, too. In a controversial storyline, Afro-American super-hero The Falcon is *made* to join to fill a quota. He was not enthusiastic about it, but as a long-time fan of the character, I enjoyed his inclusion. He stayed until the US government administration ended, although he has come back now and again.

After George Perez left Marvel and Jim Shooter took over Marvel in a huge way, I dropped all of my Marvel books. By this point She-Hulk, Ms Marvel, a new Captain Marvel, the Sub-Mariner, and Tigra had joined (and quit) the Avengers. When Marvel took The Vision apart (he's an android) and made Scarlet 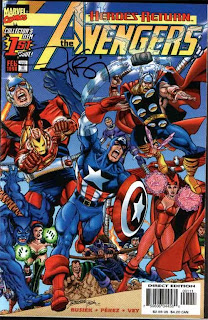 Witch insane, I quit. Although I was in Japan at the time and didn't follow most of the comics at the time, it looks like most comics in the 90s were not very good. I did try to go back to Marvel in the early 90s with THE WEST COAST AVENGERS but that wasn't very much fun, either. Then or the Avengers was relaunched in 1998 by Kurt Busiek and, yes, George Perez. Also along for the ride were ALL 39 past-and-near Avengers, which made it fun. These two gentlemen obviously loved the Avengers as much as I had, and the care they took in crafting their stories made THE AVENGERS the best book on the stands again. For another four years, this series was awesome.

Now Marvel and The Avengers are back in a dark place. Scarlet Witch went insane again and created her own dimension (aka House of M). Then she died but took several Avengers with her. Spider-Man and Wolverine as well as Power Man and other characters who had never been Avengers before joined up. There was a huge Civil War. Cap and Iron Man fought each other. Cap was killed (but got better). Can you figure out yet that I'm not reading this book (again)?

For now, I'm watching from the sidelines. I am hopeful that "my" Avengers will return, and once more the mightiest heroes on Earth will head into battle with their exciting mantra, "AVENGERS ASSEMBLE!!" 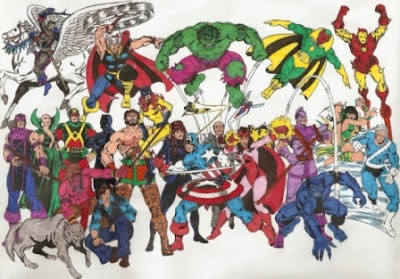 (click on the above to super-size it; art by George Perez, colors by yours truly)
Posted by Russell at 6:44 AM