I don't remember a time when I didn't know who The Beatles were. In my house we had the one stereo (aka Record Player) and next to it were all the various albums belonging to the people who lived there with me: my two sisters, my brother, and my parents. (Being the youngest, at this point I didn't have any albums of my own.) From a very young age I would look at the album covers because I wasn't allowed to play the records for fear of scratching them. We had The Red Album and The Blue Album. Before I even listened to them (or knew what they sounded like) I was attracted to the design: same pose, same building, several years apart: what a cool idea! 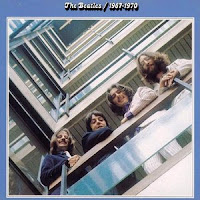 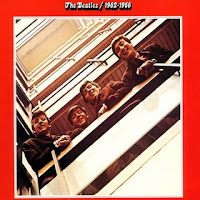 Of course, I soon realized that this group was the same one I was hearing on the radio all the time (I think "Hey Jude" was the first Beatles song I remember knowing). So I knew who The Beatles were (and what they sounded like) pretty early. While I was growing up it seemed like they were everywhere: Paul McCartney sang "Live and Let Die" and "Band On The Run," Ringo Starr was on the radio with "Photograph" and other hits, and the band itself was mentioned on Saturday Night Live almost every other week. As I got older, I learned to recognize super-hits like "All You Need Is Love" and ""She Loves You," as well as more obscure songs like "Helter Skelter" (which to this day I simply can't listen to!) and "Sgt Pepper's Lonely Hearts Club Band." And of course, I was only 16 when John Lennon was murdered, leading to the subsequent huge increase in "Beatlemania." This also led to George Harrison returning to the world stage.

I think because the Red and Blue "greatest hits" albums were my first introduction to most of their songs, it has always been easy for me to think of them in terms of "Early Beatles" and "Later Beatles." There were so many Beatles songs that I would be hard pressed to pick one "era" over the other; for every "Revolution" there was a "Please Please Me;" for every "We Can Work It Out" there is a "Penny Lane." 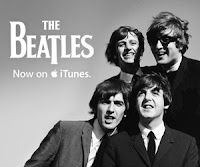 However if I had to pick only one of these albums to listen to from now on, though, I think I would have to pick The Red Album. Not only do they seem better/sharper/more focused, but there are more collaborations between Lennon and McCartney instead of solo efforts, and they are *fresh.* There is just so much joy and happiness in their early hits, like "I Saw Her Standing There" and "Twist and Shout." Even songs like "PS I Love You" that are supposedly sad are so bouncy (for lack of a better term). If you want to really understand just how great the early Beatles songs are, think of their context. In the weeks before The Beatles hit the US singles charts, these were some of the biggest hits in America:  "Sugar Shack" (Jimmy Glimmer), "I'm Leaving It Up To You" (Dale & Grace), "Deep Purple" (Nino & April), "Dominique" (The Singing Nun), "There! I've Said It Again" (Bobby Vinton), and "My Boyfriend's Back" (The Angels). In this group, "I Want To Hold Your Hand" must have been literally a breath of fresh air! 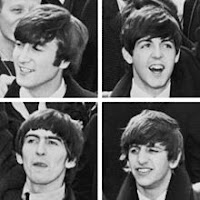 The Beatles, for several reasons, were a phenomenon that no one has ever been able to replicate. There has never been any other group, musical or otherwise, like them. The newest Justin Bieber or Hannah Montana are nothing like the popularity that The Fab Four had to deal with. Think about it: How many other rock-and-roll bands are there where the majority of people can name all the members? John, Paul, George, and Ringo...you don't even need their last names. When they burst onto the scene they were still trying to fit into the "band uniform" characterizations, but by the end of their professional life together they had become four indidvidual musicians. Just look at the two photos above and below this paragraph for proof. 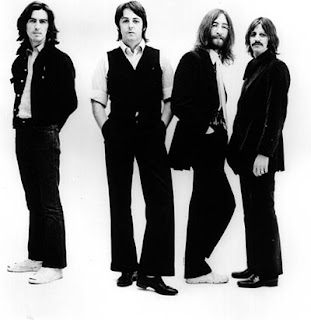 I think it was Paul who said the reason they were so successful was just because they were a hell of a good rock and roll band. That they were. And so, so much more.

I leave you now with one of my all-time favorite Beatles' songs, "HELP!"

Email ThisBlogThis!Share to TwitterShare to FacebookShare to Pinterest
Labels: Music Monday, The Beatles