Walt Kelly celebrated Veterans Day (aka Armistice Day) in his strip POGO on November 11 every year. I'm not sure why he felt so strongly about this day, as according to the biographical information I have read about him he was not himself a veteran. Perhaps because of this, he was either super-patriotic himself OR eternally grateful and humble about those who did serve in the Armed Forces. I don't know for sure, but as someone who never served in the Armed Services myself, I can guess that it is a little bit of both.

So to honor all soldiers, here's a reprint of the 1949 Veterans' Day strip.

"All gave some; Some gave all." 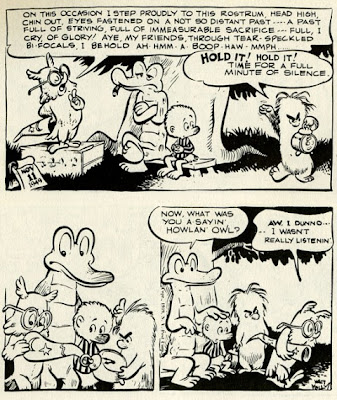 Email ThisBlogThis!Share to TwitterShare to FacebookShare to Pinterest
Labels: Pogo