It is with a heavy heart that I announce the passing of my beloved 2001 Civic LX automobile, affectionately called "Carson." Carson was involved in an accident on September 25 when an idiot drove through a red light and hit him on his left front side. He deployed his airbags, saving my daughter from any serious injury. However, the same couldn't be said about Carson. The insurance auditor took a look at him and declared him (sob) "totalled." Although we held out hope for his recovery, the death notice came this past week with the insurance company's official report.

I purchased Carson from the Honda dealer in Muncie on McGalliard road in August, 2001 as soon as I had returned to the States. Through ten years and numerous trips to St. Louis, Chicago, and then back to Indiana from Columbus, Carson drove us in, well not really "style," but in guaranteed quality. Thank you, Carson, for 10 wonderful years. You got a flat tire once, slipped off ice, got dinged with bee-bee gun pellets, slipped ON ice, drove through a blizzard, and got rear-ended (twice!). Under your little Civic hood beat the soul of a truck. Good-bye, old friend! 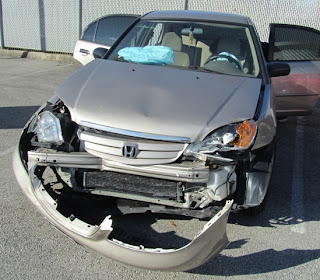 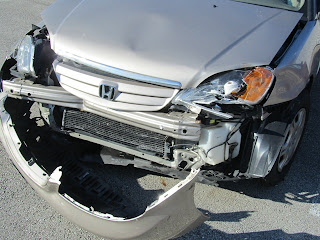 Email ThisBlogThis!Share to TwitterShare to FacebookShare to Pinterest
Labels: My Favorite Things, Opinions