Note: "Russell's Ken-Bun-Ki" is a series of articles I wrote for my Japanese City Hall newsletter back in 1996-97. They were articles about life in America or life in Japan as experienced by an American. This one is from January 16, 1997.

Yesterday (Jan 15) was Adult Day (also translated as "Coming of Age Day."). There was a ceremony at our Aya Town Cultural Hall for all of the people who had turned 20 in the past year. For all of those people who were officially recognized, congratulations for becoming bright and healthy adults.
In America we do not have any holiday similar to "Adult Day." When people legally become adults in the USA, those people celebrate with a birthday party with their family or go out with friends for their first legal beer. It is a totally private celebration. At restaurants and bars all young people have to show identification when they want to order alcohol. Adults who look younger than 21 absolutely have to show their drivers' license to prove their age or shops will not sell them alcohol. Also, in the US there are no vending machines that sell cigarettes or beer, so under-aged people cannot purchase these items on their own. It is against the law to do so. When I first came to Japan and first saw beer and cigarette vending machines I was very surprised.
In America the legal age to become an adult is 21 (not 20 like it is in Japan). In the 1980s several states had separate ages for purchasing alcohol, but in order to combat drunk driving on the national level the legal age was made 21 in every state.

How do you suppose I spent my "adult" birthday? In the fall of 1985, I was an exchange student at Miyagi University of Education. I was living in the boys' dorm. We had weekly cleaning duties for all the boys, with hallways and toilet duties etc switching between blocks every week. The cafeteria and bath (tub) rooms were huge efforts, and they were switched out monthly. Well, on my 21st birthday I ended up cleaning tubs in my boys' dormitory. As an American I couldn't imagine a more bizarre way to spend my special day. It made such an impression on me that I still remember it to this day. 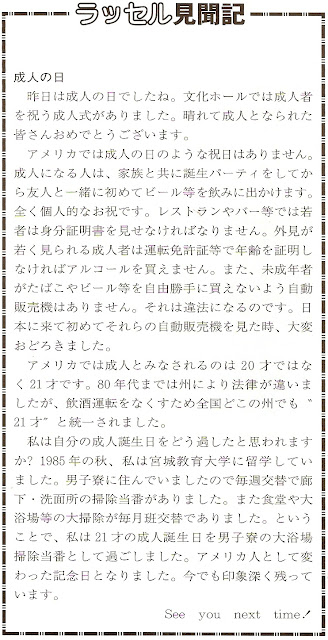 Post-Script
"Adult Day" is the one Japanese holiday that I never really understood. Every year I asked the City Hall employees I worked with (I was in the Educational Department, the group that organized the event) to try to explain it to me; nobody ever could. It was just another milestone for the average Japanese person: there was a Childrens' Day (May 5) and a Respect For the Aged Day (Sept 15) so I guess it made sense to have something in the  middle, too.
The ceremony itself was basically the same no matter where you were in Japan. Our Mayor and other dignitaries would make speeches, he would hand each "adult" a certificate (similar to a high school or college diploma), one of the "adults" would make an answer-speech, and then there would be a group photo. That was basically it, and I participated for 15 times; it never varied. The "adults" would dress up in kimono or suits, and it was true that they would all "clean up real good." Then they would mostly go out and get drunk. And because most of them were in college or spread out away from their hometowns, it was a defacto "reunion" paid for by the state.
My daughter participated in her ceremony last year. Since I didn't ever give it any emotional value, it was even more bizarre for me to be in the audience as she was "recognized" by the Mayor.
As an added bonus, here is the group photo from my daughter's Adult Day Ceremony, January 2012. That is the Mayor in the middle of the five old men. The banner says, "Congratulations, New Adults!" 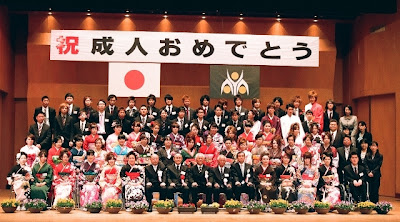