I suppose I should go through the various source materials this time.
The Batman story was one of those "Two Minute Mysteries" that appeared as back-ups in BATMAN and DETECTIVE for a few years. This one featured Commissioner Gordon, I believe, who I obviously made into Batman to fit my purposes. Story I believe was by Bob Rozakis and Joe Staton. I don't have an issue number, I'm sorry.
The Black Canary story was from DETECTIVE #464 in a story featuring The Calculator. I switched in Heat Wave (he had appeared in The Flash's dream sequence in JL #14) but left the story basically intact. Story was by Bob Rozakis and Mike Grell.
The Martian Manhunter story was the one I changed the most, as it was originally a Superman story from ACTION #456. I took the main combat sequence of that story and switched in J'onn. Otherwise it's the same story, by Elliot S. Maggin and Curt Swan.
The Aquaman story was from ADVENTURE #437 by Paul Levitz and Mike Grell. This was a simplified version with the basic story intact, although in the original version Black Manta gets away.
The Green Lantern story was by Paul Kupperberg and Joe Staton, but I can't remember where it came from. The space aliens bit was longer, and the drama with the space ship occupant was longer, but the gist is the same. Except I switched Hal Jordan out for John Stewart.
The Green Arrow story was another Bob Rozakis Calculator story, this one from DETECTIVE #466. This time I made The Calculator into Dr. Alchemy, a villain that had been established in both JL #14 as well as in JL #21 as one of The Crime Champions. The art in the original is by Marshall Rogers.

As for other things....this is the first (and only) appearance of Detective Bullock in my universe. I never got around to featuring Commissioner Gordon or Chief O'Hara in my JLA stories, but I featured Bullock. Go figure. He's never addressed by name in the story, but his translated Japanese lines under the "screen" call him out. (see below) 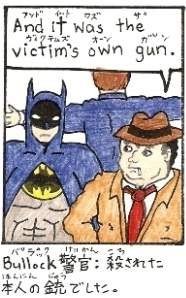 I used three of my friends' names as the suspects in this story. There really is a Susan Dreyer and Don Farnsworth, and I have a friend named Helaine...Henning. I didn't want to use "Henning" because she turns out to be the murderer, and I thought that would have been rude, haha. By the way, I was playing around here, because in real life Susie is white and Helaine is black, so I switched them. :-) 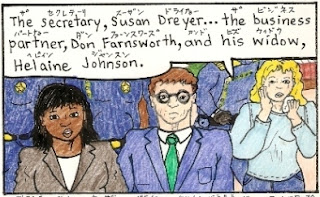 In case you don't have your handy Celsius-Fahrenheit converter, the following temperatures in Fahrenheit are: 120, 128, 115, and 103. Earlier when Black Canary notices the temperature it says 37 C; that's 99 F. By the way, I wanted to express in color that the temperature went up, spiked, and then was starting to come down, but the variations of red didn't really work here. Did like that Dinah appears in the last two panels before the big pay-off in the next scene, though. 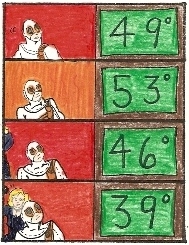 Maybe I'm a product of the Seventies when JAWS scared so many of us, but there is just something about sharks that still scares the hell outta me. This panel, where The Shark basically tells J'onn that he's about to eat him just works for me. Brrr! 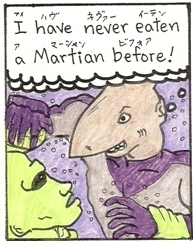 I really liked this view of the inside of Black Manta's ship. I liked that he's above his crew and that he can see out, probably in a type of panoramic view. I thought I did a good job with this. 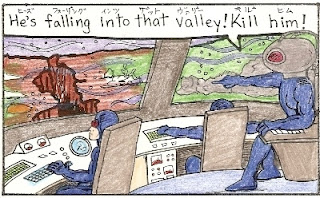 Two things I really liked about this picture: first, I liked that we could see inside Black Manta's helmet. We never had seen that before here and it shows that the guy inside really was there and was human. Can you imagine wearing that type of helmet by choice? The second thing I liked was the smaller font for his dialogue; this was meant to imply that he was whispering or talking to himself. If you were to try to kill one of the JLAers and then realized that you had failed and that he was coming after you....I think I would be all "Uh-oh!" too. 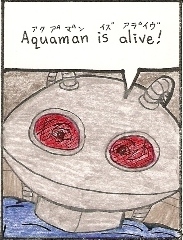 This story features a spaceship from the classic TV adventure series LOST in SPACE. Anybody recognize the Jupiter 2? The alien inside also resembled somewhat the arms of the LiS Robot. I liked doing this sort of thing, especially since I knew the kids reading this would have no idea what I was doing. 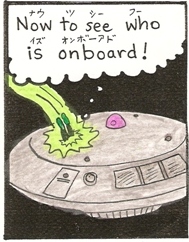 Green Arrow I think in one of the actual JLA adventures says something to this affect to Felix Faust or somewhat similar. I liked that idea: if you're an archer and you basically don't have any alien foes you would prefer your adversaries to be crazies or mad scientists, right? Magic and/or sorcery would just be a major pain, I think. I thought this was a great character bit for Green Arrow. 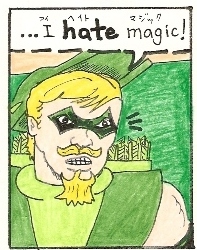 As I mentioned in the FORWARD, I originally had intended to do several solo stories of these characters when I first started doing these bilingual comics. However, the time and effort necessary to do them made it difficult; if I was going to create comics at all, it made more sense to include all the characters so that all the kids' favorites would be included. At this point it was a distinct possibility that my time in Japan would be ending soon, so I wanted to do something different. Some of the art doesn't hold up (I especially wish I had done a better job on the Black Canary and Martian Manhunter chapters) and some of the stories seemed rushed due to space considerations, but overall I thought this was a good, fun issue.
Posted by Russell at 7:00 AM