The End of The Civil War (F Troop)

The US Civil War ended on April 9, 1865 when General Robert E. Lee, representing the Army of the Confederate States of America, surrendered to General Ulysses S. Grant of the United States Army. I'm happy to say that one hundred and fifty-eight years later the countries have mostly come back together. Periodically there are ripples of misunderstanding or animosity, but mostly The Civil War is seen as an anomaly that the States had to get through in order to become a stronger, United country. 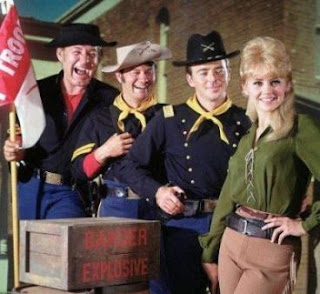 When I was a child the strongest image I had of the Civil War was the blue-jacketed cavalry portrayed on the television comedy, F Troop. I know the show itself had nothing to do with the Civil War; still, there were Eastern, Western, and Southern soldiers portrayed on the show, so subconsciously it was bringing the Civil War veterans together. I wish there had been some black characters on the show; that would have been awesome. As it was, the theme of the first season did start this way:

The end of the Civil War was near when quite accidentally
A hero who sneezed abruptly seized retreat and reversed it to victory.
(music/lyrics by William Lava & Irving Taylor)

F Troop premiered in 1965 at what turned out to be the end of the Western Boom that had overwhelmed television for more than ten years. Warner Bros, who produced F Troop, had a standing fort set from their movie back-lot and decided to re-christen it "Fort Courage" in order to lampoon the Western genre. With that in the mind, the first season theme song painted a pretty picture: "...where pale face and red skin both turn chicken!"

Forrest Tucker, best known as Rosalind Russell's rich boyfriend in Auntie Mame, played Sergeant O'Rourke. He was an entrepreneur in US Army clothing; he was the owner of O'Rourke Enterprises, which not only secretly owned the town saloon but also sold the Indian souvenirs that the Hekawis made on consignment. He was humorously supported in his adventures by Corporal Agarn, his none-too-quick side-kick with a heart of gold, portrayed by Larry Storch. This was stand-up comedian Storch's first big break on television, and he clearly was enjoying himself. Their capitalist partner was Chief Wild Eagle of the peaceful Hekawis. The Hekawis wanted to maintain the peace treaty with the US government not only for the profits of working with O'Rourke Enterprises, but also because this tribe was made up of cowards. Wild Eagle  was played by veteran performer Frank De Kova, made-up to look like a Native American. Into this capitalist paradise came young and by-the-book Captain Wilton Parmenter, played with friendly enthusiasm by Ken Berry. Immediately upon his arrival at Fort Courage he was set upon by Wrangler Jane, played by Melody Patterson. They made a cute couple, and part of the charm of the series was the chemistry between them.

F Troop only lasted two years. During that time Berry was able to instill such wide-eyed innocence in the role of Parmenter that O'Rourke and Agarn started to become more friendly towards him; their initial relationship based on deceit and duplicity (i.e. their greed) gave way to grudging respect and affection. In fact, in one of the last episodes when the Captain may be transferred away because of a promotion, all of the troopers seem genuinely upset that he will be leaving.

One other fun thing about F Troop: the three leads were so talented that each of them were double-casted at least once during the run of the show. For example, Ken Berry also played "The Kid," a vicious bank robber; Forrest Tucker played Morgan O'Rourke's father; and Larry Storch played several of Corporal Agarn's cousins. Besides this double-casting, the show also boasted great guest-stars. Edward Everett Horton, Paul Lynde, Vincent Price, Charlie Weaver, Harvey Korman, Phil Harris, and  Jamie Farr all guest-starred on the show.

So to celebrate the end of the Civil War and  unsung television comedy, here are the two opening themes of F Troop. When they went to color for the second season, they re-did the opening. Unfortunately, although I think the graphics are fun and Frank De Kova earned a co-star billing, we did lose the lyrics. Still, I do like them both.
By the way, is it just me or does the season one theme sound like it was sung by The Statler Brothers?