To mark National Library Week, this week I am writing about some of my favorite books in my chosen topics: Monday Music, TV Tuesday, Wednesday Comics, and Film Fridays. Today being Friday, it's time to wrap this week up with some talk about Hollywood!
TARZAN of the Movies by Gabe Essoe
I remember reading this book back in the 70s when I was confused as to whether Tarzan was "really" Johnny Weismuller or Ron Ely. Since that time, even with all of the additional Tarzans (most famously one from Walt Disney; who thought *that* would ever happen?), this book still seems to be the best explanation of how & why Edgar Rice Burroughs' creation made it to the screen. 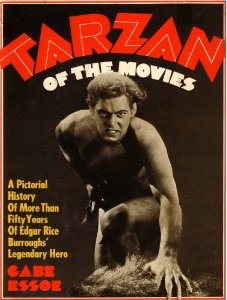 And you gotta love the title: it's a "play" on the old Tarzan books and movies themselves, and actually represents truthfully what this "new" character was: none of them were "faithful" to the book, but that didn't necessarily make them bad. And by the way, if you have never seen any Johnny Weismuller Tarzan movies, I suggest the second one, I want to say (from memory) that it is "Tarzan And His Mate" but I could be wrong. The first one is good, but the second one is where he and Maureen O'Sullivan (Mia Farrow's mother) really hit their stride.
The Thin Man by Dashiell Hammett
This is not a book about the movie (or the book) but the novel itself. It was published in January 1934, mere months before the movie of the same name came out featuring William Powell and Myrna Loy. By this time Dashieel Hammett was already working in Hollywood as a screenwriter and he sold the option of the story before it was actually published. Because of the close timing of the publication of the book and the release of the movie, the characters are almost indelibly linked to Powell and Loy. I read the book long after I had seen most of the movies in the series, so in my mind while I was reading this I was seeing and hearing Powell and Loy. It's a grand "novelization" of the story and a heckuva mystery, to boot.

That thin man on the cover? It's Dashiell Hammett himself, who unfortunately never wrote another book. He died within a few years of this being published.
BUGS BUNNY: 50 Years And Only One Grey Hare
Who doesn't love Bugs Bunny? As a kid there were two schools: Mickey Mouse Fans, and Bugs Bunny fans. I was always a Bugs man.
This book explains his (rather convoluted) origins as well as his Academy Award-winning film history and then his re-emergence on television. My favorite section is the one about all of his various adversaries. I always liked Elmer Fudd more than I liked Yosemite Sam, but I do admit that Sam as a pirate or politician or a shiek was pretty funny. My favorite was Wile E. Coyote, guest-starring on leave from a Road Runner cartoon, and the mountain lion with the lisp. And the Tazmanian Devil, of course. 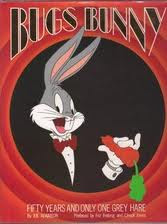 The Wizard of OZ
The Official 50th Anniversary Pictorial History
I have read an actual book about the making of the picture, but the details and factoids threaten to drown the wonder and magic. This book, on the other hand, is the perfect mix of facts (Buddy Ebsen was going to be the Scarecrow, then switched to the Tin Man but was allergic to the silver makeup; it almost killed him) and photos. Am I aging myself by pointing out that this is the 50th anniversary edition, and yet there is now a 75th anniversary edition out? Gee whillikers! 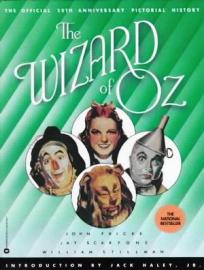 2004 Movie & Video Guide by Leonard Maltin
My friend Greg gave this to me a few years ago and I have used it ever since to mostly research movies I have never heard of! "Marie Antoinnette" starring Norma Shearer? Check. The films of Sidney Poitier? Check. The minutiae available can be mind-boggling, but on the other hand you open this up and you can lose yourself reading about all sorts of movies you never knew existed.

The Academy Awards: Special Commemorative Edition
This is a book I happened upon during a trip back to Japan. It features two or four pages on every Academy Award year from the first (1928) through 2003. It also features the nominees and other notable winners like songs and the Japanese films that won Best Foreign Film. Of course, it's all in Japanese, too, so I can tell you such bits of trivia as "The Runner On Fire" is the Japanese title for "Chariots of Fire."  It's a well-organized and easy-to-read book (easy for me, anyway, haha) with plenty of photos and all the information that I could possibly need in chronological order. 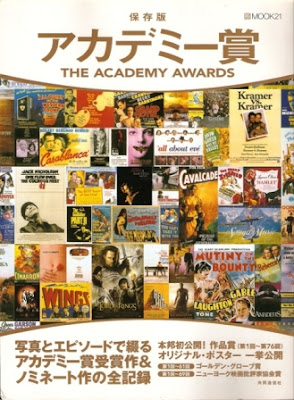