This issue I did something I hadn't done before and never did again: I presented solo adventures of six members in lieu of one adventure featuring six members. When I first started this series back in 1991 I wanted to balance out the main JLA comic with individual's stories. Unfortunately, I didn't have the time to do this. So although I did do one Wonder Woman solo story (which I might upload here after this series is finished) I didn't get to the Green Lantern, Aquaman, or Batman stories I had tentatively planned. Of course, this whole thing started with individual Batman stories, so in that sense I went full circle.

In order to create this issue I went to back-up stories and mini-stories from the backs of such actual DC comics as ADVENTURE, DETECTIVE, and ACTION. I'll explain more of my choices in the Afterward. I will tease you and say that of the six members I use here, only one had to be changed from the original source material. In other words, five of the six heroes I used here had *actual* stories published in some DC comic; the odd-man out I had to change character X to character Y. Old-time fans will know almost immediately....but for newer comic book fans you might not recognize the tell-tale clue, and I sure as heck aren't going to point it out. :-)

This issue was reviewed by my favorite translation assistants, Yamamura-san and Saito-kun. By this time we had a definite give and take between us; I knew what they knew, and they knew what I knew (or more importantly, what I didn't know.) Translation was a painless part of the process by now, and that is another reason that I remember these issues so fondly.

The one point I stressed out about was the title for this issue. I went back and forth on "A Day In The Life" until I finally decided it was okay. It was nowhere near as exciting as I hoped, but it was the best we could come up with. By the way, the actual literal translation of the title is "What happened on one particular day." 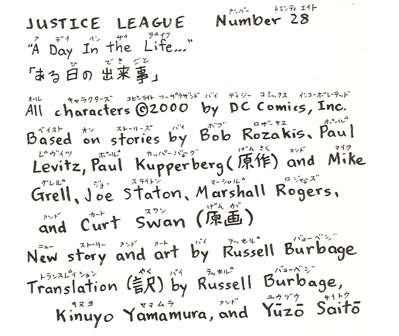