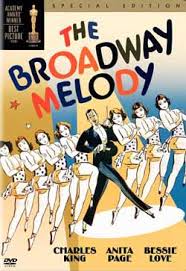 Before I actually found a copy of The Broadway Melody to review, I saw bits of it on youtube. It looked like it was to Movie Musicals what Wings and All Quiet On The Western Front were to World War I and Cimarron will be to Westerns: epics in new genres that received the honor of the Award because they were in the right place at the right time, and not because they were necessarily great movies in their own right.

I was prepared to write just a few words here as a "space-holder" until I finally did track down a copy of the movie. Well, my library managed to find me a copy this past week! So although I have written reviews for the first few Best Pictures already, I had to scramble to watch this yesterday (6-1-13) to get this review written to meet deadline! Basically....I stand by my initial "gut" reaction written above. 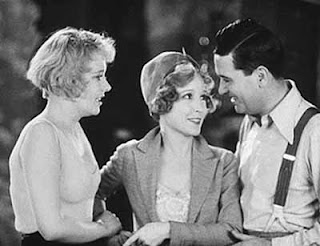 I am sorry to say that the second time out we have a winner. Or, more precisely, a loser. I *just* finished watching this movie and I can not think of one thing that made this a "best" of anything.

I like the song "Broadway Melody." I knew it from Singin' In The Rain, where Gene Kelly sings in during his "Broadway Revue" bit. It's a catchy tune, but....the first time it was good. The second time they use it, when King sings it again to Page and Love was a bit much. The third time when a whole chorus dances around King as he sings it....well, by the time they were playing it as background music I was frankly sick of the tune! In fact, I always thought "Broadway Melody" was just a song; I didn't realize until I started this series that it was also a movie. In fact, it's a series of movies: The Broadway Melody of 1936, The Broadway Melody of 1938, and The Broadway Melody of 1940 are just three in the series! I wonder if the same song was used in all of them? Probably.

Here's the story in a nutshell: Charles King is a George M. Cohan lead/songwriter character "Eddie" who is in love with Bessie Love as "Hank." (Don't ask me why she's called Hank. Were girls ever called "Hank" before?) Hank and her younger sister "Queenie" (great names their parents gave them) are a semi-successful song-and-dance team in the West/Mid-West, but now they are in New York to become stars on Broadway. Queenie is played by Anita Page as beautiful but stupid....maybe. Although Eddie in engaged to Hank, he begins to fall in love with Queenie. Queenie is the beauty and gets noticed by disreputable producer who buys her jewelry and, eventually, an apartment of her own. Hank and Eddie try to stop Queenie from becoming a kept woman, but Queenie is doing all of this to help her sister and their act because nobody likes Hank *and* to stay away from Eddie. Hank eventually realizes Eddie loves Queenie, so she gives him up. Eventually Eddie marries Queenie and Hank goes back on "the circuit" because, well, because "she's a real trouper." The End. 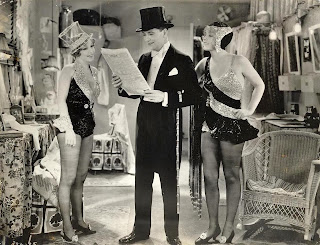 I don't know where to begin to try to explain to you just how stupid this movie is. Shall I start with the sisters' agent, their Uncle Jed, who stutters for comedic effect? He's like a real-life Porky Pig! Later, the sisters' act is put into a Revue only to get cut because it was too long, (and really, how many times do we have to listen to "Broadway Melody," anyway?) Simultaneously a goddess (or something?) in the next song falls off her perch and the producers need a beautiful blonde STAT. They pick Queenie, and she manages to stand during the song I could not understand. Suddenly, she is the hottest thing on Broadway: because she stood on stage in a wig and a bathing suit!?! Later, Eddie sings another song I know from Singin' In The Rain, "You Were Meant For Me," but instead of singing it to his fiancée, he sings it to....you guessed it, Queenie. I have never watched a movie and cried out to the screen, "No! No!" until now.

There are a few other Arthur Freed & Nacio Herb Brown songs, such as a wildly odd "Wedding of The Painted Doll" but seriously, if you want to know about Broadway Revues I would suggest 42nd Street and if you want to know about this era of Hollywood I would recommend Singin' In The Rain. For a movie that I had trouble tracking down and actually looked forward to seeing, I was extremely disappointed. 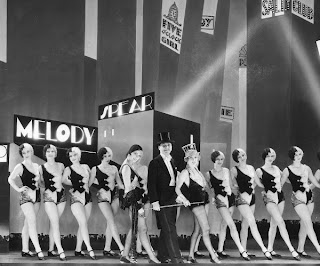 
Also Nominated:
(in alphabetical order)
Alibi
Hollywood Revue of 1929
In Old Arizona
The Patriot
This is the second time in a row that I have to admit that I've never even heard of any of these other nominees. Warner Baxter won Best Actor for In Old Arizona portraying The Cisco Kid, a character I have heard of but never seen. He did not portray the character from TV that I am familiar with, though; that was Duncan Renaldo.
Posted by Russell at 7:00 AM