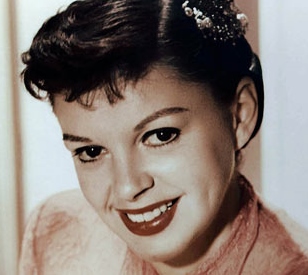 Frances Gumm was born on June 10, 1922. "Judy Garland" was a name she chose when she was still in the vaudeville circuit with her sisters as The Gumm Sisters. By the time she signed with MGM in 1935 she was known as Judy Garland.

We all know Judy Garland from The Wonderful Wizard of OZ. It's a classic performance in a classic film. However, she recorded for years, first on Decca records while under contract with MGM and then later for Capitol Records. She had numerous musical hits from her films, among them "You Made Me Love You," "Over the Rainbow," The Trolley Song, " "On The Atcheson, Topeka, and the Santa Fe," and my all-time favorite Christmas song, "Have Yourself A Merry Little Christmas."

I will always love "Over The Rainbow," but for sheer HAPPY there's no beating her 1950 hit from her last MGM musical, Summer Stock, "Come On, Get Happy." If only she could have.

Judy Garland was nominated for two Academy Awards but didn't win. Her only accolade from The Academy was Best Young Performer in 1940 for OZ.