So what did you think? Can you sort of see why I think this is one of my favorites?

This issue was based on the story from JUSTICE LEAGUE 160 which featured these eight super-heroes. You can recognize Superman, the Flash, Elongated Man, and Wonder Woman.  I switched Martian Manhunter for Hawkman, Black Canary for The Huntress (under WW), Green Lantern for Star-Spangled Kid (2nd from bottom), and Red Tornado for Dr. Mid-Nite (bottom right). My characters are actually "stronger" but Ralph Dibny ended up being the last member standing in each story. 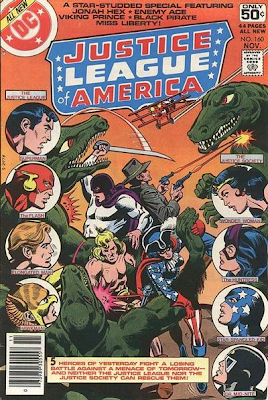 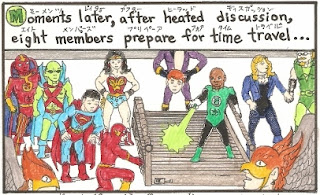 I can only imagine how heated that conversation must have gotten, especially since Green Arrow was the first member (with Black Canary) to meet up with The Time Lord in the first place.

The one thing I didn't really like about my adaptation of this script, though, is that I didn't let Ralph actually save the day. In JLA 160 he stops the Time Lord and is rescued by Aquaman (yeah!). However because I added the bit at the JLA satellite, I couldn't let Ralph capture him. Sorry, Elongated Man!! 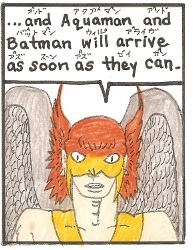 Speaking of Aquaman, I liked how I had him and Batman show up late to the meeting. I think if you're a full time super-hero, you just sometimes are late to things. You just can't help it! 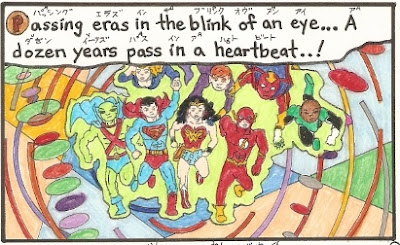 I really liked what I did with colors and designs in this story. There isn't any rhyme or reason to the images, but it seems psychedelic enough to represent time travel. I also like how you can see each of the members is in touch with somebody who is travelling at super-speed. Poor Black Canary, I bet she almost got her hand ripped off, haha! 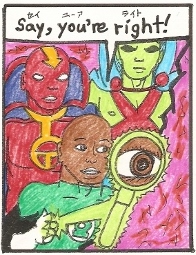 I really like this panel.
It followed a scene where Red Tornado says, "You are mistaken." I tried very hard to make Red into a "robotic" character, and tried to use words and phrases that sounded "right" to him.

I also really like this panel. Wonder Woman is one of the greatest characters in comics. 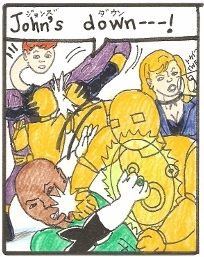 Who knew Iron Man sold his technology to the Time Lord?
Who am I kidding; the Time Lord probably stole it from Stark Industries. 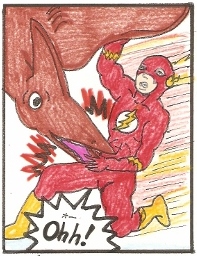 I liked how I basically killed off seven members. With characters like the Flash and Supeman, if they are as good as they are supposed to be they are nearly invincible. However, even they can't look in every direction at the same time. I liked how the Flash gets eaten by a pterodactyl here; he probably had just thought, "Haha, I dodged *that* murderous Iron Man's repulsor rays....Ohh!" 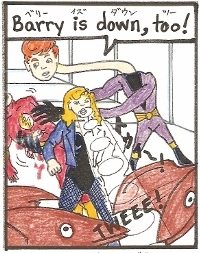 This panel is memorable to me for two reasons. First, I show the Flash actually bleeding and dying. (You'll notice I don't keep Ralph's gloves bloody, however.) Secondly, you'll see Ralph actually crying here. He was the most emotional of the members on this mission, and now that his best friend has been eaten, he lets the tears flow. I liked that (because he then soldiers on and kicks robot ass!) 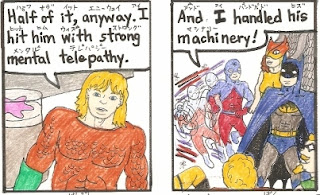 And now the denouement; was it too "deus ex machina"? Earlier Batman had said to Aquaman, "I need you...and one other" so I like to think I played fair. Also, I had a panel where the Hawks and Green Arrow basically say, "Batman is bluffing him, WTH?!?"
Anyway, I like how two of the most over-looked JLAers are able to bring the Time Lord down. Sometimes it's obvious why not all super-heroes have huge esses on their chests, ya know? 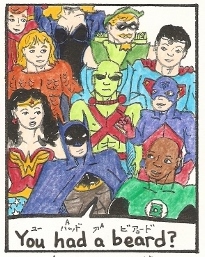 Here's another example of the coloring job I am proud of. You'll see that Batman's dark blue is not the same as the blue of Martian Manhunter and Superman which is not the same blue as the Atom. I wanted to show that Batman and Black Canary are in *dark* blue because they are night creatures. Superman and Martian Manhunter are more "sun" characters. And The Atom is in-between. 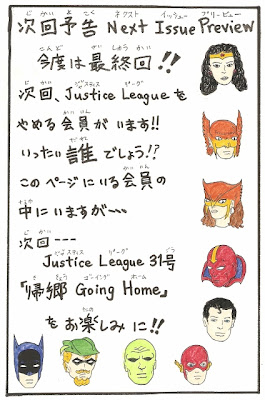 I really like this Next Issue blurb. When I decided to leave Japan I decided to write one last story to say "good-bye." Then for the blurb I hit on the idea to feature pics of every member who really HAS quit the JLA at one time or another. So if you don't know who is leaving next issue....I must have done something right! Come back in ten days and see if you guessed right!
Posted by Russell at 8:30 AM