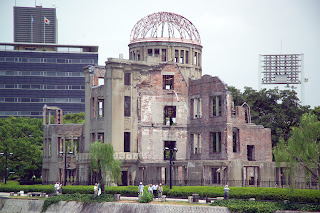 Thirty years ago I went to Japan for the first time. I won a full-paid corporate scholarship from Youth For Understanding and my father's then-company, Honeywell. I was assigned the Mikami Family in Hiroshima.

Before I went I was concerned that they (and others there) would hate me. After all, we had bombed them. To utter devastation. How could they not hate us?

The first step of my adventure was flying from St. Louis to Los Angeles. I went to Stanford University for comprehensive orientation training with a large group of other young people. We were there for about three days, I think. Then we all flew from LA to Tokyo. Those of us assigned to families close to Tokyo left us at Narita Airport. Those of us going farther were split into smaller groups. I was in a group of maybe five other high school kids, boys and girls, going to Hiroshima. We had a quick pow-wow and realized that all of us were a *bit* anxious. I want to say we stayed over-night in Tokyo, going from Narita to Haneda, because that was when we all got together and realized we were in the same situation.

As soon as we arrived at Hiroshima Airport and met our host families, I knew we'd be okay. They were obviously kind and loving and wanted us there. My family, the Mikamis, had a son named Kazuyuki who was assigned to a Florida exchange in September. As part of his placement contract his family *had* to host a guest, so they got me.

I didn't speak a word of Japanese when I first arrived. I think I knew "domo arigato Mr. Roboto" but that's about it. So my host brother, who was desperate to improve his English, was my constant companion for that first month or so because I was desperate to improve my Japanese. Somehow we made it through to his departure date (which was before mine). He was worried about me when he left, partly because he doubted my actual ability and partly, I think, because he doubted *his* ability for his upcoming adventure and wanted assurance that I (and therefore he) would be okay.  We both were. He came back, graduated from a university, and has been working for an international company ever since. Currently, I believe he is stationed in Taiwan.

That summer while we were sharing a room in his parents' home (his brother had moved into the city) he showed me one of his new records. It was "It's Raining Men" by The Weather Girls. Not really my type of music, but one of the few American songs he owned. One day when he wasn't around and I was especially desperate for something in English, I played it. I must have done something wrong, because later he came up to me and told me that he knew that I had played it because I had scratched it! Highly doubtful of this claim, I demanded proof. He showed me the LP and there was a miniscule scratch on it where I guess the auto-needled lifted itself off. When I asked him if it changed the sound of the record, he admitted that it did not. However, he was pissed that I had played it and that I had scratched it. So I told him that I was sorry, it would never happen again, and that I would buy him a new one. He was happy but a bit incredulous at that. The very next weekend when we went into the city to shop, though, I bought him a new dance mix version of "It's Raining Men" by The Weather Girls. I then took possession of the "ruined" one.

And that is how I happened to own a Japanese LP of that song. 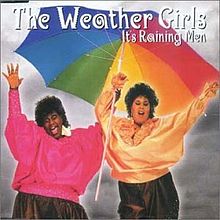 I have no idea whatever happened to it. I guess I must have sold it along with all my other albums. Or it could be in a box somewhere in my parents' house.

Now, whenever I hear that song I don't hear some gay anthem; instead, I think of my great time in Hiroshima. Although, come to think of it, my host brother was probably gay. :-) I know he has never gotten married, because my host parents and I still send letters back and forth to each other and they told me. 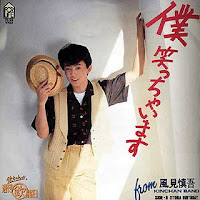 As we head into the 68th anniversary of the end of World War II I really wanted to write about the first Japanese song I ever learned the words to and could sing along with. However, I could not find it on youtube. It's called "Boku Waratchaimasu" by Shingo Kazami. Loosely translated it means, "I smile." It's about a boy who is in love with a girl but either doesn't tell her how he feels or does but she doesn't love him back. (Japanese is difficult to understand that way).  Some of the lyrics of the song are "I wanted to spend the summer with you, I wanted to spend my whole life with you...." I saw this young man perform on some Japanese variety show and then found out that he was actually from Hiroshima, so I took a shine to this song. Someday if I can find a copy of it I'll post more about it. In the meantime, this is the 45 "single" jacket that I bought while I was there.


I don't think I have ever seen this video before, haha!
Posted by Russell at 7:00 AM