You Can't Take It With You (YCTIWY) is one of my favorite movies. I first saw it when I ws in high school at a Frank Capra double feature at The Tivoli in University City, Missouri. It has a folksy charm that is considered very "Capra-esque." The story revolves around two families, the Vanderhofs and the Kirbys. The grand-daughter of one (Jean Arthur) and the son of the other (James Stewart) fall in love. The comedy and drama ensues because Grandpa (Lionel Barrymore) and his family are what we would call "free thinking" or "eccentric" while the Kirbys are decidedly NOT. They are more snobbish and "blue-blooded." Anthony Kirby (Edward Arnold) is a Wall Street barracuda whose goal is to make as much money as possible; in fact, he is after Grandpa's house in a plot to bankrupt a financial rival. Grandpa's philosophy is, of course, "you can't take it with you." 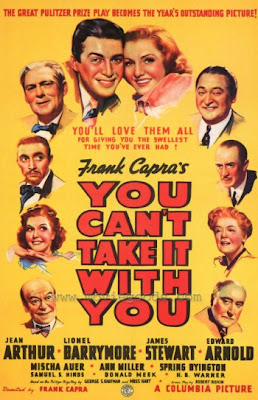 Tony (Stewart) tries to convince Alice (Arthur) that he really loves her, so they decide to plan a dinner party at the Vanderhof home. However, Tony brings his parents to the house on the wrong night, leading to several awkward moments. Eventually the entire house is arrested on a misunderstanding (and because their home-made fireworks go off accidentally). When Grandpa and his family are charged the neighborhood people come together to pay their fine, but leave the Kirbys out in the cold. Faced with their scorn and snobbery Alice explodes at them, refusing to have anything more to do with Tony. Later, Alice moves away to help forget the pain of the break-up. Faced with these same unpleasant memories and lonely for Alice, the family decides to sell the house after all and move out. Tony finally confronts his father and tells him that he, too, is leaving, and has no intention of becoming a businessman like his father. Faced with his son's disdain, and rocked by the sudden death of his rival, Mr. Kirby finally decides to lighten up, play the harmonica, and try to enjoy life. 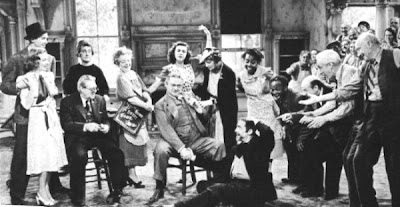 There are some moments in the film that are easier to appreciate than others. For example, when the people are shown in the jail cells, the dialogue and situation rings true. When they are all brought out to face the judge, however, and the neighborhood rallies behind Grandpa and Alice makes her huge speech about populism, it all seems a bit TOO Capra-corny for its own good. Still, the idea that some people are too "uptight" and others are too "loose" leads to a very entertaining motion picture in general. 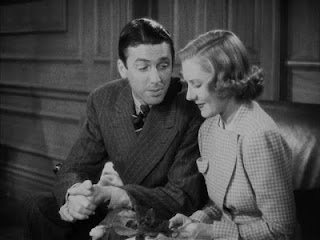 When I moved back to the States I lived in a town blessed with a very strong amateur theatre group. The first play I was fortunate to join in on was *this* one. I actually played Mr. Kirby. Ironically, from that time on I have loved the movie less and the play much, much more. Although the film is a genuine classic, it just doesn't compare to the original play. Let me give a you few examples of how the play is better. 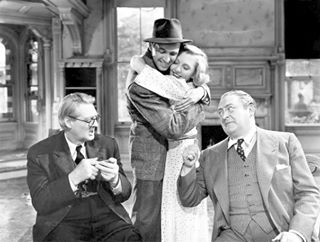 First of all, the play loses two characters to the movie. Neither Gay Wellington the alcoholic actress or The Grand Duchess Olga Katrina make it into the movie. Gay was at the house to help Penny (Spring Byington) write her screenplay. She is another example of the kind of people who frequent the Vanderhof home. Likewise, Olga is a down-on-her-luck Russian aristocrat who was probably cut for the film to make the story less "New York" or "ethnic." It is a shame that we lose these two characters, because they have plenty more character than the mostly nameless and faceless white-bread neighborhood people we get in their stead.

Speaking of white-bread, the play does not include Mr Poppins (Donald Meek). His role in the movie is to serve as "guide" to the house, allowing us the audience to meet all the people who live there. In the play, however, this role goes to Tony, who visits the house several times more in the show than he does in the film. In the movie James Stewart seems to play Tony as benevolent, bemused observer. In the play he really knows these people; you get a better feel that his heart belongs with them rather than with his stuck-up mother and father. In the film that class (?) concern is sort of ignored. 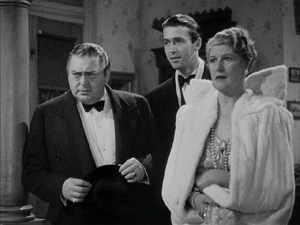 The worst part of the film is that most of the "dinner party" scene is cut. In the play the Kirbys make a grand "go" of the evening, talking longer and even participating in a parlor game Penny creates. There is more discussion about hobbies (Mr. Kirby raises orchids) and more about wrestling before Kolenkhov (Mischa Auer) throws him to the floor. The funniest scene in the whole play is when Penny leads the group in a game she calls "Forget Me Not," a type of word-association. She says, "I'm going to call out five words, jus anything at all, and as I say each word, you're to put down the first thing that comes into your mind." The words she ends up using are potatoes, bathroom. lust, honeymoon, and sex. A huge laugh comes when Mrs. Kirby, upon the last word, says, "Wall Street." Mr. Kirby's next line is, "But what does it mean, sex--Wall Street?!" Well, it turns out that Mr. Kirby is *always* thinking about business, even when....! Believe me, the whole scene is hilarious. 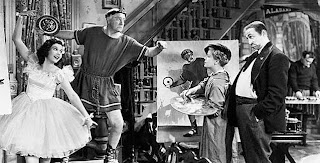 The final third of the film is totally different from the play. In the film, for example, Grandpa gets angry at Kirby while they are both in jail; in the play, Grandpa never gets angry. Instead he is more sad and pitying. Plus in the play that scene is at the house, and Tony is already there, very clearly siding with the Vanderhofs against what his parents represent. In the film the scene between father and son is staged at their office, diluting the pathos and emotion. The whole plot about Kirby's financial rival was created for the film, and in my opinion takes the spotlight off of the "goodness" of the Vanderhof home. We need Kirby to come to his senses because his son is rejecting him, not because his old rival has dropped dead. The final scenes in the play are much more intimate than in the film: Alice is angry at her family, Tony rejects his father, and then Grandpa gently chides Kirby that it is never too late to change. If you enjoyed the film, you should try to find a videotaped version of the play. You won't be disappointed.

Other things I love about the film:
Barrymore appears on crutches throughout the film because, as his character says, "one of my grand-daughters dared me to slide down the banister." In reality Barrymore's arthritis was hurting him, but Capra wanted him so badly that he agreed to let him use crutches.
Donald and Rheba are the "help" who appear to live at the house, just like everybody else. They probably have an actual apartment off-site, but the idea that black people could co-habitate with white people is an amazing visual for 1938.
The crow that helps the men make fireworks is named "Jim." Jim Crow?
The restaurant scene where James Stewart threatens to scream because he loves Jean Arthur so much was not in the play but it is still hilarious. I laugh every time I watch it, and I remember the whole audience laughed when I saw it in the theater.
Frank Capra had a set group or "company" that he evidently liked to use, because if you sit down and watch a few Capra films in a row you'll be sure to recognize several of the same character actors. Here Alice's father Paul is played by Samuel S. Hinds, the same actor who plays James Stewart's father in It's A Wonderful Life. Likewise, H. B. Warner, who plays Mr. Gower in that film here plays Kirby's rival, Ramsey. 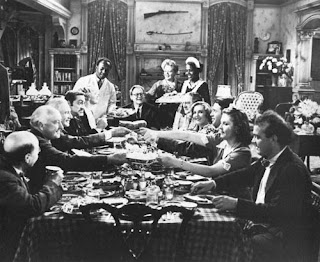 You Can't Take It With You
*Academy Award Best Picture 1938*
Produced by Frank Capra
Directed by Frank Capra
Screenplay by Robert Riskin
based on the play by
Moss Hart and George S. Kaufman


here's a trailer to the PLAY, from the Washington DC version
from last year


Also Nominated:
(in alphabetical order)
The Adventure of Robin Hood
Alexander's Ragtime Band
Boys' Town
The Citadel
Four Daughters
Grand Illusion
Jezebel
Pygmalion
Test Pilot
Among this year's nominees I have seen Robin Hood with Errol Flynn and Olivia DeHavialnd and Boys Town with Spencer Tracy (he won his second Oscar in a row for his role as Father Flanagan). In college I saw The Grand Illusion, the French WWI prisoner of war drama. Just recently I watched Jezebel, which gave Bette Davis her second Oscar. She does a great job, especially playing against Henry Fonda, but the movie itself is definitely a "chick flick" type melodrama. The others, I'm sorry to say, I have never even heard of. By the way, this year was definitely a year for repeats, as Walter Brennan won his second Best Supporting Actor Oscar, and Frank Capra won his third Best Director Oscar for YCTIWY. The only newcomer was Best Supporting Actress Fay Bainter from Jezebel.