It Happened One Night (Best Picture 1934) 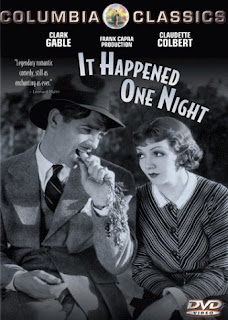 It Happened One Night is one of the greatest motion pictures of all time.
Now, I know this is high praise for a so-called screwball comedy from 1933, but if you have seen it you know what I am talking about, and if you have not seen it you have no idea what you have been missing. I don't think I am over-selling ti to say that IHON is the grand-daddy of romantic comedies as we know them today. 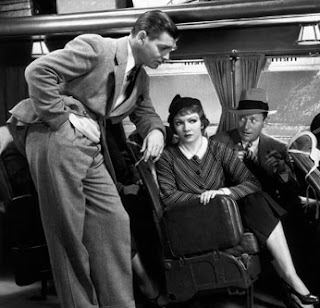 Gable and Colbert in a PR shot with Roscoe Karns,
who plays a comedic role on their second bus


In a nutshell the story concerns spoiled heiress Ellen Andrews (Colleen Colbert) running away from her father to marry the man her father disapproves of. Along the way she meets up with down-on-his luck newspaperman Peter Warne (Clark Gable); they both take an instant dislike to the other. He realizes who she is, however, then agrees to help her elude her father so that he can have the "exclusive story." Because this is a comedy things don't go very smoothly for them. And because it's a romance, they end up falling in love.
The film is a parade of travel "bits" as we follow them from Miami to New York. Each scene has an underlying emotional core, besides being either charming, funny, or touching. For example, their route is washed out by rain so they must stay in an early motel. They register as man-and-wife to save money (both are low on funds and she refuses to wire her father for more). Gable puts up a rope and a blanket, dubs it "the wall of Jericho," and sends her to the other side. In the era of chivalry where even a hint of scandal could ruin someone's reputation, this is incredibly risqué. Then, when Colbert balks at staying but doesn't want to go out in the downpour either, Gable starts to undress. However, he does it with real class, explaining HOW he is going to undress. There's the underlying hint of scandal, the teasing of her (and her thinking he may be wanting to take advantage of her), and the sheer comedy of his lines. Urban legend says that when Gable took his shirt off and was shown without an undershirt, actual undershirt sales plummeted! 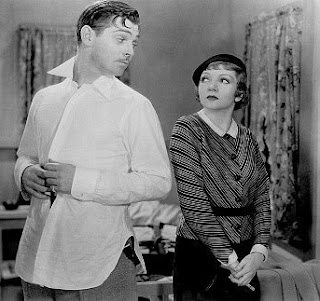 The "wall of Jericho" comes to symbolize the walls between them: class, gender, power, knowledge, experience, etc. Gradually we see this wall weakening, until it comes down, both literally and figuratively, in the final scene. 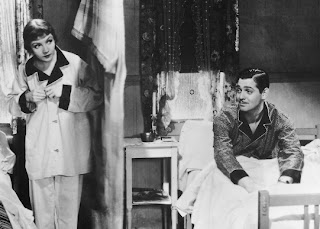 The next morning is a key scene. Colbert wakes up, realizes that not only has Gable not raped her, he has pressed her dress and made her breakfast. It begins to become a partnership. Their playful banter about how you're supposed to dunk a donut in coffee seems true-to-life. When private detectives hired by Ellen's father show up wanting to look at her, they fall into a play-act that feels absolutely genuine. Don't miss the motel manager's throw-away line at the end, "They're a perfectly nice married couple." 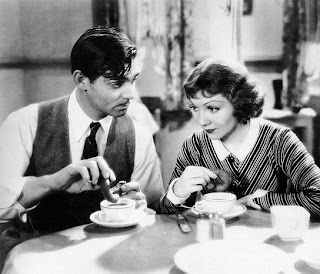 As the two get closer to their goal of New York City and we get more and more of these scenes, we know they are going to fall in love before they do. One of the best things about this film is the ability to watch it over and over again and try to see where each begins to fall in love with the other. Their initial mis-trust gives way to cooperation on a mutual goal, which leads to a co-dependence and then to love. Gable and Colbert are both absolutely perfect in their roles; you like and dislike both of them
equally! Tellingly, there is no sweet "I love you!" finale; we are told that they are married and then are shown that the "wall of Jericho" is falling. The rest is left to our imaginations.
Urban Legend says that this film played a huge part in the development of Bugs Bunny. Clark Gable is shown crunching on carrots while he tries to hustle a ride in the famous hitch-hiking scene. Roscoe Karns as an annoying fellow customer calls him "Doc" several times. In their final scene together Gable and Karns talk about somebody else named "Bugs." All circumstantial evidence, I know, but it's fun to watch this movie and think that the animators at Warner Bros thought, "Let's make a Clark Gable-type cartoon character!" Bugs Bunny made his debut in 1938. 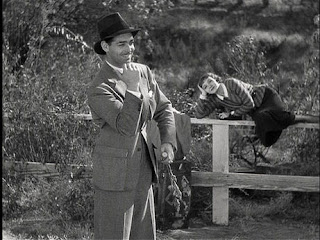 Another reason that this is a great film (how many reasons do you need?) is the wonderful work by the supporting players. Walter Connolly as Ellen's father is exasperated by her stupidity, then frantic in his concern for her safety, and then quietly resigned to her choice in husband. It's a very quiet performance but as the core of the story he pulls off his scenes beautifully. 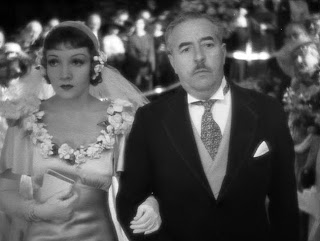 Walter Connolly as Andrews, Ellen's father
Likewise, Charles C. Wilson as Warne's editor starts out exasperated by Gable's drunken stupidity, then switches to anger at being taken advantage of, then switches back to respect for Gable's true talent. Then when destiny switches on them again, the quiet scene between them when Gable comes in to apologize really shows what masculine friendship meant in the 30s. "You think you have a great yarn, and then something comes along and messes up the finish," he says, quietly putting a few bucks in Gable's pocket because he knows that Gable loved Colbert after all. 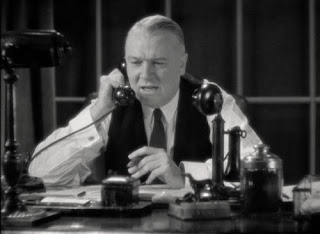 Charles C. Wilson as The Editor
At the Academy Awards presentations this film became the first film to win "the big five": Picture, Director, Actor, Actress, and Screenplay. That feat was not repeated until 1975, by One Flew Over the Cuckoo Nest. It happened again in 1991 with The Silence of the Lambs.

It Happened One Night
*Academy Award Best Picture 1934*
Produced by Harry Cohn
Directed by Frank Capra
Screenplay by Robert Riskin
based on a short-story by Samuel Hopkins Adams
For some reason there are a huge number of youtube videos calling themselves "trailers" but are obviously home-made. I'm fine with people making them, but don't call them "Official Trailers!" This one looks semi-official, anyway...

Here's another year of many, many nominees. For 1934 and 1935 there were twelve nominees for Best Picture; after 1936 they cut back to ten nominees. It wasn't until 1944 that the Academy settled on five nominees, which was the standard until very recently.

In doing research on Claudette Colbert I realized that she was in at least two of the other nominees, both of which are now better known via their remakes decades later: she portrayed the lead in Cleopatra, and she was one of the mothers in Imitation of Life.  The Gay Divorcee is a Ginger Rogers-Fred Astaire movie, but I've never seen any of their films. The only movie that I have seen here is The Thin Man, starring William Powell and Myrna Loy. It's an absolute classic and another of my all-time favorite films. I wrote a review of it last week you can read here if you missed it. It's a shame it lost out to IHON, but I guess IHON is the better over-all film.
Posted by Russell at 7:00 AM