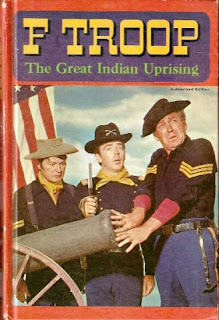 During one of my wife's requested visits to an antique mall, I happened across an item I did not even know existed: F TROOP The Great Indian Uprising by William Johnston, with illustrations by Larry Pelini. I bought it a few weeks ago and finally got around to reading it last week.

It's an amusing story about how Sgt O'Rourke and Corporal Agarn are not making enough money selling Indian-made trinkets through O'Rourke Enterprises. So they decide to re-negotiate their contract with the Hekawis. Meanwhile, Chief Wild Eagle and Crazy Cat have decided that *they* need to make more money on their souvenirs, too. So in the midst of this animosity, a general from Washington arrives and wants F Troop to go to war with the Hekawis!Captain Parmenter, of course, is against this idea, but for the sake of government secrets can not reveal all of his problems to his girlfriend, Wrangler Jane, who thinks he is going stir crazy.

Each "star" has his or her bit in the story. It's a compliment to the author that I could "hear" the actors associated with these characters speak these lines in the story. I found myself "visualizing" the action with the stars of the show. It's like a long-lost F TROOP SPECIAL EPISODE or something.

The cover is of course a stock photo from ABC-TV featuring Larry Storch, Ken Berry, and Forest Tucker.

The one complaint I have is that the fine illustrations were all printed in blue ink, which made some of the details bleed together. Other than that quibble, I enjoyed it immensely.  It's finds like this that keep me going out to antique malls etc with the wife. You never know what you're going to find! 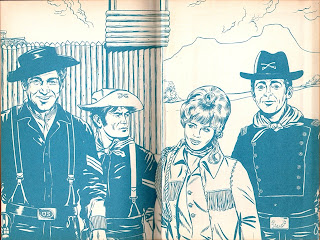 Email ThisBlogThis!Share to TwitterShare to FacebookShare to Pinterest
Labels: Book-Ends, My Favorite Things