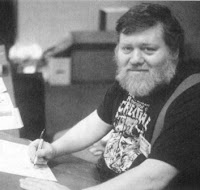 When I was a kid Dave Cockrum was one of the first artists whose style I knew and loved. I saw my first Cockrum issue of X-MEN on a road trip somewhere with my father...probably going to visit my grandfather in Tennessee. X-MEN #99 was something I had never seen before, and I eagerly ate it up. When I got back home I tracked down the first few issues before this and of course bought all issues afterwards (until #150, but that is a different story). By the time of XMEN #107, where the mutants meet another dimensional LEGION of SUPER-HEROES, I had learned all about Mr. Cockrum. I knew that he had been initially involved with the LSH before Mike Grell had taken over. I even had several of the "back issues" with Dave's art. Eventually I got all of his issues.

While Dave was on LEGION he slowly but steadily re-designed most of the members' costumes. Even today nearly 40 years later his uniforms for characters like Chameleon Boy, Lightning Lad, Dream Girl, Karate Kid, and Star Boy are the *definitive* designs.

I was saddened to hear that he had left the LEGION because the editor had not agreed to return the Wedding of Bouncing Boy and Duo Damsel two-page spread that Dave had asked for. (reprinted below) Because Dave couldn't get his own art back, he left DC and went to Marvel. The rest is history.

Eventually he existed drawing for both companies and for others, as well. But he will always be linked with those two power-houses, XMEN and LEGION.

In 2004 Dave became sick with diabetes and pneumonia. His friends at Aardwolf Publishing created a few fund-raising events and items, and raised more than $25,000 to help pay his medical bills. Marvel also chipped in to help, in part due to his XMEN characters making millions of dollars at the box office. At this time I realized I would probably never get the chance to actually meet one of my idols, so I sent money in to help with a quick note about "please get better soon!" I, like all other contributors, got the following autograph in my copy of the commemorative book. I treasure it. Dave died two years later. 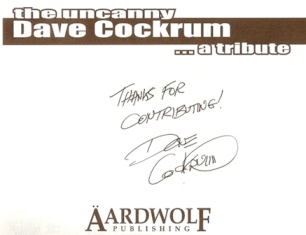 HAPPY BIRTHDAY and RIP,
Dave Cockrum!
We miss you!