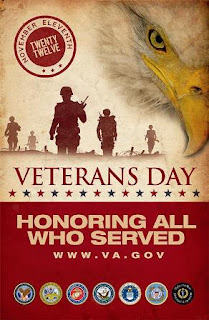 Today is Veterans Day in the United States. Because it falls on a Sunday, the official celebration will occur  tomorrow. However, Veterans Day started out being called "Armistice Day." It originally celebrated the end of hostilities of the First World War, as the Armistice to end hostilities of that conflict occurred on November 11, 1918.

President Woodrow Wilson created the first Armistice Day in 1919. Congress eventually made it a national holiday in 1938. Then after World War II, veteran Raymond Weeks led the fight to change Armistice Day to Veterans Day to honor all veterans, not just those from World War I. In 1954 President Eisenhower made the change legal, and it has been called Veterans Day ever since.

It should be noted that Veterans Day is set aside to honor all who served in the US military, and that Memorial Day is to honor those who died while serving.

So take a veteran out to lunch today or tomorrow, and thank him/her for their service. It's the least we can do.
Posted by Russell at 8:00 AM

Email ThisBlogThis!Share to TwitterShare to FacebookShare to Pinterest
Labels: Holidays