This issue is one of my all-time favorites. However, I mostly like it because it is based on a great story by E. Nelson Bridwell and Kurt Schaffenberger for SUPER FRIENDS #32. The Super Friends were, of course, Superman, Aquaman, Wonder Woman, Batman, and Robin. They are attacked by Batman's arch enemy The Scarecrow, who instills in them various phobias.  This is a great plot, so all I had to do was replace Robin with Black Canary, shoe-horn in Hawkwoman, replace Superman with Martian Manhunter, and cut-out the Wonder Twins. Luckily for me, they didn't do anything in the story, anyway, so that part was easy! The rest of the story is basically just as Bridwell-Schaffenberger created it. So not only is the story one of the best, but I followed the layout and "flow" of the great Kurt Schaffenberger doing my story, so, really, how could I miss?

Translation was fun this time, too. I had to look up such odd words as "hydrophobia" (I don't remember the word for "fear of bats" in English, sorry) and translate them. I ended up using both terms, ie "hydrophobia" and "fear of water," because the former was (obviously) much more conversational. Kinuyo Yamamura was a real trooper, again, and was getting into the work by this point.

Enjoy my "remake" of SUPER FRIENDS #32 and we'll go over more of the story points in the AFTERWARDS. 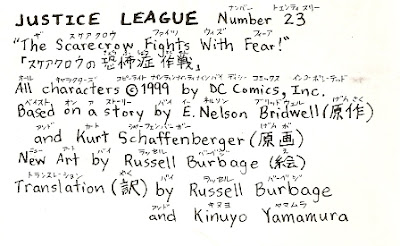