These United States Series: The End 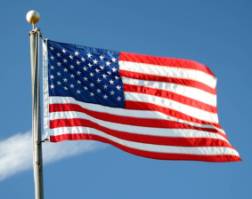 Today I officially end my 51 part series "These United States." (The 50 States and Washington, DC)
I started last April 28 with Maryland and just finished on March 4 with Vermont, which I updated today.

Now, you might be thinking, "Wait, in what parallel universe is Maryland first and Vermont last??" Well, let me tell you! I saw the movie "Julie and Julia" last year; it's about a woman named Julie who challenged herself to try every recipe in Julia Child's cookbook within a set amount of time (a year, I think). I thought of doing something similar, and hit upon writing about each of the States.

At first I thought of going in alphabetical order, but I would have to figure out how often I would post (once a week? four a month?). Then I thought of going in chronological order by year.....but that would be the same issue as the alphabetical listing: how often would I do it? Then I happened to hear that March 1 was my current state Ohio's "birthday." What if I linked my posts to each state's "birthday"? Of course, if I did that, I would either have to start with the next state, whichever it would be, or wait until January of 2013 to start with Alaska. Obviously, I didn't wait. :-)

So here is how I organized it....I listed the states in chronological order, then re-copied them into a calendar notebook. That is how I can tell what order they joined ("Ohio joined seven years after Tennessee (June 1796) and nine years before Louisana (April 1812)"), but could see that Florida (3-3) was one day before Vermont (3-4)!

One last thing...when I decided to write these I wanted to do something different besides the State Bird, the State Flower, etc etc blah blah blah. I hit on the idea of Famous People, but unfortunately, I really don't know a lot of recent sports figures. I gave it the old college try, but you may have noticed that "Sportsmen from (whichever)" fell by the wayside about five months ago. Sorry!!

I don't know if YOU learned anything exceptional by reading this series, but I know I had a blast doing the homework for it. Four states were independent countries before they joined the Union!? Virginia used to be the majority of the East Coast? Amazing. Plus, I realized (again) that we live in a wonderful, blessed place. There are SO many places in America I want to visit now!! I hope you enjoyed it half as much as I enjoyed doing it. :-)

Lastly, here's the list of the Fifty States of the USA in chronological order. The first thirteen states are in order of when they ratified the US Constitution. Delaware signed first, on December 7, 1787, so it gets to claim The First State. The other States are in order as to when they were admitted, ending with Hawaii on August 21, 1959.