In 1993, comic book creators Dwayne McDuffie and Denys Cowan, along with several others, founded a company called Milestone Media. They wanted to have a comic book company where their creators would be able to keep the ownership rights for all of their creations. Oh, and they wanted to have more variety of characters portrayed in comic-books. All four of the founders were African-American men, and they had grown tired of Superman, Batman, Spiderman, and Wonder Woman all flying around a world that was so  White.
The four flag-ship titles at Milestone were HARDWARE, ICON, STATIC, and BLOOD SYNDICATE. In the simplest of terms, these books represented the company's versions of Iron Man, Superman, Spiderman, and The Avengers. Each made their debut in the Spring of 1993 plastic-wrapped with a trading card (if I remember correctly; maybe it was a poster?). Each were created by Dwayne McDuffie and designed by Denys Cowan or John Paul Leon (STATIC).

At that time I was living in Japan, but I was getting some comics delivered to me via subscription, so I knew about this start-up. In fact, I quickly subscribed to all four titles and when XOMBI and SHADOW CABINET appeared in the next year I subscribed to those, too.

I did this for two reasons: 1. first and foremost, I have always been a fan of the creative teams getting part of the profits from their work. If someone writes or draws a SUPERMAN comic that sells a gazillion comics (such as the DEATH OF SUPERMAN, right about this time) I think they should see a piece of those profits. Obviously Siegel & Shuster created the character of Superman; but others created that particular story, and I think it's fair for them to get more money for that. Until very recently comics contracts were established that  writers/artists/colorists/letterers were "work for hire" and did not see any residuals if their books sold five copies or five million. Call me "socialist" but to actually reward hard work is OK in my book. And 2. I like minority characters and underdogs. Of course I like Superman, Batman, and Spiderman; but my favorites have always been the *other* guys: Aquaman, Robin, and Captain America. Plus growing up in St. Louis surrounded by various other ethnic and religious groups, I always hated that the universe shown in comics was Lily White.

So it should go without saying that I enjoyed these books very much.

HARDWARE starred an alpha male scientist/engineer who creates a high-tech suit of armor and then has his ideas stolen by his employer, an older white guy (think: Batman or Iron Man working for The Man instead of themselves). It was very strong Angry Black Man stuff for the first few issues, and I'm sure there was a bit of "work for hire" commentary going on there, too. However, after the first arc or so was completed he became (to me) just another Iron Man type character (done in a very gritty, violent, Nineties-ish way) and I lost interest. I stopped reading it after the second year, however it lasted the longest of all of these titles, so *somebody* was reading it, haha. 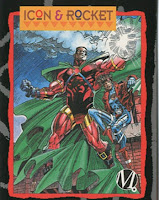 ICON featured a strange alien from another planet who lands on Earth with powers and abilities far beyond those of mortal men. Instead of landing in Kansas and looking white, however, he lands in the South and is black. Instead of being the "icon" that Superman becomes, he hides his abilities and stays out of the limelight until he is convinced to step forward. This series was in many ways the most interesting to me because the creators posited "What if Superman were Black?" in various ways. Augustus Freeman was not mild-mannered; he was more like Bruce Wayne sitting in Wayne Manor NOT being Batman. When he finally decides to pick up a mask and cape, he is very laid-back about it. But he's the equivalent of Superman! So there really isn't much that can hurt him. In that sense, he kind of reminded me of the Superman as portrayed on TV by George Reeves; an easy-going guy who calmly watches the chaos around him until he steps in and solves the problem. I may be mis-remembering the series, because there was also a "hot-head" "side-kick" character named Rocket who was very militantly African-American, but I remember their relationship as being based on affection, not antagonism. I also remember the wonderful artwork of Mark Bright. This book was consistently excellent.

STATIC was a wonderful series co-created by John Paul Leon about a high-school kid name Virgil Hawkins who happens to get electro-magnetic super-powers. He was defnitely Milestone's version of the Spiderman character: the "teenager full of angst also needing to stop the bad guy and get home in time to do his homework" shtick done again, but done well. This was the most "fun" book Milestone had, and I guess it's fitting that Static as a character is probably the best-known Milestone hero: he appeared in animated form for the WB from 2000 to 2004 and has been made into an action figure.

My favorite title, given my preference for group books, was the Milestone collection of super-heroes, THE BLOOD SYNDICATE. If I am remembering it correctly, there was a gang-war going on between The Bloods and The Syndicate when the radiation occurred in their dimension, giving super-powers to those that were not killed out-right. The survivors decided to merge as The Blood Syndicate and work to improve their neighborhood, at first targeting drug pushers. Because none of these characters were Superman-Batman famous, they could and *were* killed during adventures, which to me heightened the drama. (SPOILER!) Famously, their first leader dies within the first story arc....and we're off! Not only was there a heightened sense of drama, but there were also Korean-Americans, women of color, gays, Latinos, and yes, even some white folks, thrown into the mix. You know, like the real world. The majority of issues were written by Ivan Velez, Jr. I still remember this series fondly.

For some reason (monetary?) Milestone stopped publishing in 1997. Several times in the past few years McDuffie has tried to merge his characters into the DC Universe proper (they all existed in a separate universe called "Dakota"); just recently several characters appeared in JUSTICE LEAGUE, and there were several Milestone-DC team-ups, such as Xombi meeting The Spectre in BRAVE & BOLD. Unfortunately, Dwayne McDuffie passed away suddenly one year ago. Although STATIC was part of the recent "New 52" rebooting of the DCU, there were creator differences right from the start that basically guaranteed that the series only lasted a handful of issues.

I miss Dwayne McDuffie's vision and I miss Milestone comics.
Posted by Russell at 5:05 AM