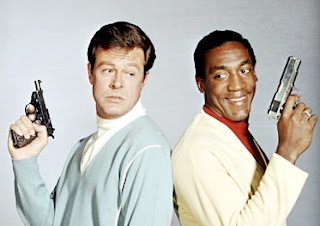 It is another one of life's little ironies that in the mid-Sixties, while the FBI had *no* Black agents whatsoever, TV had not one but two super-spies who were African-American. J. Edgar Hoover, then director of the Federal Bureau of Investigation, was most likely a racist, homophobe, and sexist pig product of his time. For the TV series The FBI (1965-1974) there were only white male agents.

Meanwhile, on NBC, Bill Cosby portrayed Alexander Scott, a Temple graduate, a Rhodes Scholar, and a spy whose cover was tennis trainer to co-spy Robert Culp (as Kelly Robinson). They had a definite charismatic chemistry to their partnership, which made the show a huge hit for three years (1965-1968). Bill Cosby won an Emmy for Lead Actor in a Dramatic Series for three years in a row for his work on this show. 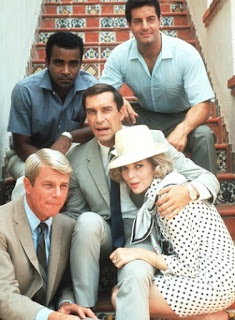 On rival CBS, Greg Morris portrayed electrical wizard Barney Collier on MISSION:IMPOSSIBLE (1966-1973). This was much more of an ensemble piece than I SPY was; Barney often worked closely behind the scenes with fellow operative Peter Lupus as Willy Armitage as the "stars" Peter Graves, Martin Landau, and Barbara Bain played the con up front. For seven years, all the operatives treated each other equally and with respect, working together to topple the dictator or drug lord of the week. It was fantasy, yes, but it's what all fair-minded people *wanted* to be true, yes?

Several years ago I read that because of these two shows, the number of Black Americans who applied for federal jobs increased dramatically. Nowadays it is nothing to see African American Secret Service agents, Federal agents, and, yes, Presidents. Did Bill Cosby and Greg Morris have something to do with this? Well... that is confidential information. :-)