So for the first ten years that Black Panther was the first African super-hero over at Marvel, DC had one (1) African American character, and he was named Mal Duncan. He had no powers, no costume, and no future. 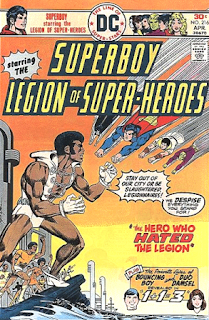 Speaking of the future, in April, 1976 a new super-hero named Tyroc appeared in SUPERBOY/LEGION #216. He was created by Cary Bates and Mike Grell to be the first Black Legionnaire. See, the Legion of Super-Heroes exists in the 30th Century, with members coming from the United Planets. In other words, aliens work side-by-side with Earthlings to help protect the universe from the Fatal Five, the Suneater, and the Khunds. However, with more than 20 members, none of them were black. As a side note one of the Legion writers (Jim Shooter) had intended to make Ferro Lad an African-American when he created him in 1966, but the editors refused this trait and Ferro Lad was made caucasian instead.

So that brings us to Tyroc, who was one of the worst characters ever created. His voice was magical; he could scream and do anything. Need to have plants grow super-fast? Got it. Need to have bombs' fuses melt? Got it. Need to have a good origin story? Oops...that seemed to be out of his realm! It was revealed in S/LSH #216 that the reason we never see black people in the pages of LEGION is because they are all segregated on an island called Marzal. Tyroc is their hero, and hates the Legion for never helping them out. Luckily, the Legionnaires in this story are oriental, blue, green, and white, and they convince Tyroc that "we're all friends."

It never got much better.

After Cary Bates left as LEGION writer, Tyroc was never shown in action again. His next appearance was when writer Gerry Conway wrote him off the stage completely, more than five years later. For some reason, in all this time DC couldn't come up with any other characters in the Legion series that happened to be black. It was a pitiful situation. 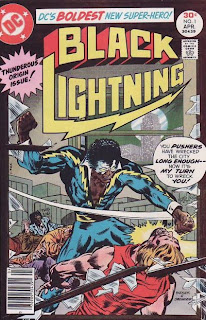 Meanwhile, back in "mainstream" DC continuity, Black Lightning made his debut in 1977. Black Lightning was Olympic athlete and teacher Jefferson Pierce, who became a super-hero vigilante in order to help fight organized crime in Metropolis. Black Lightning was created by super-talented Tony Isabella and artist extraordinaire Trevor Von Eeden. He was created as another Batman-type urban crime-fighter, and as such was well done when he had his own series. He was a victim of publishing changes, but a few years later returned as a member of  The Outsiders. He has since become more of a mainstream super-hero, joining the Justice League and fathering teen-aged girls who are/were members of Teen Titans or something similar.

Well, remember Mal Duncan, the no powers-no costume-no hope character who was DC's token (oops) black character during the early Seventies? When TEEN TITANS was revived, so was he. He became first The Guardian (with an exo-skeleton that gave him super-strength) and then The Hornblower (too complicated to explain). He also suddenly had a girlfriend, Karen Beecher, who became The Bumblebee. Finally, DC had two African-American characters with super-powers, neither with "black" in their name! Unfortunately, they were both in TEEN TITANS, which was cancelled after less than ten issues. So nobody out there knew about them....

Two years after Black Lightning made his debut, DC was about to create their first major Black Super-Heroine, The Vixen, and put her in her own series. However, she, too, was a victim of the same publishing changes that cancelled BLACK LIGHTNING. Her eventual debut was in ACTION COMICS #251 (July, 1981). She was created by Gerry Conway and Bob Oksner. 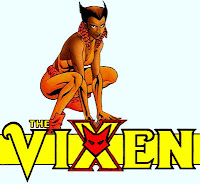 Mari McCabe is an African model who via the Tantu totem can "borrow" any animal abilities such as the speed of a cheetah, the swimming abilities of a dolphin, or the flying abilities of an eagle. She was initially intended to be a soloist in a baby-blue and yellow costume that just screamed "fox" (actually, it sorta kinda resembled Wolverine's original costume...imagine that!). Then when her creator also re-created the Justice League, he decided to add her to that mix, giving her a terrible haircut but a better (brown/gold) costume. Thus she became the JLA's first non-white Earthling member. She has since participatded in such books as SUICIDE SQUAD with her on-again off-again love interest Bronze Tiger (another African-American martial artist super-hero) and back in JUSTICE LEAGUE. For a time she and Black Lightning were members together, making it clear that the JLA didn't have a regulation on having only one minority member at a time! ;-)  She has also appeared several times on Cartoon Networks' JUSTICE LEAGUE cartoon. For lots more about Vixen, please visit my buddy Jason's blog Off My Bird Chest and he will tell you everything you'll want to know. :-)

DC's biggest Poster Boy for African-American characters quietly made his debut in 1982 as a member
of The New Teen Titans. Cyborg was created by Marv Wolfman and George Perez as a half-man half-robot former athlete named Victor Stone. The entire "NTT" re-boot was a huge success, outselling all other DC titles for several years. Cyborg eventually made it to Cartoon Network as one of The Te 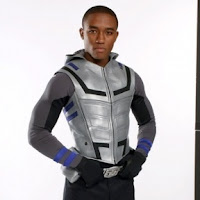 en Titans and also appeared on the WB television series "Smallville," played by Lee Thompson Young. Currently he has been added to the rebooted JUSTICE LEAGUE as a founding member.

At about the same time that Cyborg made his debut, DC and the LEGION finally created a super-hero in the future who happened to be black....out of the entire universe, they finally found one! He was the new Invisible Kid, created by Paul Levitz and Keith Giffen. Oddly, he, too, like Black Panther and Storm, is actually from Africa.

In 1997 DC created another major African-American super-hero: Mr. Terrific, who eventually became the leader of the Justice Society. He was a reboot of a Golden Age character as re-envisioned by John Ostrander and Tom Mandrake. Most recently, Batwing was created as The Batman of Africa by Grant Morrison and Chris Burnham.


At this time, neither DC nor Marvel has a major, successful super-heroine who is African-American.