BHM The Black Panther and The Falcon 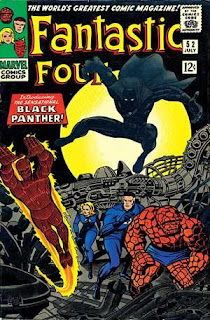 The very first Black super-hero in a major super-hero comic-book is The Black Panther, who made his debut in FANTASTIC FOUR #52, July 1966. The Black Panther is the King of the African nation of Wakanda. He is not a US citizen, and never has been. He has super-speed, super-agility, and some super-strength. He fought the Fantastic Four (as Marvel heroes are wont to do) but then became their ally. He soon joined Marvel's other premiere super-hero team, The Avengers, and was a member in good standing throughout the rest of the 60s and early 70s. He eventually headlined his own series, and ended up marrying fellow African and fellow Black super-hero, Storm. He was created by Stan Lee and Jack Kirby. 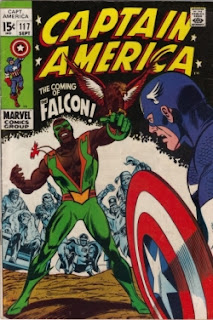 The very first African-American super-hero in a major super-hero comic-book was The Falcon, who made his debut in CAPTAIN AMERICA #117, Sept 1969. Sam Wilson was an athletic hustler who got on the wrong side of The Red Skull and ended up turning against him and partnering with Captain America. It also turned out that he had an almost-supernatural ability to communicate with some birds in general and his pet falcon, Red Wing, specifically. Originally he had no super-powers other than that (ala a grounded Hawkman) but eventually he worked with Black Panther and incorporated a flight-pack into his uniform so that he could fly along with his pet/ally. He was created by Stan Lee and Gene Colan. 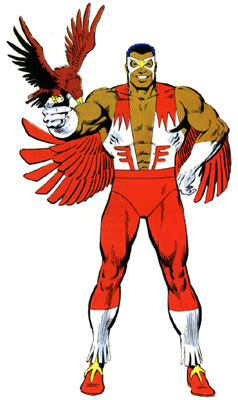 Silly kid that I was, I liked both of these characters as soon as I came across them. Sure, I thought Black Panther's costume looked a tad too much like Batman's, but he was level-headed and cool. Cap, meanwhile, was a bit of a boring guy, and The Falcon questioning how he fit into the role of super-hero that he had been handed was a dramatic and interesting story for me. It didn't hurt that both of these characters were allies of The Avengers, my favorite Marvel book.

It should be pointed out that The Falcon was the first African-American super-hero to not have the word "black" in his name. For several years in the 70s every new black character was called "Black this" or "Black that." It wasn't like there were hundreds of caucasians called, "White this" or "White that," though. So I really didn't care for it. That was another reason I liked The Falcon. He wasn't a Black Super Hero; he was a super-hero who happened to be black. And for years, he was the first and only African-American super-hero doll action figure! So there's that cool factor, too. And yes, I had one of these as a kid. Are you kidding, I had them all! ;-) 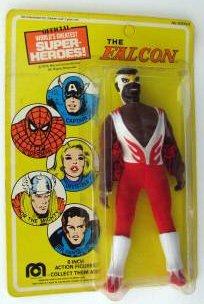