The most famous inter-racial cast in TV history, in my opinion, is the cast of STAR TREK The Original Series. 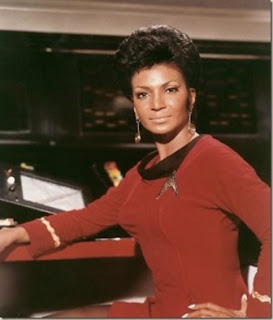 When it was being developed in the early 1960s creator Gene Roddenberry wanted to present a future that was optimistic. During the Cold War, and then the Civil Rights Movement, and later the Vietnam War demonstrations, the local & world news was not very "good." Instead of showing a future that was scarred by war, he wanted to show a universe where we mostly all got along. And in creating Star Fleet and The Federation, he knew he had to show that Earth had gotten its own act together first.

So when the series made its premiere on Sept 8, 1966 we are introduced to officers who were not just white American males (Kirk and McCoy) but also an alien (Spock), a Scott (Scotty), an Oriental (Sulu), and an African woman (Uhura). A Russian (Chekov) was added a year later. This was unheard of at the time. Other "military" shows of the era were all white and all male: McHALES NAVY, VOYAGE to the BOTTOM of the SEA, and GOMER PYLE, to name just a few. 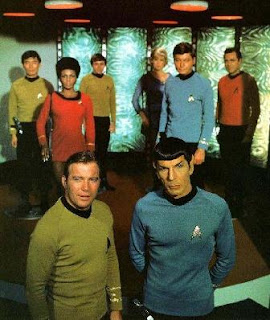 Sure, the women were in mini-skirts and go-go boots; but they were shown to be competent and respected members of the crew regardless. Although it was never explicitly shown on the series itself, Lt. Uhura was basically fourth in line in command of The Enterprise; I remember one specific episode where most of the officers were planet-side but because there was a visiting Commodore or Admiral on-board, Lt. Uhura was out-ranked. In the Filmation cartoon version of STAR TREK, in the episode "The Lorelei Signal," Lt. Uhura and Nurse Chapel do take command of The Enterprise against an invading force of alien females when all the men are incapacitated.

The point of the series was its inclusiveness. I remember watching it as a kid and wanting to spend more time with the supporting characters instead of Kirk and Spock. (And who would have guessed I would grow up to have a "mixed marriage" and a little Spockette of my own?) People as varied as Whoopi Goldberg and Astonaut Mae Jamison have said that they watched STAR TREK to see people like themselves on television. A quick perusal of other 1966 TV shows paints you the picture: besides MISSION: IMPOSSIBLE (another Desilu producion which  also made its debut in 1966), I SPY, DAKTARI, and HOGAN'S HEROES, *NO* other TV show featured any African-American as a regular cast member. And all of these series featured actors, not actresses. So that's approximately 60 shows that were Lily White. No wonder Whoopi watched STAR TREK, haha!

Nichelle Nichols, the wonderful actress who portrayed Lt. Uhura, has told the story about her planning to quit STAR TREK because she was not satisfied with the scripts for her character. Certainly, especially in the first year, her charater is wontonly unused. Several episodes where she should have been used she was replaced by some other nameless Lietenant who just happened to be White. (I'm thinking specifically of "Shore Leave" and "The Squire of Gothos") However, she happened to meet Dr. Martn Luther King at about this time, and according to her he insisted that she stay, saying that this barrier, once crossed, could never be closed again. She stayed.


Lt. Uhura was placed directly behind the Captain's chair, so almost every time there was a close-up of Kirk, there was Lt. Uhura in the background. Symbolically, it couldn't get any better than that. In fact, in those episodes where Lt. Uhura is not present, her absence is felt almost viscerally.


After STAR TREK went off the air and into syndication, mainstream US TV went into a very segregated direction: sure, there were now shows like SANFORD & SON or THE JEFFERSONS, but ensemble cast-shows were still almost entirely white: BOB NEWHART, MARY TYLER MOORE (who lost John Amos to GOOD TIMES), HAPPY DAYS, and MASH, to name just a few. Even now, there are more shows with no minority characters than there are with. "Separate but equal" seems to be the term for network television now that there are so many different channels to choose from. That's a shame, and not the future that I had hoped for.﻿