Well, what did you think?

Re-reading it now, I certainly admire the bravery I exhibited by creating ten different nightmare scenarios. If this had been the real JLA comic it would have only featured five or so "core" members' dreams. I liked that I included everybody, but on the other hand, it does make for a long "busy" issue. I only distributed my comics once every few months so I didn't want to only use a few members. And in stories like this, it didn't make sense to me to only use a few anyway; if Dr. Destiny didn't kill all of them at once, the survivors would track him down for justice! So I had to have him attack all of them, although I guess I could have only actually featured a few....still, if my featuring all of the characters is the only complaint you have, I think I'm doing pretty well, haha!

One thing I seriously *do* think I was doing well is the coloring. This issue featured ten very specific background scenes and I think I knocked most of them out of the park, atleast color-wise. Here are two of my favorites: Mars and Paradise Island... I really liked the underwater scenes I did with Aquaman, Mera, and Aqualad, too, but they didn't pull out easily to feature here. (click on the images to enlarge them) I was enjoying coloring most of these stories, and I think it shows.

Another thing I liked about this issue was the amount of history I was able to jam into the story. For example,for the Flash I was able to feature six of his most dangerous foes. If I were the Flash, with his truly terrible Rogues Gallery, I would be afraid of them ever teaming-up. So it was easy to feature them here, and in one sequence we add depth to "my" universe. By the way, Captain Boomerang and Weather Wizard had already appeared, and the others were going to make "real" appearances before the series concluded. I had never loved the character of the Flash, but I have to admit I liked his villains. :-)

Another sequence I thought I handled well was Superman's nightmare. It opens with all of his loved ones killed. Sure, the scene is gruesome, but I thought it was something this terrible that would be Superman's fear. Then basically Lex Luthor is a bully, taunting him about his friends being killed. Superman kills Lex in anger, which rings true to me. I'd be interested to read any other opinions about this (and the other scenes, too). 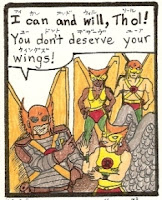 In Hawkwoman's nightmare I was able to show all the other "Hawk" costumes in DC continuity, which I thought was a good touch. This was the time that the HAWKWORLD continuity chaos was in full effect at DC, so I wanted to be able to say "my" Hawkman and Hawkwoman would/could wear whatever they happened to be shown in, haha.
Speaking of Hawkman, I liked how he was the protagonist of this story. It just made sense to me that if the entire JLA was put out of commission, it would be characters like him, Aquaman's wife Mera, and Batman's "son" Robin who would lead the effort to come to their aid.

Also, I loved coloring the JLAers being teleported. I thought I did a good job with those scenes.  One last pat on my back before we move on to what I didn't like....for some reason, I really 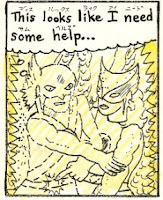 REALLY like the drawing of Hawkman reproduced below. As a kid I never liked JLA artist Mike Sekowsky's version of Hawkman. I much preferred Murphy Anderson's version, and then, later, Dick Dillin's version. In the mid 70s I came across an illustration of him by Terry Austin that I LOVED. From that day to this, that is the "template" I use in my head when I draw Katar Hol. 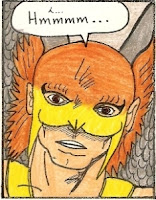 The one thing I really don't like about this issue is Green Arrow's nightmare. I wanted to do something Escher-like or Dali-like, but I ended up doing something simple and not at all good! The idea was fine, I think, but the execution was not. 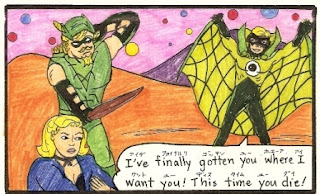 Besides that, the one thing I sort of regret now is that I didn't manage to wrap this story up in one part. I kept thinking that two-parters when done sparringly would be okay. However, except for maybe the first one (The Time Lord story) NONE of my two-parters really worked. In hind-sight I wish I had had Hawkman and Elongated Man rush off to find Dr. Destiny and stop him in a few pages here. Of course, you haven't read the conclusion yet so I should probably not say anything....never mind. Let me end this AFTERWARD with this image, the composition I swiped from TEAM TITANS' artist Kevin Maguire. For some odd reason, I didn't end up using it as the cover of the next issue!  :-( 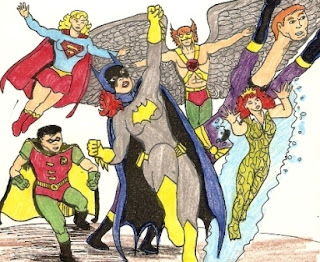