There were plenty of strong women characters on TV when I was growing up in the Seventies. I woul like to take this time today to talk about some of my favorites.
No conversation about strong television personalities can ignore Lucille Ball, but by the time I was cognizant and choosing what shows I wanted to watch (i.e., the Seventies), Lucy was mostly off the air. So she was never one of my favorites. I LOVE LUCY is a TV classic, and I may write about it some time, but it doesn't fit the theme of today's article. I do remember watching HERE'S LUCY (1968-74) on some Monday nights, though. This was her last show, co-starring an adorable Lucie Arnaz and Desi Arnaz, Jr. I recall very distinctly the episode where she tries on the diamond ring belonging to Elizabeth Taylor and Richard Burton but then couldn't get it off. I think the most memorable thing about this show was the Puppet Lucy that started the show, haha!

Speaking of Lucy, her co-star in the movie, "MAME" Bea Arthur was also a huge TV star in the Seventies on MAUDE (1972-78). I remember watching this some, but more for Adrienne Barbeau then for Bea Arthur, haha! She scared me, and I was never a fan of her sarcasm. I never watched her later series, GOLDEN GIRLS, either.
Another bossypersonality of the Seventies was Loretta Swit on MASH (1972-83). Margaret Houlihan started off as "Hot Lips," a shrill, opportunistic Head Nurse surrounded by men (in a cast of more than a dozen men, Swit was the only woman). By the end of the series, she was a more mature, emotionally open, divorced yet fulfilled woman. In many ways her character mirrored the changes going on in women's lives in the Seventies: she started out as dependant on a man but wanting independance, straining for an individual identity. And while I enjoyed MASH very much, Margaret was never my favorite character.

Of course, the most successful woman on US television in the Seventies was Mary Tyler Moore. Not only did she have her own show (1970-77), but her production company MTM (with a kitten instead of a lion; I loved that) was responsible for RHODA, PHYLLIS, WKRP, and dozens more. I always watched MARY TYLER MOORE SHOW but as a youngster it didn't really speak to me if you know what I mean. I was more entertained by BOB NEWHART, whose wife character was portrayed by the wonderful Suzanne Pleshette. I've since come around, of course, and appreciate MTM for being a warm, affectionate look at friends working together.

So which women *did* speak to me? I'm glad you asked! 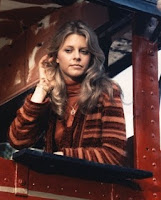 The first TV woman I really looked forward to watching was Lindsay Wagner on THE BIONIC WOMAN (1975-78). Jaime Sommers was a tennis pro and former girl-friend of Steve Austin (a man barely alive...). When she suffered injuries in a parachuting accidentshe was given bionic legs, a bionic arm, and a bionic ear (the better to hear you with, my dear). She made her debut on a special two-part episode of THE SIX MILLION DOLLAR MAN starring Lee Majors. However, for some reason I can't recall now, her mind fought against the bionic implants and she had to lose her memory so that she could survive. I remember how sad it was for her to wake up after her final surgery and have no idea who Steve was, even though they had planned to get married. Talk about a tear-jerker! She was so popular that she had her own series spun-off. According to legend, actress Lindsay Wagner was so concerned about being type-casted as a super-hero that her contract stipulated that she had to play different types of characters as Jaime goes undercover to fight crime. So she played a teacher, a college professor, a wrestler, and a roller-derby player, just to name a few. It made for some fun episodes. 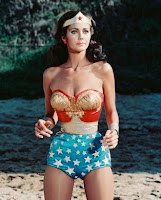 . No discussion of super-heroes on Seventies TV can be complete without mentioning Lynda Carter as WONDER WOMAN (1975-79). The original TV movie featured Cathy Lee Crosby in 1974. A year later the better known version made its appearance as a series of three TV movies set durin World War II. It became a series, but then switched networks (ABC to CBS) and time frames (WWII to the present). I have to say that although I watched it initially, after it became a series I was never a fan. Sure, I liked Lynda Carter. And I wanted to like it. But the stories got dumber, and the producers refused to bring in established bad guys like The Cheetah or Dr. Psycho. How many times were you going to watch Wonder Woman beat up spies and mad scientists? 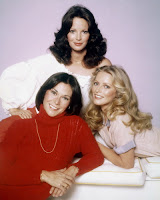 Two shows where you knew exactly what you were getting were CHARLIE'S ANGELS (1976-1981) and THREE'S COMPANY (1977-1984). Oddly enough, I didn't care much for the first year of ANGELS, with Farrah Fawcett. It was in the second year, when Cheryl Ladd joined with Kate Jackson and Jaclyn Smith, that I really started to watch it. These three were "my" Angels. I guess I was the only boy in America without a Farrah poster on my wall, haha! I was never  fan of the Seventies "feathered" hair look, for one thing. Give me long, beautiful, straight hair any day! I had a soft spot in my heart for Kate Jackson from when she played a nurse on THE ROOKIES, so she was my favorite. When she quit I stopped watching it.

As for THREE'S COMPANY, I was a fan of it when it first started, but after greed got into the act I moved on. The original set-up was of two women room-mates finding a guy needing a place to stay; he pretends to be gay so that the landlord lets him stay. Originally cast with Suzanne Sommers, Joyce DeWitt, and John Ritter as the room-mates and Norman Fell and Audra Lindley as The Ropers, the show was new and usually pretty funny. Then after the first year or so things started to happen. Joyce DeWitt permed her hair, making her less attractive to me. The Ropers moved off for their own short-lived series and were replaced by Don Knotts. I'm not a huge Don Knotts fan; his bug-eyed expressions just annoy me. And as a character, a swinging bachelor senior citizen is not as funny as a perve and his sex-crazed wife. And lastly, Suzanne Sommers wanted more money to stay; when she didn't get it, she walked. The chemistry of the cast was destroyed, and it never recovered.

One show that I never stopped watching until she retired it herself was THE CAROL BURNETT SHOW (1967-78). Carol Burnett is probably my favorite TV personality of all time. Not only was she incredibly funny but she was honest (I loved those "answer questions from the audience" segments) and she could sing adequately. Best of all, she surrounded herself with equally funny and talented people. Her variety show was one of the few shows that my whole family would watch together. "As The Stomach Turns" was her continuous take-off on silly soap operas. "The Family" was Eunace, Ed, and Mama facing various problems that later morphed into MAMA'S FAMILY. "The Later Show" was their regular parodies of old Hollywood movies which I tended not to know, but somehow still found funny. I mean, you didn't have to know "Gone With The Wind" to think Scarlett wearing a curtain rod in her dress was funny...it helped, sure, but it wasn't required. Harvey Korman, Vicki Lawrence, Lyle Waggoner, and Tim Conway were her supporting players, and a funnier group of comedian were not assembledon television until The Not-Ready-For-Prime-Time Players. Her show had wonderfully talented guests, too: I remember Ken Berry, Jim Nabors, the Jackson Five, Steve Lawrence, and Betty White all making guest appearnances. 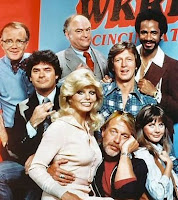 The last great comedy of the Seventies as far as I was concerned was WKRP in CINCINNATI (1978-82). This show was an ensemble cast with two equally wonerful women: Loni Anderson as Jennifer Marlowe, the receptionist, and Jan Smithers as Bailey Quarters, gofer-Sales Assistant-News Assistant. Jennifer got the big laughs with her visual high-jinks and arced eyebrows; Bailey got the character-driven laughs. Both were enjoyable additions to the otherwise male cast. Similar to the great "Mary Anne or Ginger?" debate, I couldn't pick just one! And that's my segueway to next week's topic...so be here,aloha! :-)